Investigative journalism requires the accumulation, synthesis and scrutiny of massive amounts of information. The connectivity and access to resources provided by the internet offers unparalleled opportunities for investigative journalists, but also major challenges. And it was with the aim of solving these challenges that people gathered for our first #newsHACK of 2019. Over two days teams worked to develop, ideate and prototype their solutions, before finally presenting them to a panel of experts as Thomas Hetherington reports.

To inspire and inform attendees the day started with a series of talks from industry professionals with unique insights. BBC News Labs Editor Rob McKenzie began by talking about BBC Africa Eye’s inspirational work in Cameroon. From there BBC Newsnight’s Manisha Ganguly discussed the way investigative journalists use social media and open source information to construct cases and trace their investigations. And Sophie Dyer and Hanna Rullmann from Airwars presented on the use of geolocation and aerial photography in their work with Amnesty International on the Strike Tracker project. The morning closed with two speakers from the International Consortium of Investigative Journalists (ICIJ). Soline Ledésert talked about her work developing the ICIJ’s Datashare project; a digital tool that aids journalists in searching through vast amounts of documentation with ease and speed whilst helping them collaborate on investigations. Simon Bowers then ended the morning’s talks by presenting on his work collaborating across borders with international colleagues.

Around the room there were a variety of ideas and prompts, both inspired by the morning’s talks and collected from participants beforehand, and attendees grouped around the ideas they wanted to explore. Teams were formed from a vast array of organisations and institutions meaning that students, start-ups and national newspapers were all working together on an eclectic range of prototypes. After a session of facilitation lead by R&D Connected Studio’s very own Bronnie McCarthy, the teams set to work hacking. At the end of the second day the six teams had each created a prototype to present to our panel of experts …

A visualisation tool for the exploratory analysis of datasets. Investigative journalists often come to datasets trying to prove a hypothesis or looking for specific information. Beetlejuice used visualisations to help journalists uncover these as well as find new correlations. Beetlejuice offered users a different way of looking through massive amounts of data by visualising the datasets and the correlations that occurred within.

This team were looking to solve the problem of having to locate and investigate a specific individual with a common name (e.g. when trying to trace a money trails between a politician and donor) as Companies House doesn’t distinguish between people with similar names. They created a tool that cut down the repetitive task of searching individual data and document entries multiple times with the AI giving users results clustered according to the matching names.

Certain countries only let residents make freedom of information (FOI) requests, this tool helped to arrange collaborations across borders. Users would query which country they want to put an FOI request into, the tool then would search (using a slackbot) and link the user up with an correspondent with similar specialisms in that country who would be able to process the FOI request.

This team asked how we might allow journalists to explore and find connections between entities in datasets (here displayed as organisations and people). They actualised this in a tool that used an elastic search with a finished experience that highlighted common results within entity groupings in a user friendly interface.

This tool was created with the aim of boosting capabilities for local investigative journalists: a research hub that supported active local communities of journalists in sharing knowledge. The team put a lot of thought into building a community of practise around the tool and how they might achieve this by pairing up experts and new users. 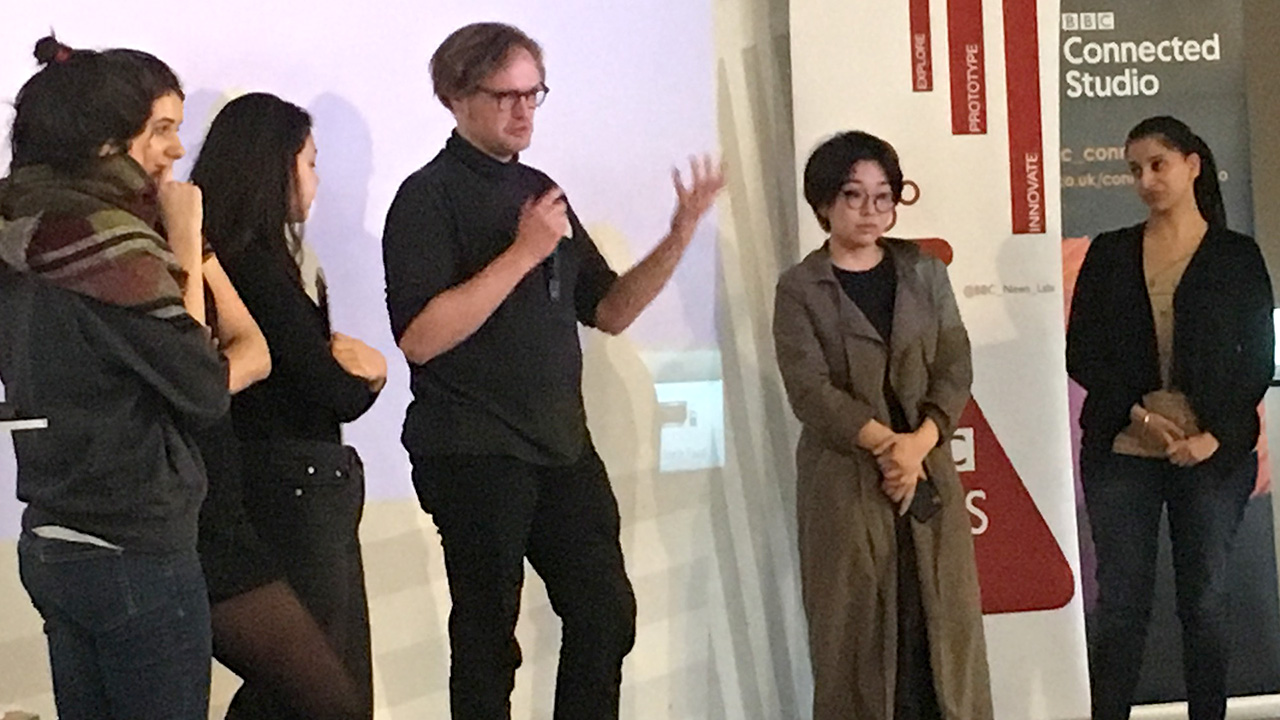 “What’s going on? Where’s it happening? And who can we contact?”

This tool made use of the vast amount of data on social media to help investigative journalists take full advantage of geolocation. It let the user know when and where an event is happening using Instagram story highlights, snapmaps, # keywords etc. It creates a location based time stamp search engine, cross referencing across social media.

Unlike previous #newsHACKs there were no awards given, but rather our two experts (BBC News Lab’s Rob McKenzie and the ICIJ’s Soline Ledesert) quizzed the teams on their ideas and gave suggestions for development, and points for further discussion. The day ended with a chance for attendees to continue mixing and chat about their ideas over drinks and snacks before taking their tools back to their workplaces and companies to continue innovation.

If you are a news organisation or a research institute we are looking for people to join us at our next #newsHACK - Tools for Multilingual Newsrooms.