Later this year, BBC Click will be celebrating their 1000th show with a personalised, interactive episode, built with BBC R&D’s StoryKit - a new web-based authoring and playout toolkit for responsive storytelling. Matthew Brooks, Project Lead for StoryKit, explains how this came about, and its significance for object-based media production.

Over 15 years, Click has pioneered new ways of telling stories, from 360 video and Virtual Reality through to making shows entirely on mobile phones.

Now, using our new cloud-based tools, they're going interactive! In a special, first of its kind experiment, you'll be able to experience an episode of Click that's unique to you, based on your interests and tailored to how you want to experience the show.

While our previous object-based experiences have all been co-productions between specialist engineers in R&D and content creators, we've always known that for these tools to succeed, they needed to be used independently of the people that built them.

What's particularly exciting and important for us about this production is that Click is creating their interactive episode independently from BBC R&D. It's a true test of our ambition to create accessible tools that can be used by the people that create our brilliant content, without them having to dive into the world of software development.

In the spring of 2017, when we started creating an authoring capability for object-based media, Click were at the forefront of our thoughts as potential future users of our tools. We love the show and know they are keen innovators. A programme about technology with a worldwide audience would be the ideal place to demonstrate the responsive storytelling approach we've been championing.

Fast forward to the autumn of 2018 - we were still building StoryKit. It was bigger and more complex than we had imagined. As a team, we had learned a lot, but development had been difficult, and any thoughts of a high profile production team using our tools were pretty distant.

Then, out of the blue, we were contacted by Laura Taflinger from Click's production team. She'd heard about our work and wanted to arrange for Nick Kwek, one of Click's presenters, to interview me. Between takes, I spoke to Laura and Nick about the idea of the Click team building something using StoryFormer, the authoring component of StoryKit. They took the idea to Simon Hancock, series producer. This lead to a meeting with the wider team, and a demonstration of the capabilities of the tool to Click producers Stephen Beckett and Talia Franco.

After some hands-on time with StoryFormer, it was clear that Stephen and Talia understood the potential that the tool offered them. They went on to explore various treatments for the show, matching StoryFormer's responsive storytelling mechanics with the individual stories they want to tell.

The design is all their own - we gave them the tools to express their ideas, and they ran with it at an impressive speed. 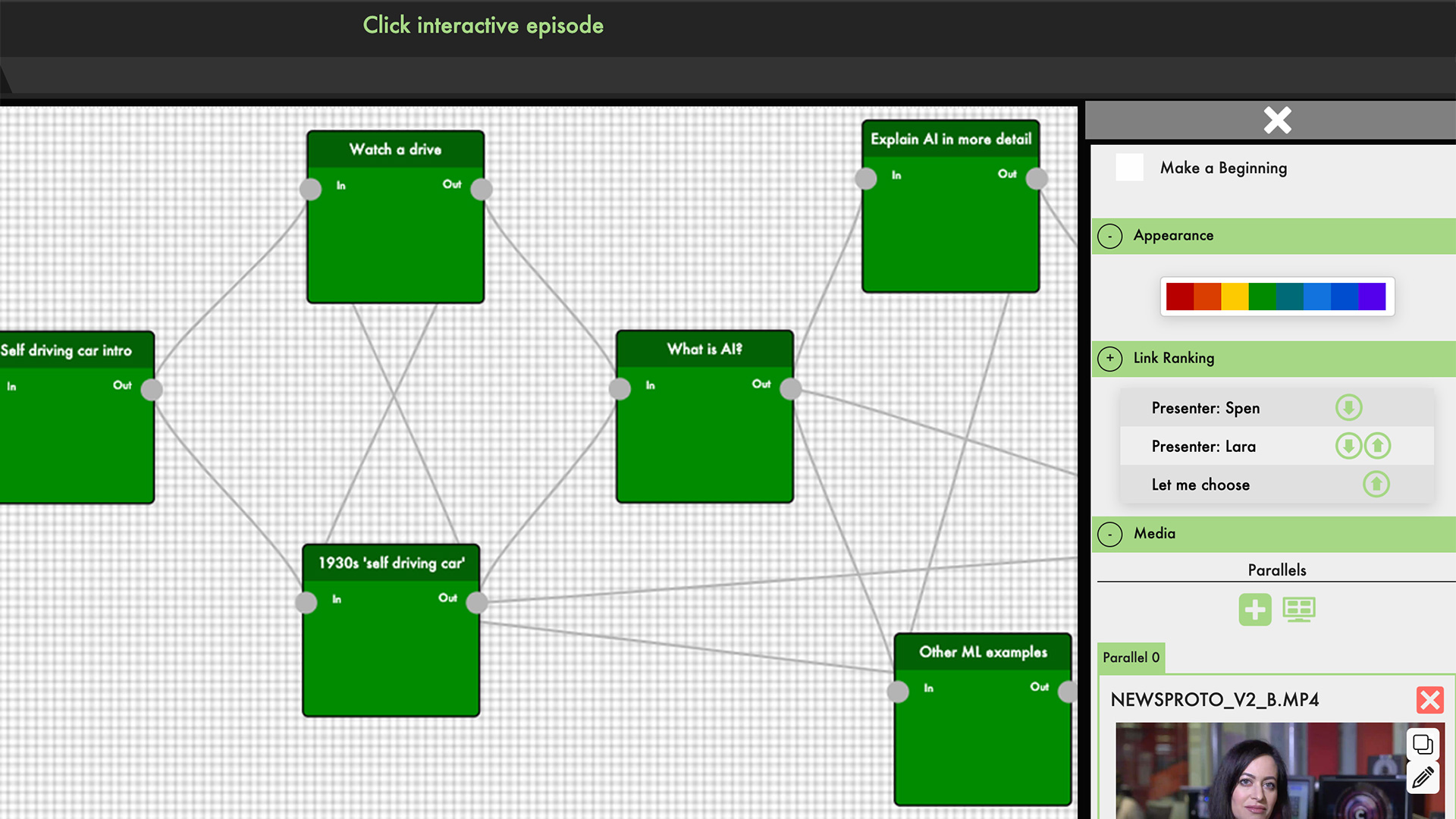 This is the milestone R&D has been working towards for almost two years: enabling a community of practice to explore object-based media through extending their existing skill sets, rather than involving our engineers and the development of bespoke code. Our hands-off approach in the production of this episode is an indicator of how well we have achieved that goal.

It's been hugely beneficial for StoryKit to have an experienced, innovative production team using it. Click's feedback has led to considerable improvements in the workflow, user experience, and user interface of StoryKit for all potential tool users. Thanks to Click's input, stories can be constructed and edited faster, media can be browsed intelligently, and most importantly, the audience experience has been improved.

The launch of this episode is also an enabler for our research into how the audience interacts with these experiences. Because StoryKit technology has detailed, anonymised analytics built in, every playthrough of the episode will aid our understanding of how successful the interactions are in servicing the storytelling, and serving the needs of each individual audience member.

As Click proclaimed in their announcement, they think that an object-based media approach “could change how we make factual content forever”. Applying this approach to factual content could allow production teams to structure complex and difficult subjects in ways that everyone can engage with, and explore at their own level of understanding.