Working with our project partners in the 5G Smart Tourism project, we successfully completed the first public trial of our AR application at the Roman Baths, Bath, on the evenings of 10th and 17th December 2018. Over 100 visitors experienced reconstructions of the Baths at key moments in history, on a mobile AR app. High-quality 360 video was streamed over the project’s network, that included the first UK deployment of a 60GHz mesh network.

Following final testing of the network by our partners at the University of Bristol and CCS, we installed the latest version of our AR app onto 20 Samsung S8 phones and charged them ready for the arrival of the first set of visitors. 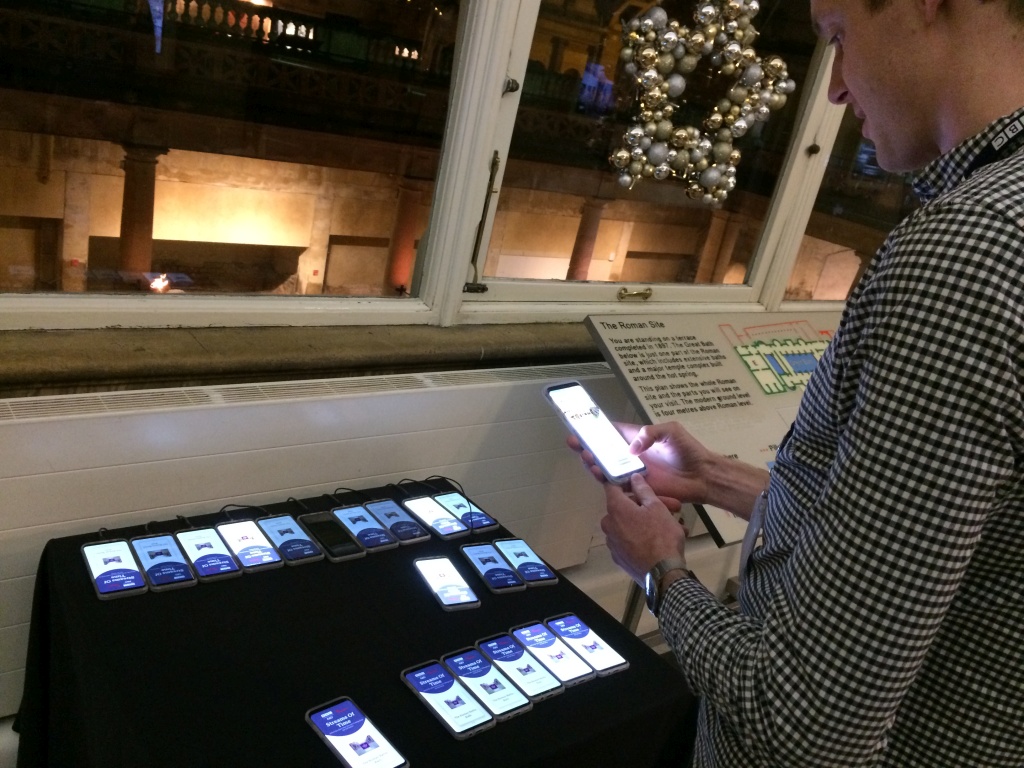 As visitors arrived, they were briefed about the event and given a handset to use. As they walked around, they stopped at each of the three locations that had a ‘trigger image’ for a particular time period, and used this to launch the experience. 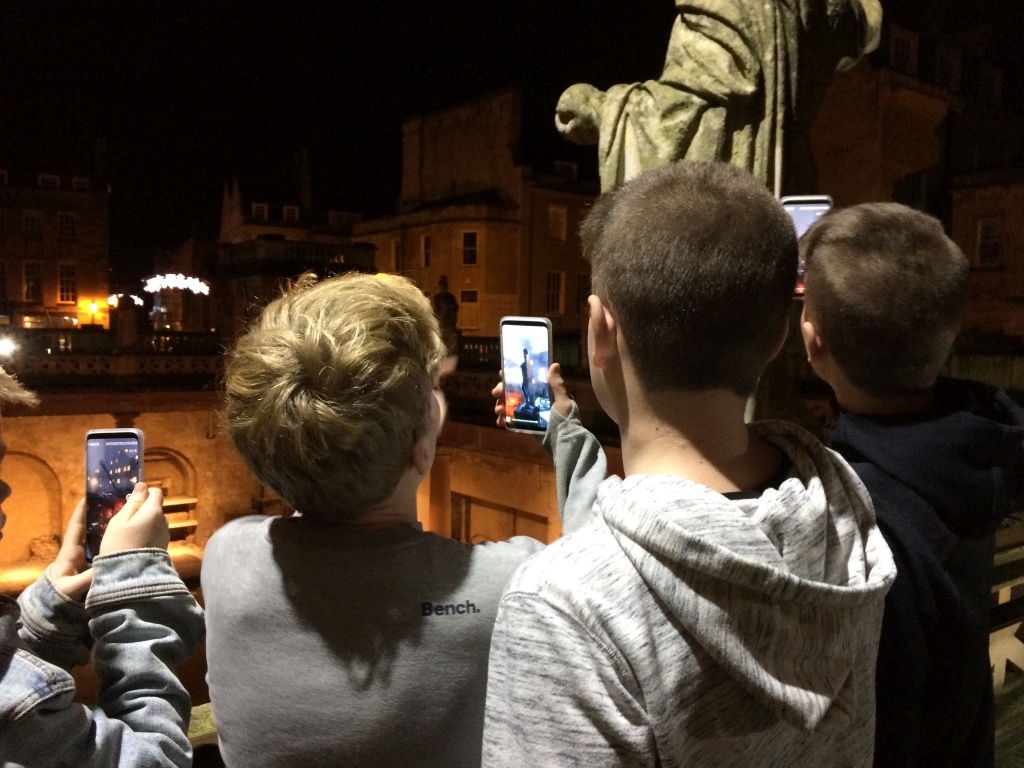 After months of testing in the lab, it was great to see the historical reconstructions ‘in situ’, standing at the actual position that matched the viewpoint into the 3D modelled scene. The high accuracy with which Aardman had modelled the Baths made it easy to relate what the app showed to what was directly visible. 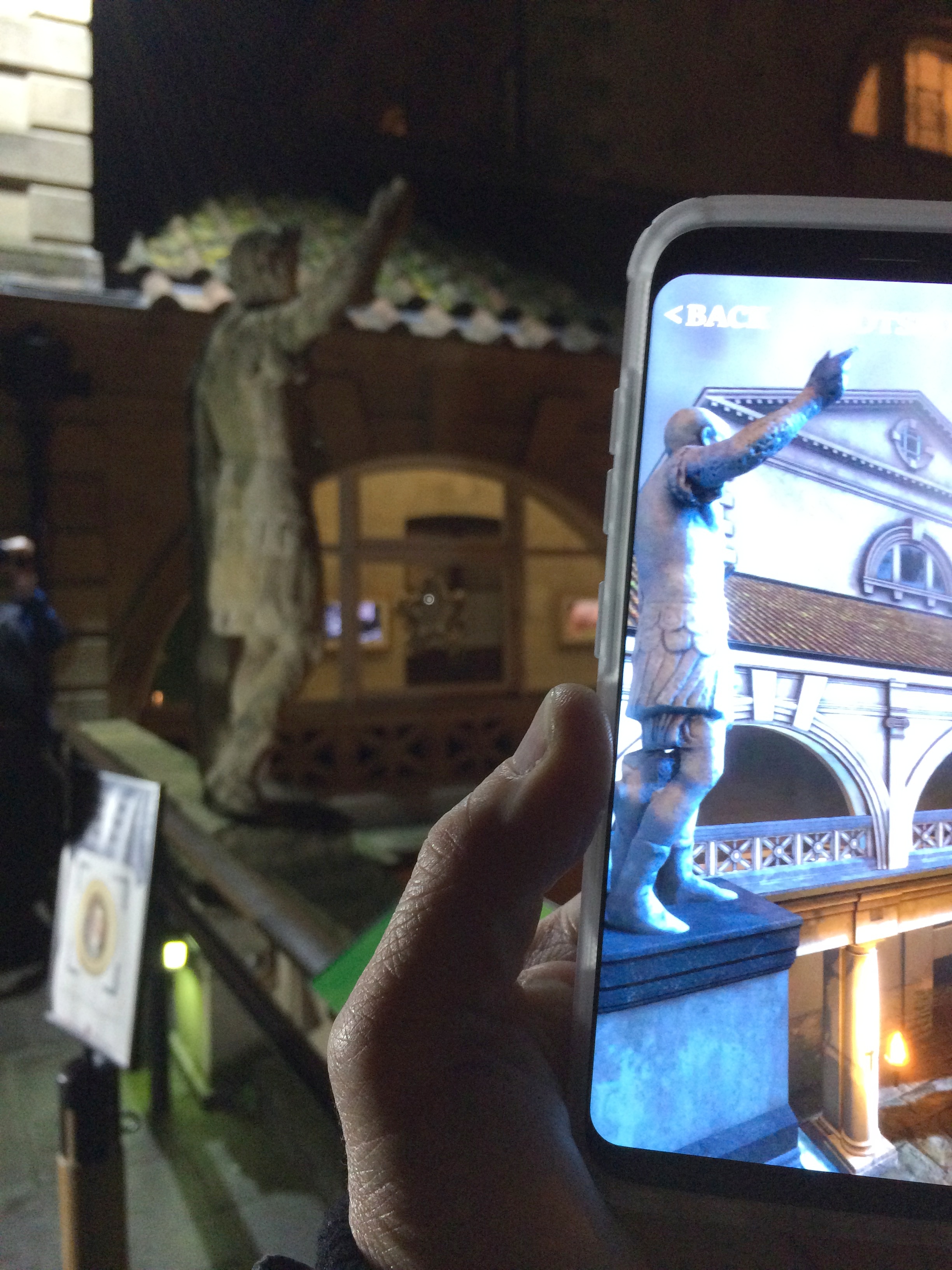 All the project partners were very pleased with the performance of the network and the app. Using heterogeneous connectivity technologies including mmWave, fibre and wi-fi, The University of Bristol’s installed network was able to deliver throughputs in excess of 600Mbps with latencies less than 10ms to handsets in the Roman Baths. CCS were able to validate the new 60GHz mmWave mesh technology in a live real-world environment. The trial helped them understand and prove 60GHz mmWave in dense urban canyons using small-form factor radios in a sensitive and historic city location. The CCS nodes provided the trunk link between the Roman Baths and the Guildhall to the 5G core network, which validated the IP/Ethernet end-to-end interoperability requirements. The live trial generated a large amount of high bandwidth video traffic which the 60GHz mesh was able to deliver, and latency over the mesh was maintained at less than 1ms which is an important 5G performance indicator, setting it apart from existing 4G and LTE.

In addition to performing detailed network performance measurements, we also did a simple comparison between using the project’s infrastructure and using the Roman Baths’ normal visitor WiFi network with data hosted by a commercial cloud provider. It took less than about 1 second for the video to start playing when using the project network, but over 30 seconds when using the existing infrastructure. This isn’t really indicative of the benefits of 5G specifically over conventional networks but does show that what we were successfully demonstrating was well beyond what the existing infrastructure could easily deliver.

We captured lots of feedback from the visitors and we’re currently analysing this. However, comments were overwhelmingly positive, with over 80% of the visitors saying that they would be more likely to visit a museum if it offered these kind of experiences.

We’re looking forward to the next set of trials in March, when we hope to test remote rendering technology.