News Labs, the BBC’s innovation team, has been through a lot of change this year, writes Allison Shultes.

For one, we have moved to more structured project cycles. With three new projects kicking off every eight weeks, the team has built more prototypes and been able to either validate or invalidate new ideas at a faster pace.

We have also placed a stronger emphasis on hypothesis-driven investigation and user-centred design. We put some of our more polished experiments through formal user testing with members of our audiences, ensuring that our projects are fulfilling the goals they set out to achieve.

Here’s a look at some of what we’ve accomplished in 2018, as well as a few projects we have lined up for the New Year.

Giving control to the audience

Our team has been exploring how “atomising” news content might lead to more personalised experiences for our audiences. We built a tool for journalists that turns long-form “explainer” articles into embeddable chatbots, giving readers more control over their content. This has allowed us to scale up our in-article bot pilot, helping engage readers on stories from the Oscars to the gender pay gap.

Similar in concept, our "TV Slicer" and "Radio Dicer" projects segment broadcast programmes into individual stories, letting audiences skip to pieces that they find interesting and relevant. Both use fuzzy matching technology to align time-coded machine transcripts against the written programme scripts.

We also helped Research & Development’s New News team launch a series of innovative article designs on the BBC News website. The formats attempt to address the news habits of some of the BBC’s hardest-to-reach demographics: Generation Z, or the under 35s. Both designs give consumers options for diving deeper into news stories, based on what they’re most interested in or find most confusing.

And we continued to brainstorm new ideas for driving deeper engagement with BBC journalism. We held an industry-wide hackathon this summer on reaching young audiences, addressing research from the Reuters Institute for the Study of Journalism and the BBC’s Marketing and Audiences team on news consumption habits of the under-35s. 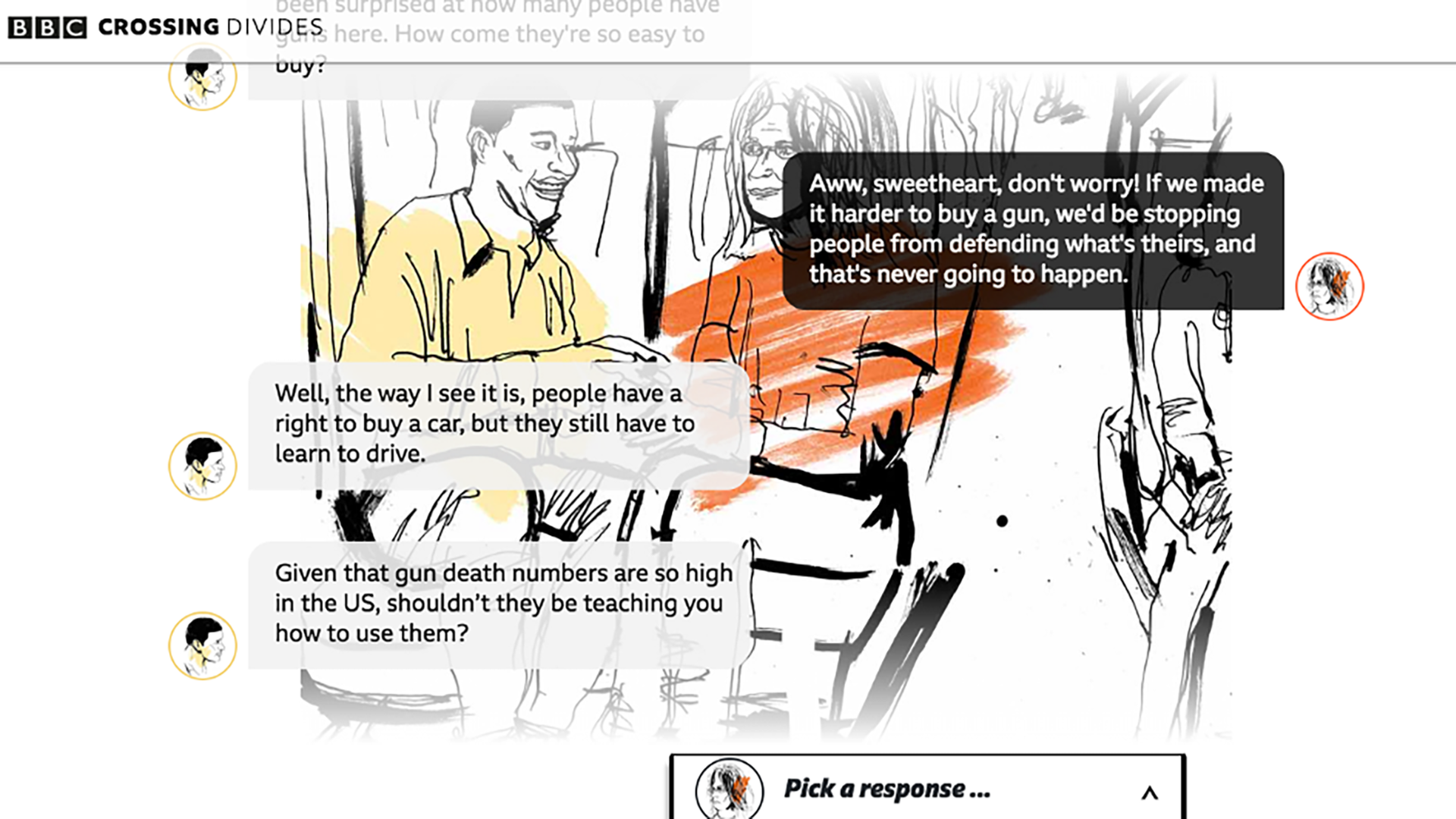 In addition to experimenting with personalised news formats, we also explored new visual storytelling mediums. We teamed up with the World Service to build an interactive messaging game for Crossing Divides, a week-long series of solutions journalism about individuals forging connections in a polarised society. The game tries to teach players new skills for talking to people whose views they disagree with. It was shortlisted for the Association of International Broadcasting’s Innovation Award this autumn.

Our initial work on AMP Stories, Google’s new format for its open-source Accelerated Mobile Pages project, also made its way in front of BBC audiences. News Labs was asked to test the format for the BBC, starting with a series of stories for the Royal Wedding this summer. The prototype tooling that we customised has been passed on to the Visual Journalism teams in London and Delhi, so that audience testing can continue. 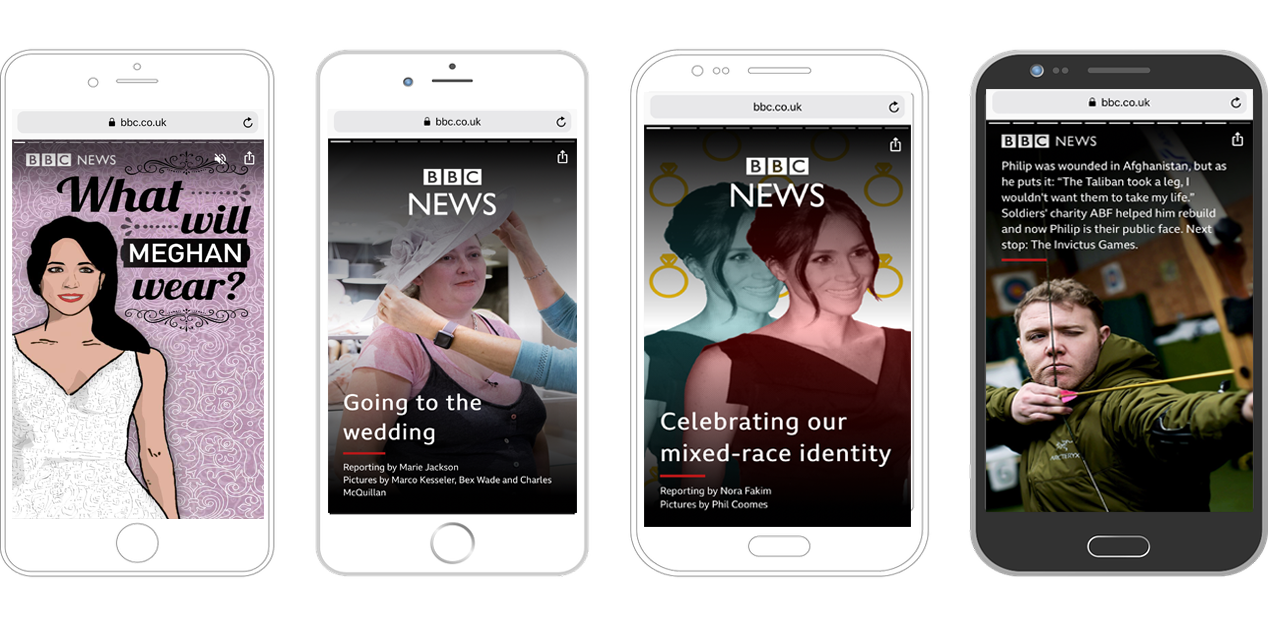 We also successfully transferred a prototype for delivering BBC News on voice-controlled devices to a production team. Our work on voice, which began in the spring of 2017, includes both an audience-facing experience and a journalist-facing tool for producing content for voice platforms. The end result is an interactive experience that gives audiences new ways of navigating through audio content.

News Labs has a portfolio of experimental tools that make life easier for journalists — particularly through using speech-to-text technology. This year we got back to basics, building and launching a web app called Octo Core that allows users to upload audio and video files.  It then emails them back an automatically generated transcript. While we’ve proven in the past that speech-to-text can be used for more complex functionality (such as video editing from text), we have been working towards a more user-centric approach to our projects. Octo Core addresses a central need within our editorial teams: producing fast, low-cost transcripts that can be used when making documentaries or shorter pieces for radio, TV and online.

We also worked to make web videos more accessible with a prototype called Subtitalizer. Subtitalizer uses speech-to-text to transcribe video content, and then pre-segments the transcript into subtitles that meet BBC style guidelines. This has the potential to radically speed up workflows, saving editors time they now spend counting individual characters in each hand-typed subtitle. As a result, more of our videos can be subtitled and made accessible for online audiences.

After years of championing the potential of speech-to-text technologies, we hope that 2019 will be the year in which they move out of News Labs and R&D into mainstream production.  Our colleagues in some of the core production teams are now working hard to turn our ideas into properly supported products available to the whole BBC.

We continued to look into how we might help journalists provide better onward journeys from BBC News articles. Our Depthfinder prototype allows journalists to search for high-value reporting (think longer “explainer” articles, such as this Brexit Q&A) related to their stories. By making it easier to find related reporting, Depthfinder provides a more human-centric way of recommending better onward journeys than our earlier 2016 experiment, External Links Manager (ELMer).

We’re nearing the end of two major language technology research collaborations. Our partnership with the University of Edinburgh on “Script” will conclude in January. The project is researching new ways of generating synthetic voices in three languages: Hausa, Swahili and Bengali. These can be used to easily create voice-overs for videos produced in other languages, as we’ve demonstrated in the past with our Alto prototype.

We also started to wind up our work on Summa (Scalable Understanding of Multilingual MediA), a three-year project funded by the EU’s largest innovation programme, Horizon 2020. The Summa consortium has been exploring how language processing technologies can automate the analysis of media streams. The goal is to make it easier for journalists to monitor a wide range of foreign language news sources — from television and radio to social media posts. 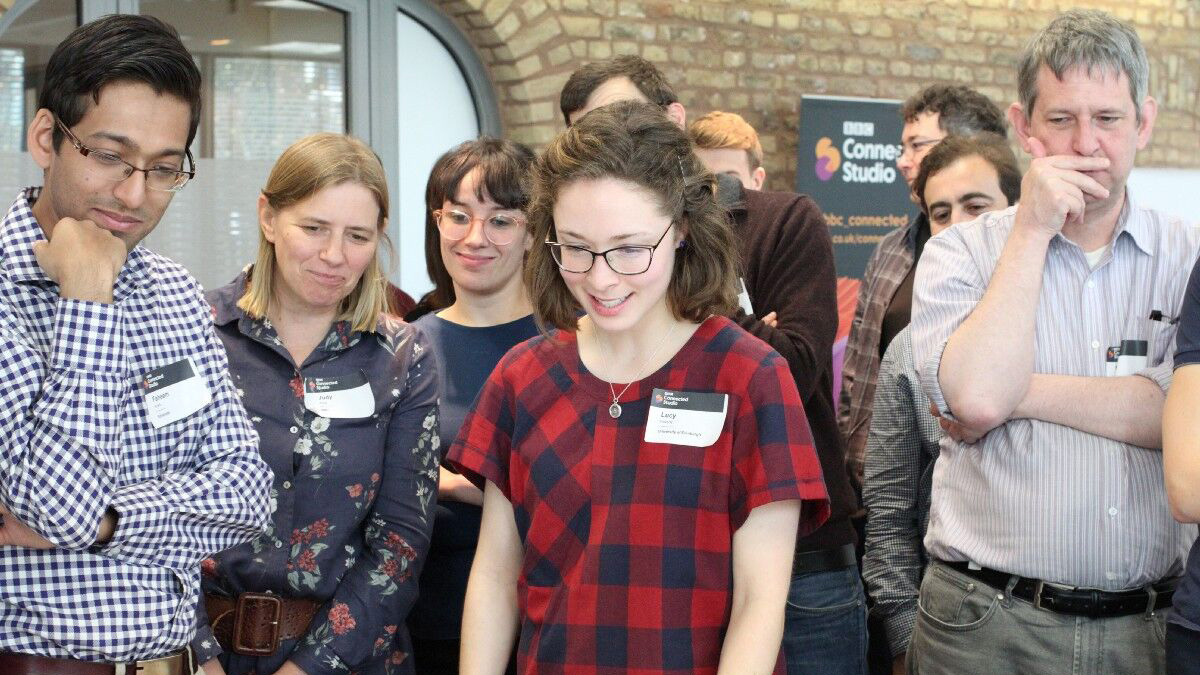 Participants share ideas for new tools at the Summa hackathon in Bonn, Germany

With the project coming to an end in January, we focused on how Summa technologies can be used to build custom tools for newsrooms. We hosted a hackathon in Bonn, Germany, to brainstorm new applications of Summa services with teams of academics, developers and journalists. And a small team within News Labs has built a series of prototypes designed specifically for BBC journalists. “Speedboat” allows journalists to search automatically-generated transcripts of six Arabic television channels for keywords. And “Sandcastle” uses an algorithm to help predict trending stories across the BBC’s language services — alerting editors when it spots articles that haven’t yet been translated into their language.

In addition to our research partnerships, we’ve also continued to engage with the wider industry through our outreach events. We learned how other newsrooms tackle challenges such as product transfer, stakeholder buy-in and idea generation at first Unconference on media innovation.  In collaboration with BBC Connected Studio we opened up thinking on conversational journalism at SXSW.  We also partnered with the US-based nonprofit, the Open News Foundation, to host an Unconference on journalism and technology during Mozilla Festival. We’re hoping to continue producing events that facilitate knowledge-sharing not just on technology, but on the culture of innovation. 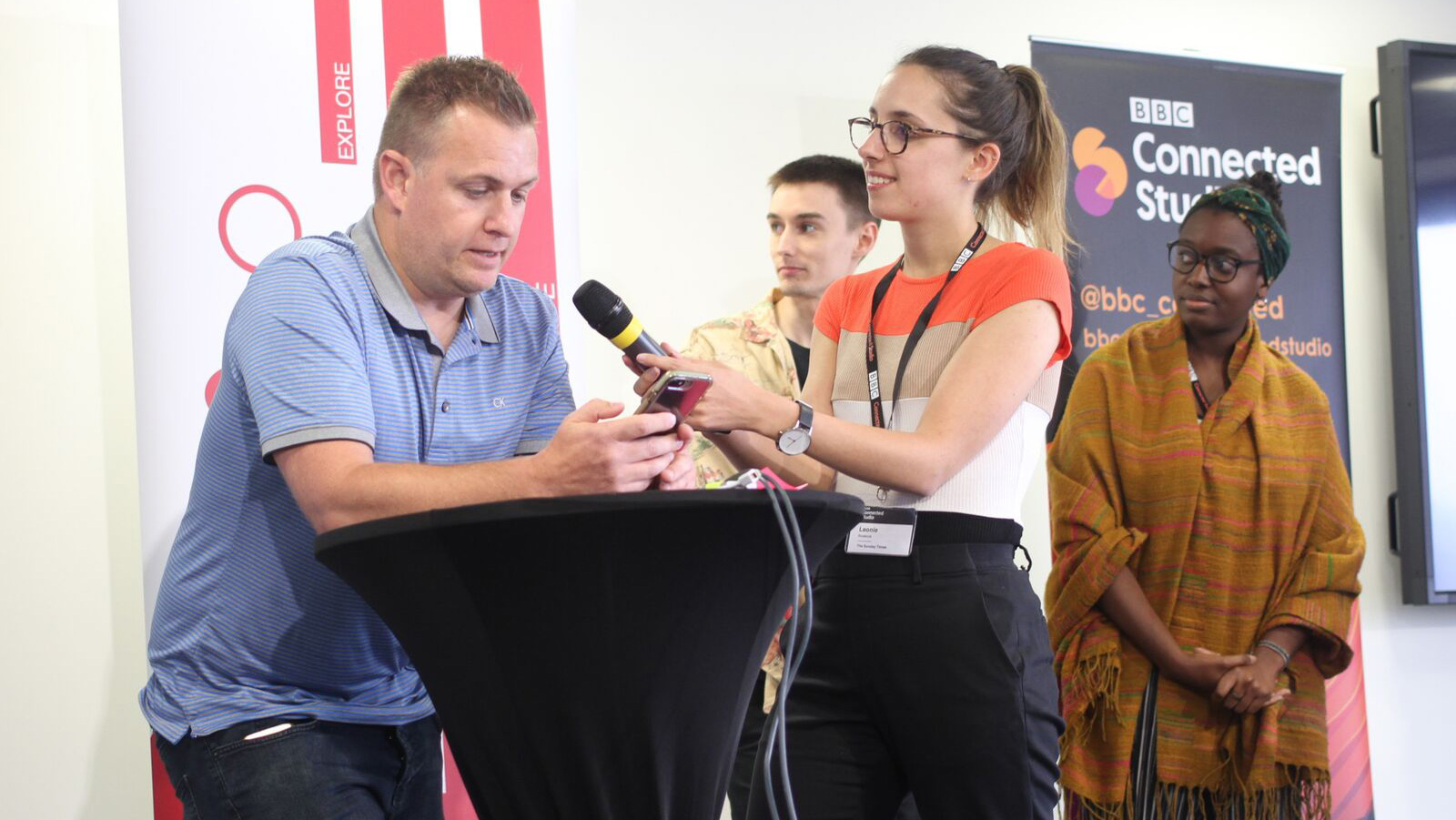 Teams present their ideas at one of our #newsHACK events

With the help of BBC Connected Studio, we hosted Text A/V, an annual conference that promotes a shared understanding of how automated transcription technologies can be used for storytelling. And as part of the “Beyond Fake News” season we partnered with the World Service to host a hackathon in Delhi, India, exploring new ways of tackling misinformation on social platforms.

Finally, we invited journalism and computing students from universities across England to Broadcasting House for a two-day hackathon called University Challenge. Four teams worked together to design and build news experiences for voice platforms with the help and support of our team.

We're wrapping up a great first day at our University Challenge hackathon  Super impressed by all of the students thinking up new news experiences on voice devices pic.twitter.com/35XaKBZmri

Although it’s difficult to predict exactly which technologies we’ll be experimenting with in 2019, we do have a handful of projects that we’re looking to carry forward. We recently started investigating how structured journalism might allow us to automatically produce local news stories, in collaboration with BBC English Regions. We’re eager to continue exploring natural language generation and structured journalism in the new year.

We’re also excited to be kicking off two major collaborative projects in the field of language technology, building on the momentum of Summa and Script. “GoURMET” (Global Under-Resourced Media Translation) is a three-year, EU-funded project that will investigate how neural networks can be used to translate less widely-spoken languages. This research will help guarantee that tools using machine-assisted translation can be used by all of the BBC’s World Service teams — not just those delivering news in the largest and most commercially available languages. We’ll also be continuing work that kicked off this autumn on “MT Stretch”, an initiative that compliments GoURMET and looks at how we might help develop new methods of translating less common languages. 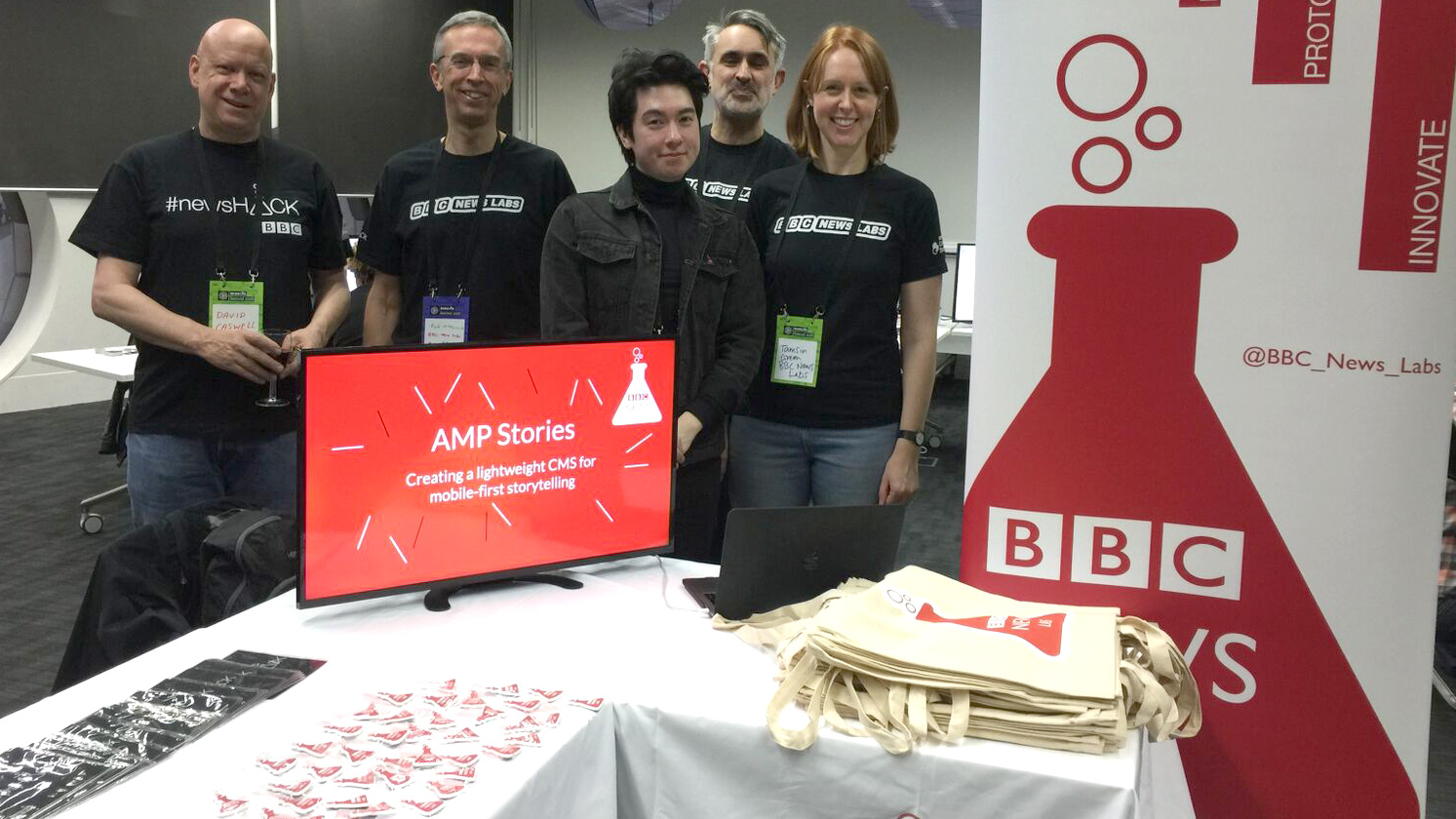 Want to get involved? You can follow us on Twitter, read about our projects on our blog or get in touch via email.