BBC Music Day celebrates the power of music to change lives with a diverse range of music events and broadcasts across the UK involving established artists and a wealth of grassroots community groups. Over a thousand events took place this year involving 100 external partners and 100 BBC production teams. Kylie Minogue took over train announcements, 40 choirs performed at 40 train stations, and Blossoms, Amy McDonald and Gabrielle entertained commuters on the day.

BBC Research and Development partnered with the event to support the audio-visual coverage of BBC Music Day 2018 through conducting a first, early-adopter trial of COGNITUS: an innovative production tool that captures, aggregates and enhances user-generated mobile phone video footage for broadcast use. The COGNITUS technology was developed as part of a European Commission H2020 funded grant in collaboration with a number of broadcast and research partners across Europe. 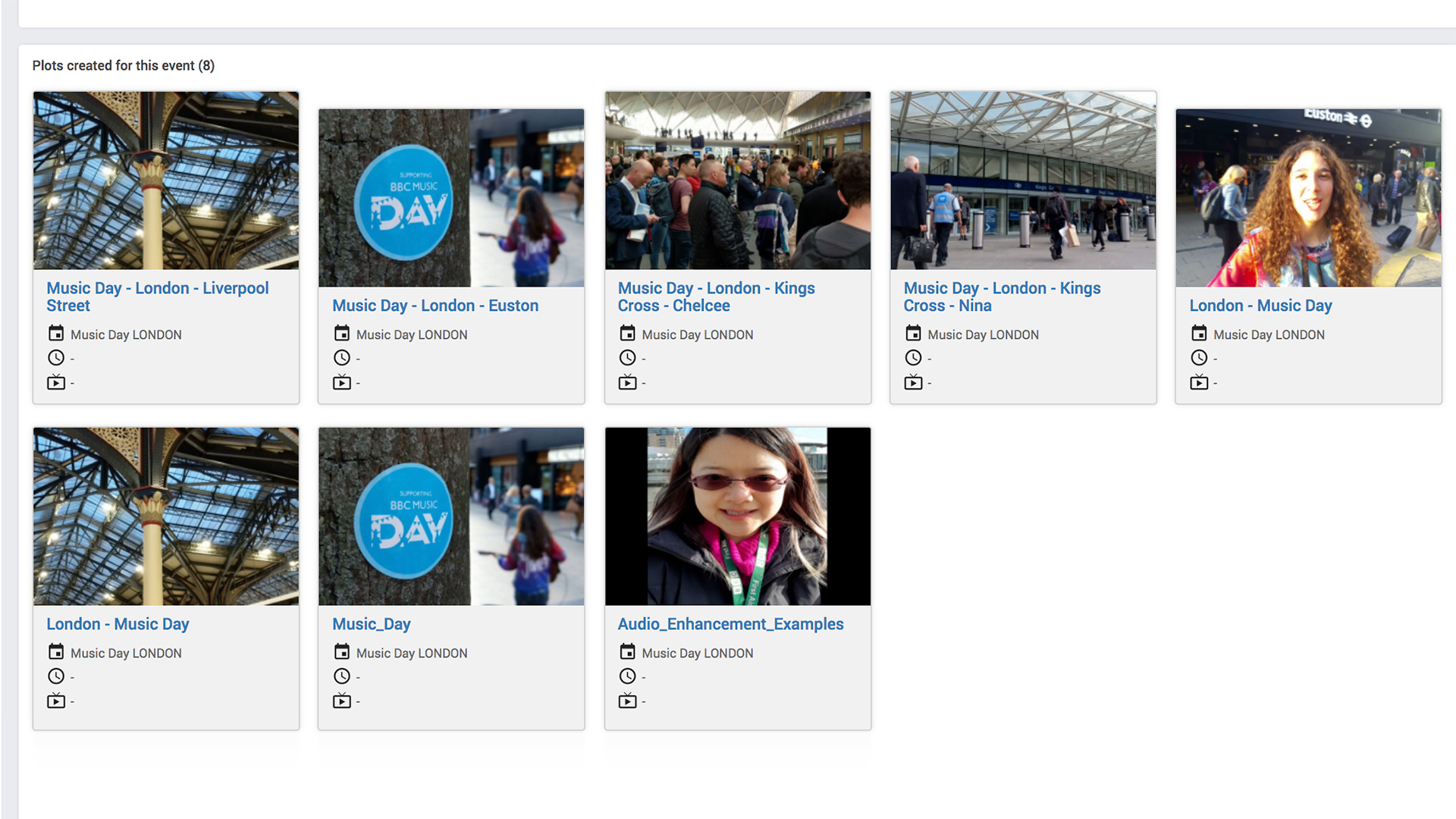 BBC Music Day featured a large number of performances that were often in large, busy public places. This meant that it wasn't practical, or feasible from a cost, logistics and resource perspective to have film crews attending each location.

The nature of BBC Music Day means that there is a strong desire to reflect activity in a timely manner, and this was no different this year as a BBC 'live page' was used to reflect the wealth of activity as it happened across the day. Traditional high resolution broadcast footage is difficult to physically deliver quickly in situations where there are significant geographical distances involved, and limited or unreliable access to wi-fi and data connections. Large amounts of rushes (especially with high resolution file sizes) also pose problems in terms of quickly and efficiently locating suitable and relevant shots for quick turn-around situations that live page coverage dictates.

Despite these limitations, we still wanted to capture as much of the activity as possible, to highlight and recognise all the participants and their work. However, it was equally as important to maintain standards to reflect and protect the BBC’s brand image and output quality.

COGNITUS offered a strong potential solution, with its low-cost operation, functionality, ease of operation, workflow and technical capabilities. Another advantage is the design that allows producers from a base location to easily locate footage through a clear system of meta tagging that is inputted by the app user on location, and reflected in the producer tool web interface. 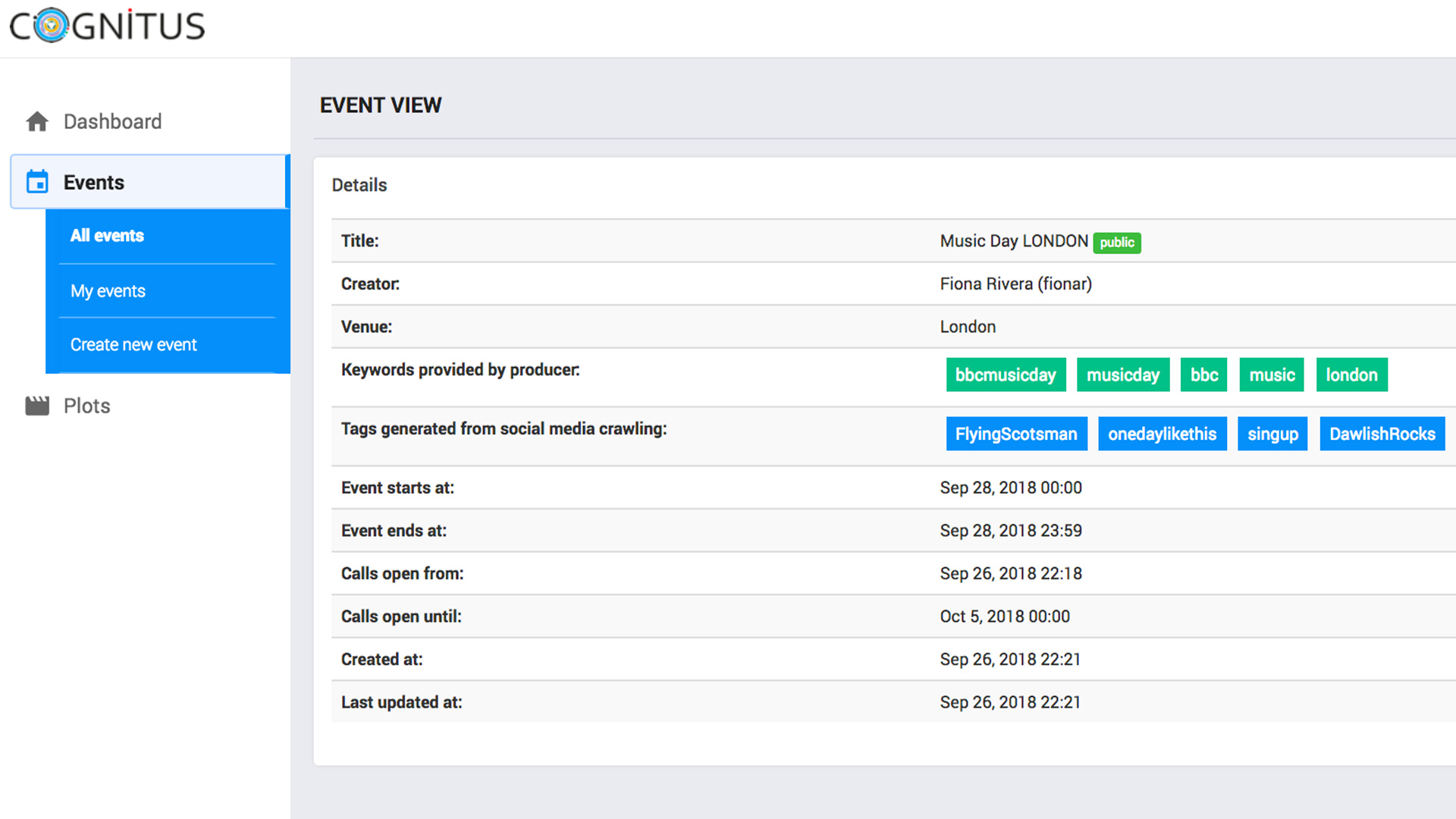 For BBC Music Day 2018 we hosted a number of volunteers on a BBC internal placement scheme that were tasked with capturing video content from external locations that had scheduled music performances using COGNITUS.

In the week leading up to the event they were given an overview of the COGNITUS project, and a practical, hands-on demonstration of the mobile app and the production tool web interface by members of the BBC R&D team. They then had the opportunity to test out the mobile app, taking mobile phones out on location to shoot footage, which was then reviewed back at base to share technical and creative feedback on how the tool functioned and how to get the best out of it. After we gave them a creative and editorial briefing for BBC Music Day activity, the volunteers were then ready to head off to their events.

Armed with the COGNITUS app, knowledge of the production process and editorial guidance, the volunteers went to their designated locations on Friday 28 September to capture the activity.

COGNITUS allows production teams to create their own requests for video contributions which then appear on the app as named events.  This meant that, in addition to the face-to-face briefing, we also added creative and editorial guideline bullet points for each BBC Music Day event location. These points show up as prompts in the events on the app for a helpful guide and reminder to users about shot selection, length and content before they start filming. The volunteers also had a lanyard to help identify them, which included the editorial notes as well as health and safety guidelines. 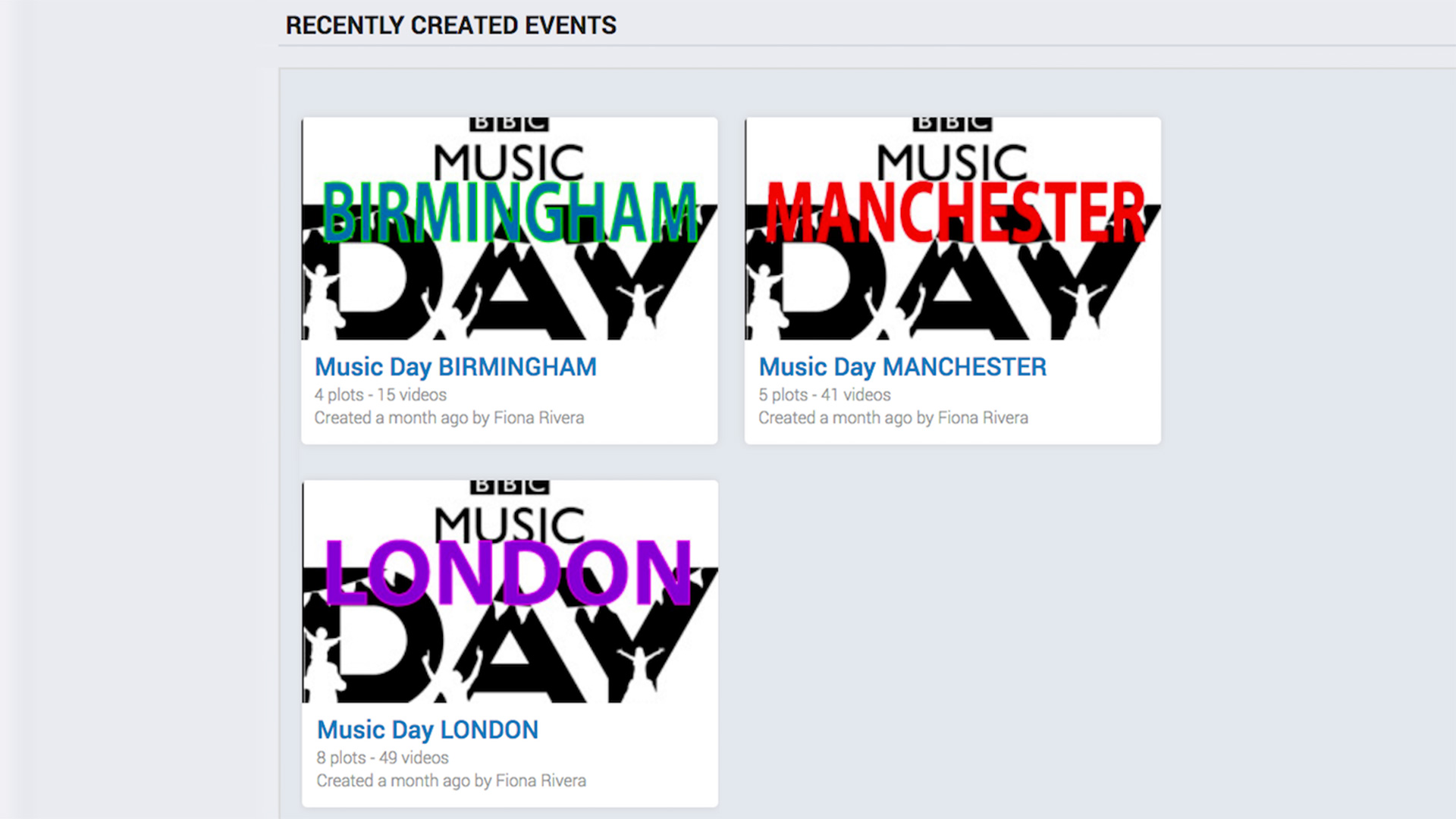 Messaging groups were set up between the volunteers, producers and technical support to allow for technical queries to be raised and addressed, and editorial guidance to be exchanged (eg “can you get a shot of…”, “are we okay to film…” etc). The volunteers also had consent forms to ensure video clips and vox pops were cleared for use.

These groups proved very useful for getting instant feedback and addressing queries on the spot, which helped producers back in the office gather relevant clips, and solve any issues whilst still on location. 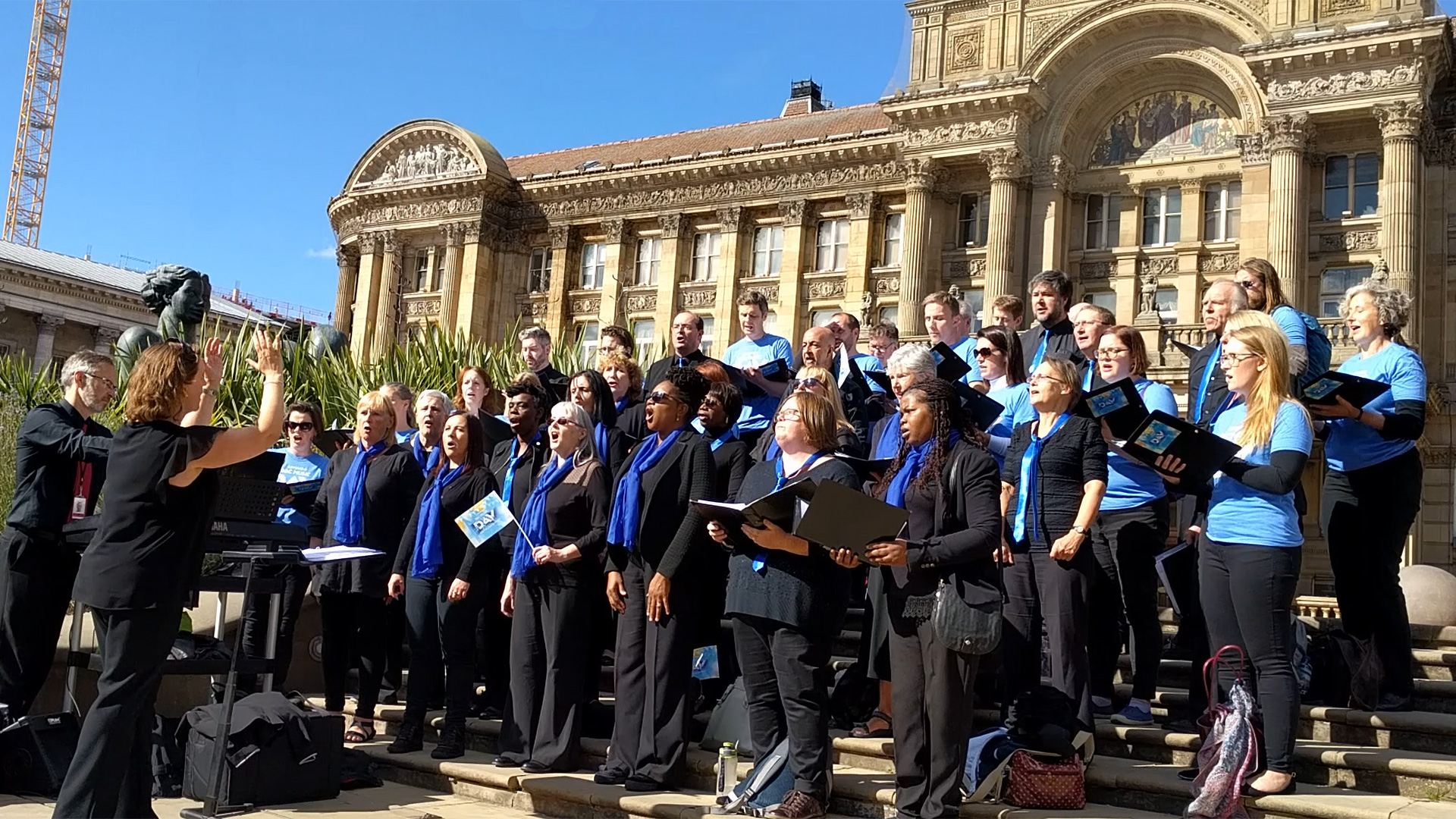 BBC Music Day delivered a huge wealth of engaging content, and because of the app's usability, plus COGNITUS' clear workflow, metadata input capabilities and image and sound enhancements, we had a good system and process for capturing and publishing high quality content across the day.

We received a good number of video clips that we could both publish as short, stand alone extracts on the BBC live page on the day itself (sometimes while the activity was still in progress, which was one of our objectives), and edit into highlights sequences after the event, allowing time for the full UHD processing to be completed to improve the output further.

The in-app ability to trim (top and tail) clips made turn-around time even quicker, as the users on location could tweak stand-alone clips to remove any unusable material at the beginning and end of each shot, which made them ready to use without the need for offline editing, and also reduced the processing time as it shortened the clip. 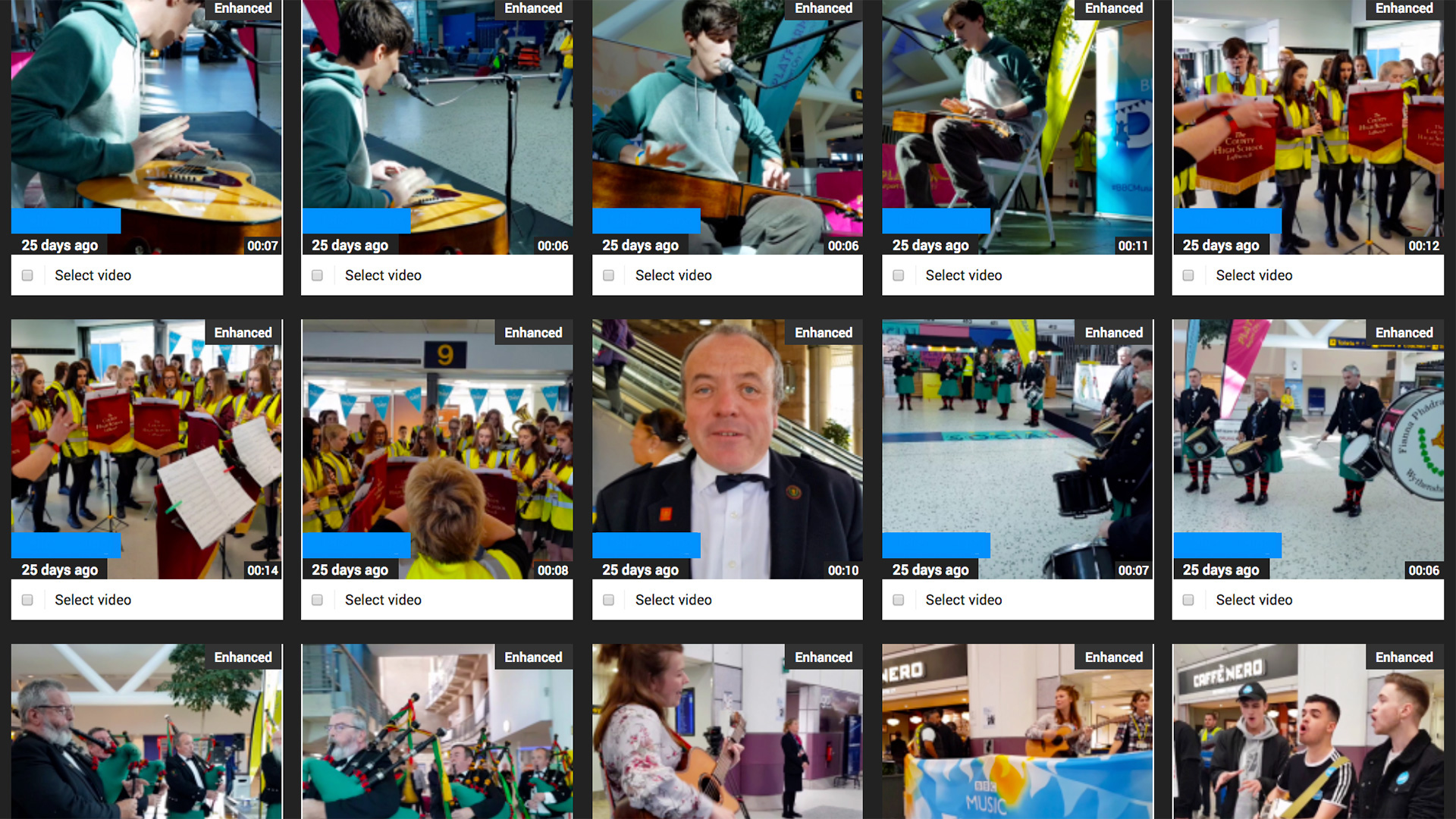 COGNITUS has a modular workflow which enabled the BBC R&D team to easily customise the system for BBC Music Day. Since a rapid turn around of the clips was required, the BBC team were able to prioritise what enhancement processes the clips went through to maintain a balance between high quality enhancements.  This still meant improving aspects such as motion-blur, camera-shake and sound enhancement, so these quick turn-around clips still benefitted from the COGNITUS ingest.

The clear tagging of clips by users within the app made it easy to source specific shots, and to check details (such as if consent had been recorded) which helped speed up the process of publishing content.

As part of the creative briefing to the volunteers, we made recommendations that made the process easier and more efficient. These included encouraging users to keep clip lengths to 10-20 seconds. This allows for a quicker upload, and then makes it easier to tag - as clips have a more specific focus. Where this was more difficult was for longer interview and vox pop clips, we recommended users utilised the in-app option to save the video, and not immediately upload it for processing.

One slight restriction of COGNITUS is that it is not currently possible to amend the order that clips are queued for processing, so longer or unwanted clips can block up the production flow. This will be made more flexible in future to help with prioritising clips and improving workflow and speed.

Overall the partnership proved to be hugely successful, with BBC Music Day benefitting from a time, cost and resource efficient method for covering an expansive and complex schedule of events and activity, whilst BBC R&D were able to stress-test COGNITUS in a live production environment, gaining what we hope is valuable insight and feedback from new users operating out in the field. It is a very powerful and exciting piece of technology, and hopefully tests will continue, and it can progress towards being adopted and utilised as a valuable tool within the broadcast industry.