We evaluated the performance of two of the most promising emerging video coding technologies currently being developed and compared them with HEVC. We tested the royalty-free AV1 specification developed by the Alliance for Open Media (AOMedia) of which BBC R&D became a member in 2016.  AV1 was built using Google’s VP9 specification as a base and similarly to VP9, AV1 follows the typical hybrid block-based approach also used in the standards from the MPEG/ITU family, like HEVC. The complete first version of the AV1 specification is expected to be finalised by the end of June 2018.

Full results of the performance tests discussed in this post - including details about the test conditions, sequence specific video compression performance and complexity evaluations have been published in our IBC 2018 paper entitled “An overview of recent video coding developments in MPEG and AOMedia”

We also tested the latest video coding technologies being proposed within the Joint Video Exploration Team (JVET), a joint MPEG and ITU group created to explore new tools with video coding capabilities beyond HEVC. The reference software used in the exploration phase of JVET, called Joint Exploration Model (JEM), was used in our performance tests. This software was leveraged as the base for the JVET work on the development of a new video coding standard that will succeed to HEVC, to be known as Versatile Video Coding (VVC). Even though JEM was created as an exploration software model, many of its tools are likely to be included in the final version of the VVC specification, expected to be completed by the end of 2020.

The overall compression performance of these two emerging technologies was analysed based on both objective and subjective tests. This provided indicators on how the achieved bit rate savings measured with objective quality metrics translate into subjective quality advantages. The tests were performed using HD and UHD video sequences representative of typical broadcasting content.

Overall, the results obtained show, in general, a similar performance between AV1 and the reference HEVC software, HM, both objectively and subjectively, for the considered test conditions. JEM, on the other hand, seems to outperform both HM and AV1 by approximately 30%, proving that higher compression efficiency can be achieved and will likely be available as part of a future video coding standard in the longer term. A general summary of the subjective bitrate savings for the adopted test conditions is shown in the plot below. 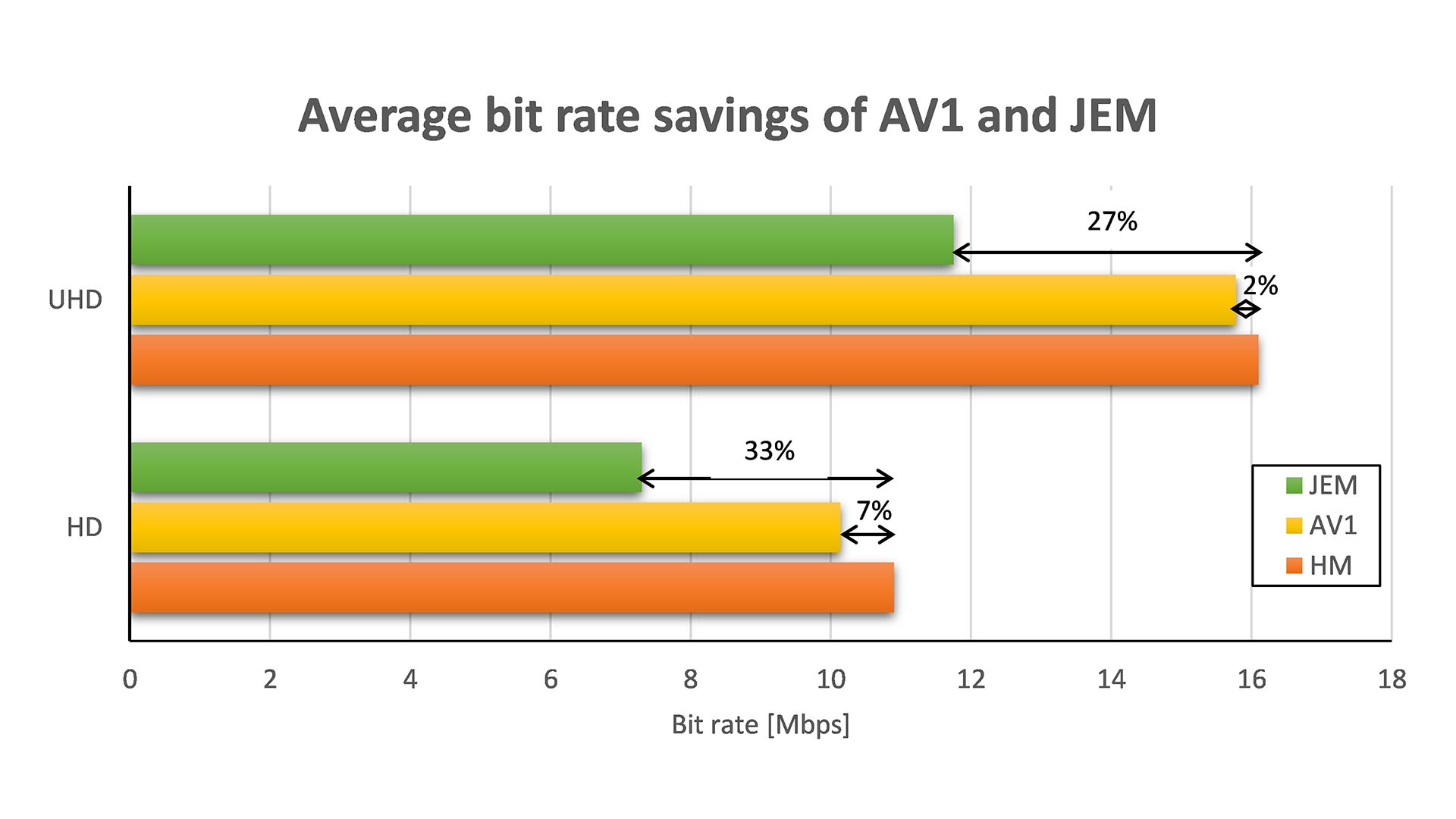 The numbers in the plot above represent the average bit rate savings obtained for all sequences used in the subjective evaluations. These bit rate savings were computed for the overlapping quality intervals obtained after performing a subjective evaluation of the quality of each sequence when compressed with two of the three tested video compression technologies (HM, AV1 or JEM) with 4 different bitrates/qualities. This overlapping interval is highlighted in the figure below for an example test sequence. The quality in the vertical axis is measured using Mean Opinion Score (MOS), which is the average quality score given by the test subjects after watching the compressed video sequences at different qualities/bitrates. 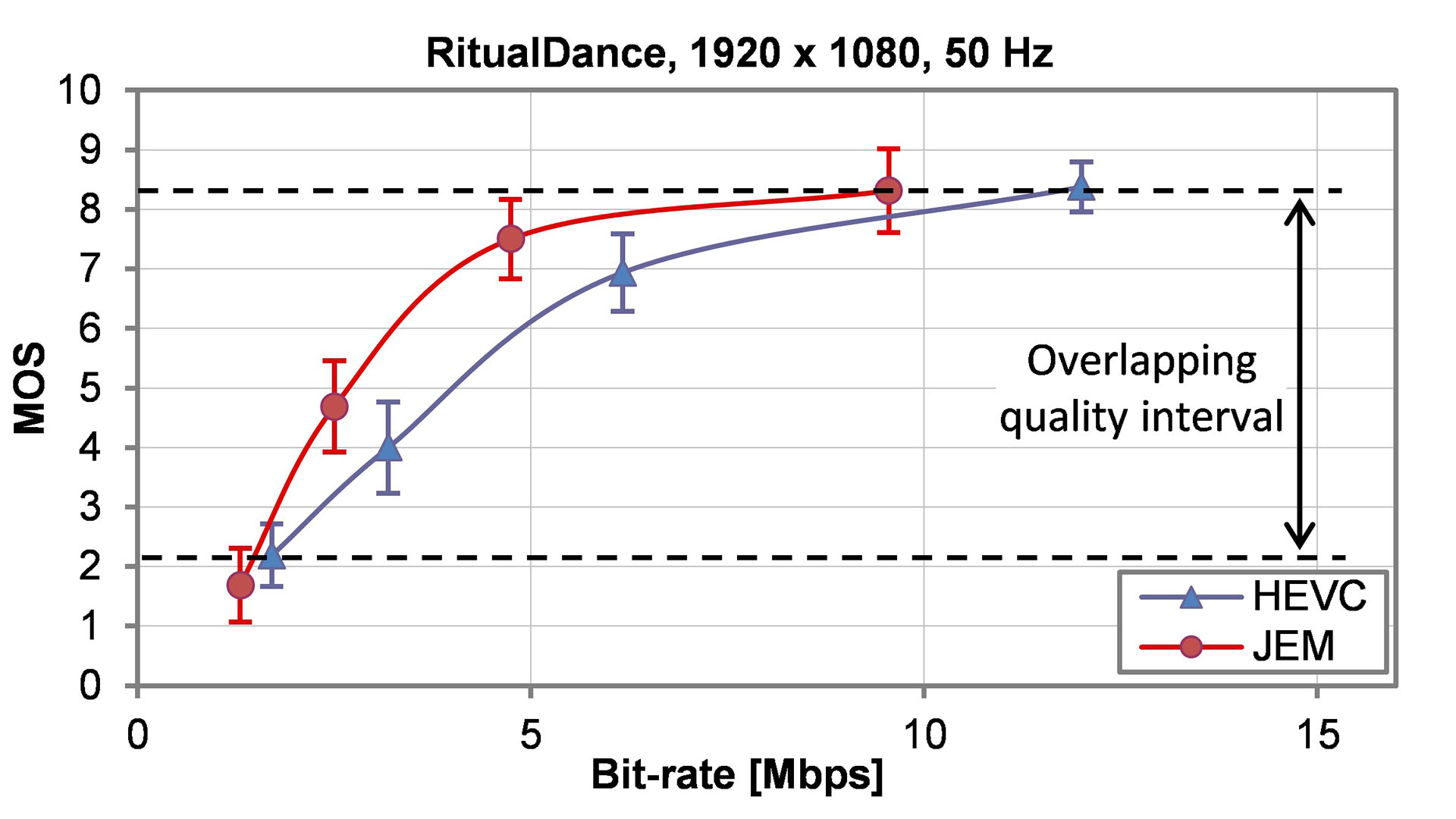 The associated encoding and decoding complexity of both technologies was also analysed. Since typically higher compression performance is achieved at the cost of higher complexity at the encoder side, delivering the expected bit rate savings may be challenging. In our tests, both AV1 and JEM show higher decoding times than the reference HEVC implementation, as expected. The same was observed for the encoding time, even though in this case, AV1 shows significantly higher complexity than the remaining implementations tested.

The full results of these performance tests are going to be published in our IBC 2018 paper entitled “An overview of recent video coding developments in MPEG and AOMedia”, where more details about the test conditions, sequence specific video compression performance and complexity evaluations are presented.