Alexandra Palace was home to the BBC television service, which launched in 1936. Through decades of pioneering work, teams of producers, performers and engineers built the powerful medium we know today. After closing in 1980, the studios became severely derelict and the historic spaces are no longer accessible to tell their story.

Television’s Hidden Home takes viewers on an interactive Virtual Reality journey through the BBC spaces at Alexandra Palace, using archive images, sound and video to uncover their history. The project is a fantastic opportunity to embrace that legacy of innovation with current teams at BBC R&D, and reflect on the significance of their work in the context of the wider cultural network built by the Civilisations Festival. James White is the consultant Curator for Alexandra Palace, and has written about the project for BBC R&D.

History of the BBC - The Birth of TV - Ally Pally

There have been numerous attempts to restore and reopen the Alexandra Palace studios, including as part of our current restoration project. When the project was rescoped in 2017, we were once again faced with the challenge of opening access to these important spaces without being physically able to. We also recognised that the story of the birth of television has a broader appeal. We wanted to find a tool that would be available to everyone and in which we could take viewers on a narrative told by the spaces themselves.

Virtual Reality is a medium that is still developing, so it seemed appropriate to the studios’ story to give a sense to audiences today of how viewers might have felt tuning into television for the first time in 1936. Building the app itself threw up many parallels. When the BBC first arrived at Alexandra Palace, the spaces they found were derelict Victorian dining rooms. Today the studios are derelict again and access is restricted. Fortunately the 360 degree camera was lightweight and portable so we were able to capture parts of the building that are not likely to ever be secure enough for public access, such as the Producer’s Gallery. 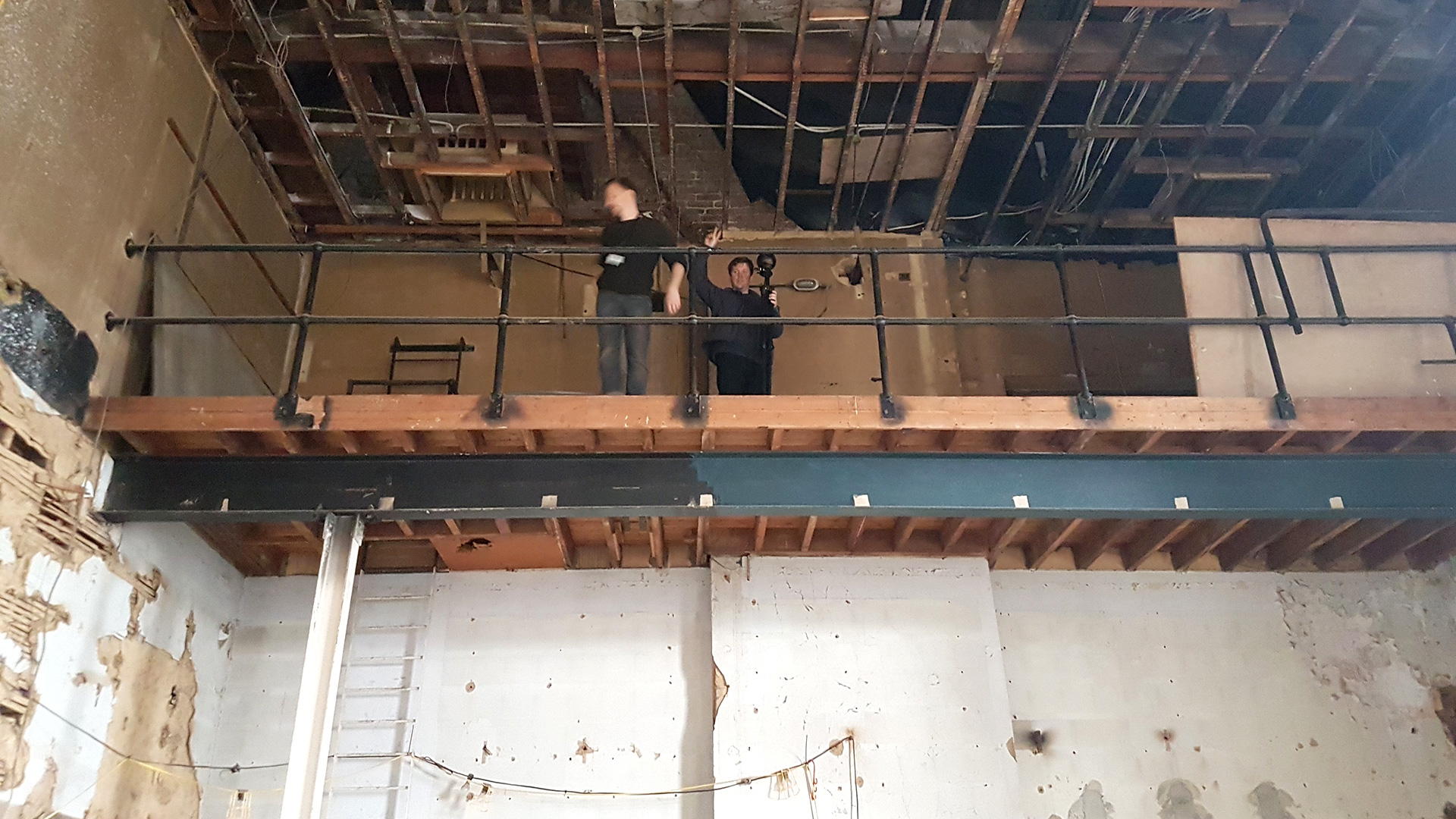 Recent construction work had secured some spaces that had been too hazardous previously, such as Studio B where the first broadcast took place. However, many of the spaces are still without lighting and power so we had to improvise during production. We used small LED lamps and grip tripods which were surprisingly effective in giving highlights to areas of importance and contributed to the urban exploration aesthetic.

It was an interesting learning curve to figure out how to encourage viewers to look at the complete space, but draw attention to one or two areas of significance; making sure that the experience felt immersive but not overwhelming. Although we had areas of interest in mind when shooting, it was not until well into the post-production that we realised how effective layering content and augmenting the environment could be. 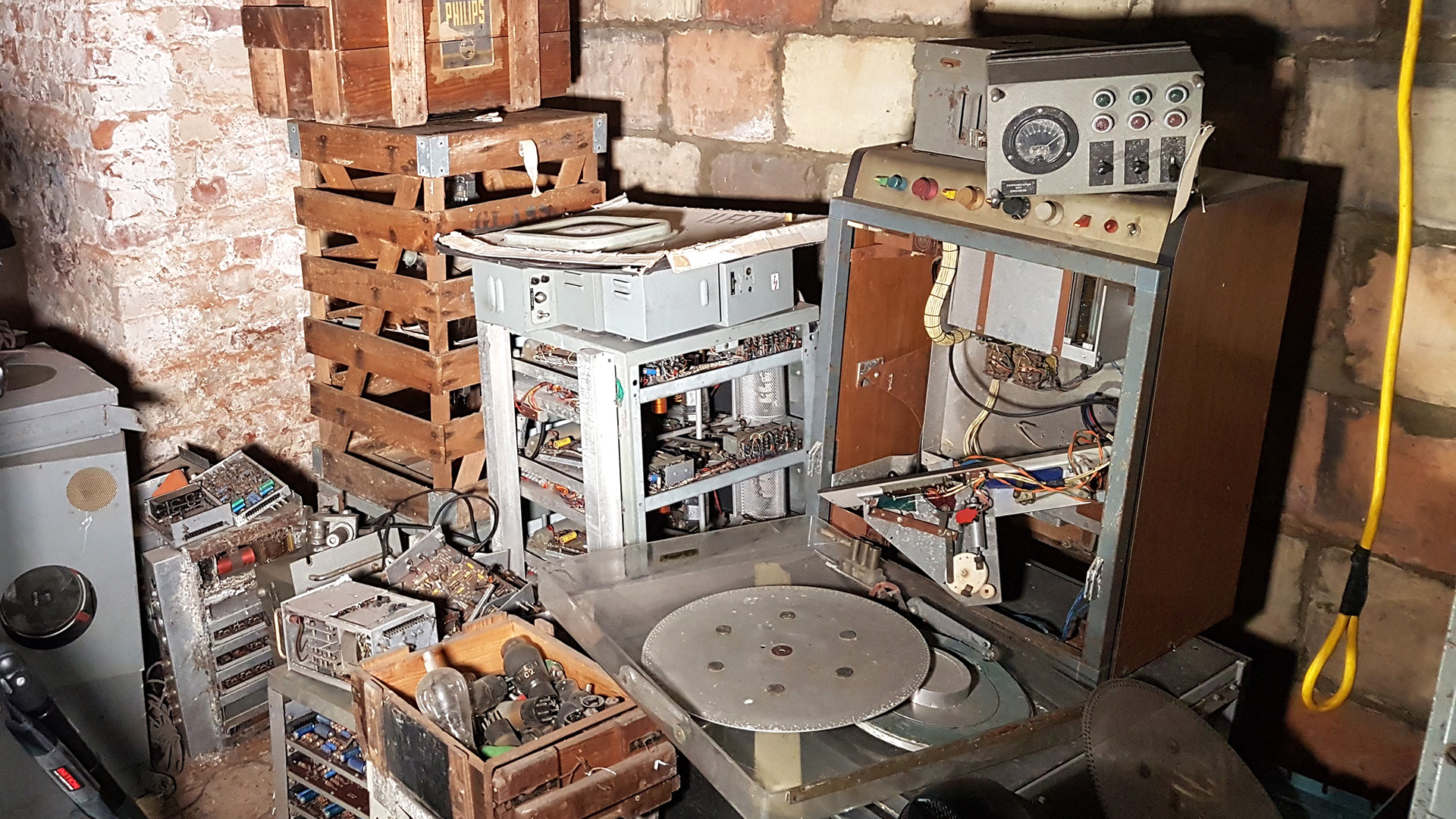 We were blessed with a rich source of content that helped to communicate the history of the spaces. A 1936 radio tour of the studios from the BBC Archive gave us background noises of the hustle and bustle of the era, that could be mapped to the exact rooms they were recorded. With so much of the original infrastructure stripped away, it helped to evoke a sense of time travel in the spaces, which cannot yet be achieved onsite. Taking that one step further we mapped content to the walls of the spaces, creating an experience unique to VR. It was important to us that the tour use the medium of VR and not replicate a physical visit.

Post-production relied on close collaboration but remote working. I was based in London, whilst Producer Mark Fothergill was based at BBC R&D in Manchester. Following the initial shoot, all work was done ‘blind’, myself writing content, finding assets and recording voiceover, whilst Mark had the more challenging job of actually building the app, grading, stitching and creating flow through the scenes. VR allowed us to experiment with moving content, taking voiceover explanations from one space to another to refine the viewer journey in a way that linear filming would not allow. However, the mechanics of 360 meant that we relied heavily on exchanging written notes, with only one review possible before releasing. 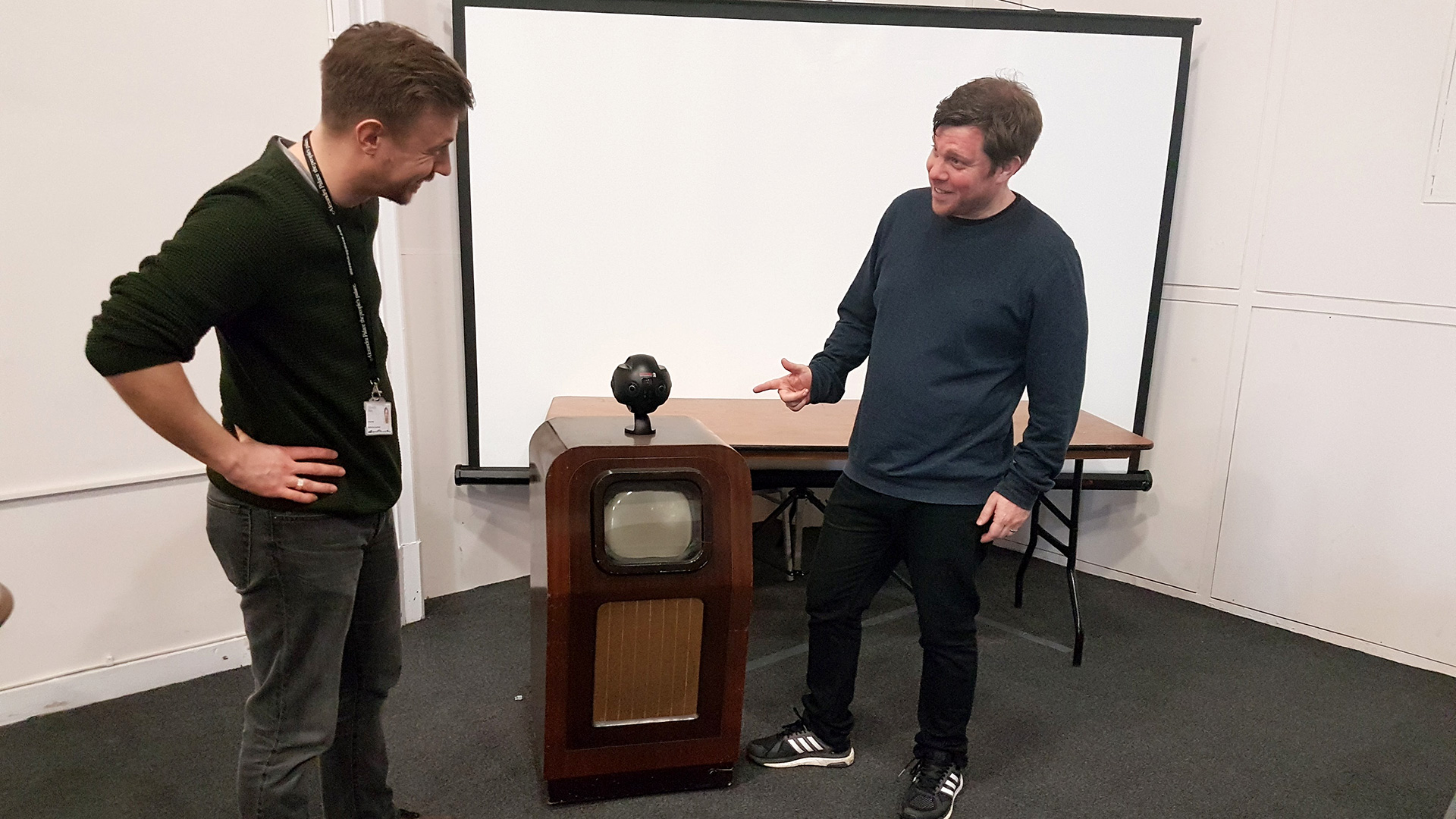 We wanted to add enough interaction to make the viewer feel like they were exploring the studios. This splinters the viewer journey, so we needed to make sure that the narrative flow worked across differing strands. We reduced the number of different scenes overall to give a clearer direction. However, VR opened up a world of possibilities about how to deliver extra content. Some interactions pulled us out of 360 to highlight a particular image of footage, but by not thinking of cuts and edits, as you would in film making, we could position two or three supplementary items within a scene at the same time, increasing the volume of storytelling we could do in one space.

Ultimately the BBC studios at Alexandra Palace offer more stories than we could possibly fit into one app. By experimenting with the VR format and exploring which narratives work in the spaces, we hope to get a better sense of how we use physical spaces, and how we work with VR as a new medium.

More on Virtual Reality and 360° Video: