The Object Based Media community has been running for over a year, and I wanted to give a little insight into how diverse the community and their projects are. Joscha has been involved in media technology for a long while and instantly saw the potential of object based media. He wrote a summary of his project to integrate OBM into his work, which received support from BBC R&D for its bold ambition and openness.

Tempelhof Airfield is a wide, rough piece of land right in the centre of Berlin, which has become a laboratory for experiments around new living models, utopias and perhaps the global city of tomorrow. The 300 hectares of land have experienced the patriotism of the Prussian Army, the national socialist propaganda marches of the Nazis and forced labour. During the Berlin Airlift, Tempelhof Airport was suddenly the centre of Cold War, when the Western Allies flew over 200,000 flights in one year to provide West Berliners with fuel and food throughout the Berlin Blockade.

Following a long period of regular air traffic, the expansion of the city eventually lead to a shutdown of the airport. In 2014, thousands of Berliners have successfully voted to keep the field as is, forbid building any new real estate structures and permanently open the space to the public.

The former area of forced labour is now a temporary home for refugees, the runways are owned by kite surfers, cyclists and skaters, the grass fields are used for barbecues, picnics and urban gardening. What happens with and on the field is decided by the “Field Forum”, a grassroots democracy structure consisting of the various communities engaged on the field, as well as a representative of the Berlin senate.

With the Field Trip project, we aim to tell the diverse and compelling stories of this unique piece of land in a non-linear web documentary format. Based on the stories of dozens of protagonists with very different and individual connections to the field, we aim to highlight the great variety of beliefs in the realm of welcoming culture and fascism or capitalist real estate and sharing economy, along the lines of the basic question: “how open is our society today”? The interactive documentary is expected to go online in early 2019.

In a similar fashion as the web works with hypertext links, Field Trip works with hypervideo links, which allow the user to interactively “browse” through a web of interweaved filmic storylines. At selected points in the narrative, the user is provided with a choice to either continue with the story of the current protagonist or explore a different storyline. These filmic hyperlinks between different narrative sequences form a navigable network of micro-stories, which enables you to experience a different story every time you visit Field Trip.

Inspired by the principles of openness which can be experienced all over Tempelhof, Field Trip will be the first web documentary that entirely relies on both open source technology and wherever possible open licensing for the produced contents. The idea is to create a permanently open and remixable project, which is fully based on open web technologies. So all means of interaction, all visualisations, transitions, effects and everything else beyond the raw footage is put together by creating small, re-usable code snippets. Instead of conventional post-production software, we use HTML, Javascript and CSS (wherever technologically possible).

We will create Field Trip using the “FrameTrail” Open Hypervideo Environment. This allows us to edit and interlink all project components directly in the browser. FrameTrail is open source software and is built exclusively with open web technologies and standards (see also: https://frametrail.org/#principles). 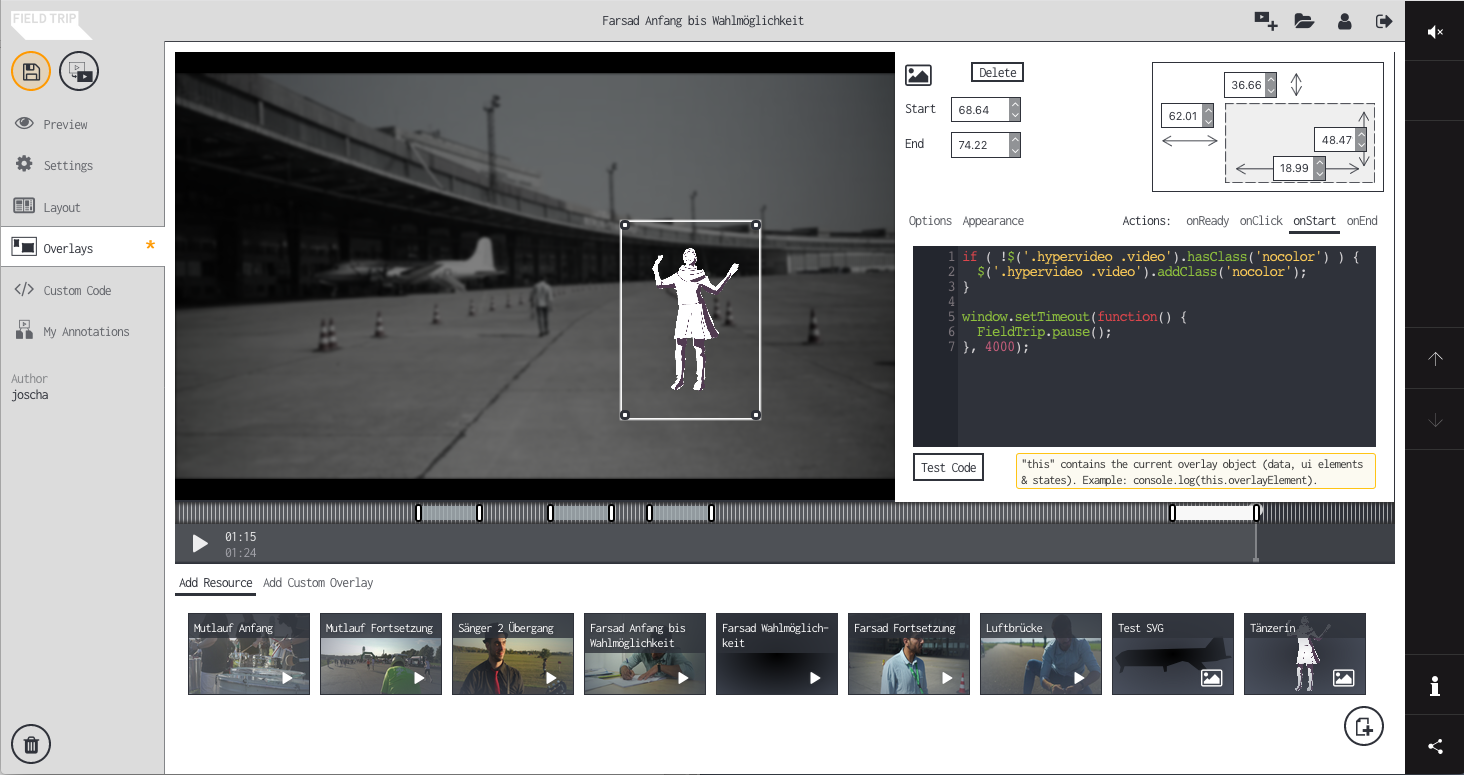 The BBC R&D efforts towards “Object-based Media” naturally fit very well with the goal of Field Trip to create an “Open Source Documentary”. The idea to create small, stand-alone assets, which can be re-composed live - based on different circumstances or environments - is a key component of the project.

The FrameTrail software we are using already allows the creation of web-based video formats, which avoid “burning” things like text overlays into single frames and instead use open web technology. The clear advantage is not just the fact that we can dynamically replace or hide any contents based on information like screen size, current device or user preferences (or storyline affordances). We can also use the single components the way we are used to do it with literally everything else on the web (apart from video): mark, copy and paste text, click hyperlinks and save images. All of this is only possible because we avoid irreversibly rendering everything into one single video file.

But what about the raw video contents themselves, you might ask?

In order to manage cuts, transitions and effects, we plan to integrate the VideoContext library by BBC R&D into FrameTrail. VideoContext has been developed by Matthew Shotton and allows us to compose and render video clips on the client side (directly in the browser). We recently applied for additional funding via the German “Prototypefund” in order to implement this key functionality and are very much looking forward to a positive decision. Opening up the video production process itself (in addition to already open montaged and interactive parts) would take the project idea to a new level and allow Field Trip to be “truly open source”.

Through an open code snippet repository, we will make the technological components of the project available in the form of re-usable bits of code. This could be a small animation, a complex effect, or even just a button. The idea is to maintain an accessible list of stand-alone components, which can be re-used in other projects (detached from the actual contents). To make this as easy as possible, the repository will provide both a searchable website, as well as an open API to retrieve and contribute snippets. Through the same API, the code snippet repository will be integrated into FrameTrail, allowing users to simply drag and drop existing components into a video, as well as share their new creations with everyone else.

Beyond all these rather technological aspects we aim to create a “Living Documentary” format, in which the “use, study, remix and share” philosophy of open source software is projected onto film-based creative works. Field Trip shall be a carefully crafted individual storyworld about a specific place as well as a generic blueprint for this kind of media format. In our every day work on the project, this poses a great variety of interesting questions around the boundaries of disciplines, generic vs. project-specific solutions, the roles of both authors and protagonists in an open license setting and ultimately the practice of filmmaking itself.

Field Trip is funded by the Media Innovation Centre Babelsberg (MIZ-Babelsberg), the Rudolf-Augstein Foundation, the Kurt und Herma Römer Foundation and the Berlin City Council. It is supported by the Foundation Topographie des Terrors, the Nazi Forced Labour Documentation Centre, BBC R&D and the Open Library project of INBAK.

We are still looking for international media partners. Please get in touch for any questions via info@fieldtrip.berlin.