Alongside the series we have created a special interactive Origami tutorial which gives viewers the ability to change camera angle, repeat steps in the lesson and take the exercise at a pace suitable for whoever is following it. In the second of two posts on the experience, BBC R&D's Jasmine Cox and Matt Brooks explain what happened when the created the Make-along - our next step on the way to an object-based future.

Researchers in R&D have been experimenting with programmes that flex and change based on the real-world context of audiences. We're taking this beyond the lab and collaborating with production teams to explore new programme formats.

As part of BBC Arts' Get Creative festival, we worked with BBC Arts to make an interactive experience to support people learning new craft skills. Making something with your hands is hugely satisfying. Through our origami make-along we are giving people confidence to dabble with craft at a pace that suits them.

Over the last few years, BBC R&D’s Future Experiences team have created a number of prototypes exploring object-based media (OBM) – an approach to programme making that enables the creation of responsive, interactive programmes, tailored for each individual audience member.

Our prototypes have been designed to explore new types of audience experiences, such as CAKE, an interactive cooking experience that understands how to cook several dishes simultaneously, and Responsive Radio, a radio documentary that changes length to fit your commute. The value of these prototypes is in exploring and communicating what OBM is capable of – but as each prototype is made to measure, they don’t provide a scalable, repeatable approach to creating new experiences.

After CAKE, we took on the challenge of creating an Object-Based Media Toolkit that would tackle scalability head-on: allowing producers to create their own OBM content using a reusable set of tools and technologies.

Several months into this, Stephen James-Yeoman from BBC Arts got in touch with us, saying he'd seen CAKE and had been so inspired that he wanted us to help out with an interactive paper-folding make-along to tie in with a craft season he was planning.

This pulled us in two directions. We wanted to build the OBM toolkit, creating tools and technology that could be reused across many OBM experiences. Working with real content, tied in to a TV series, was an exciting prospect – but we were concerned that it could divert us away from our goal, and result in us building another bespoke experience. At the same time, creating the OBM toolkit without specific, concrete examples of content was also proving hard – how would we choose what features to focus on without an idea of what experiences we might create?

We decided that having real content available to steer our development would be better than continuing to work on features separately. It gave us a tangible goal with a deadline attached – always a great motivator, allowing us to focus and fast-track the components that were important for an audience and producers. We would of course have to be cautious that we continued to build our tech so it could be reused – this would just require increased discipline.

We also had to make the decision to pause development on our authoring tool, StoryFormer. We had been concentrating on this component of our toolkit for a while – but now we needed a robust playout solution, and it required us to divert our resources. We couldn’t have an audience experience without a player.

Firstly, we consulted with RDF, the production team making a new series of MAKE! Craft Britain for BBC Four. Their excitement about CAKE meant they had loads of ideas about teaching people new craft skills. Their favourite feature was the dynamic pacing - letting the programme run at the pace of the viewer. One conclusion we drew from our previous research was that without the involvement of production teams right at the start of the process, object-based programmes become harder to make. This was challenging as the turn-around was so tight that we weren't able to be there on set. However, we fed in as much as possible so that the video content could be re-mixed afterwards.

Flew back into London for a day to film an origami section for a future tv show;)
I will post an update early next year when it airs.#mindful #origami #mindfoldness #mindfulness #MentalHealth #wellbeing #artshealthwellbeing #crafts pic.twitter.com/Q9IbJNdnTH

We held a making session, and asked people to follow a conventional video of our origami teacher Sam making a frog. We learnt about when people needed Sam to pause for them to catch up, and how individual people wanted alternative cameras angles at different points in time. We also found that people wanted to feel they were having a meditative experience - stepping though the complexity in a calm way, rather than being stressed that they weren't keeping up!

Following this we iterated and tested a number of features: user control of the viewing angle, a flashcard view, background music that flows through the experience, independent volume controls to let you mix, automatic pausing, chapter navigation, and subtitles. 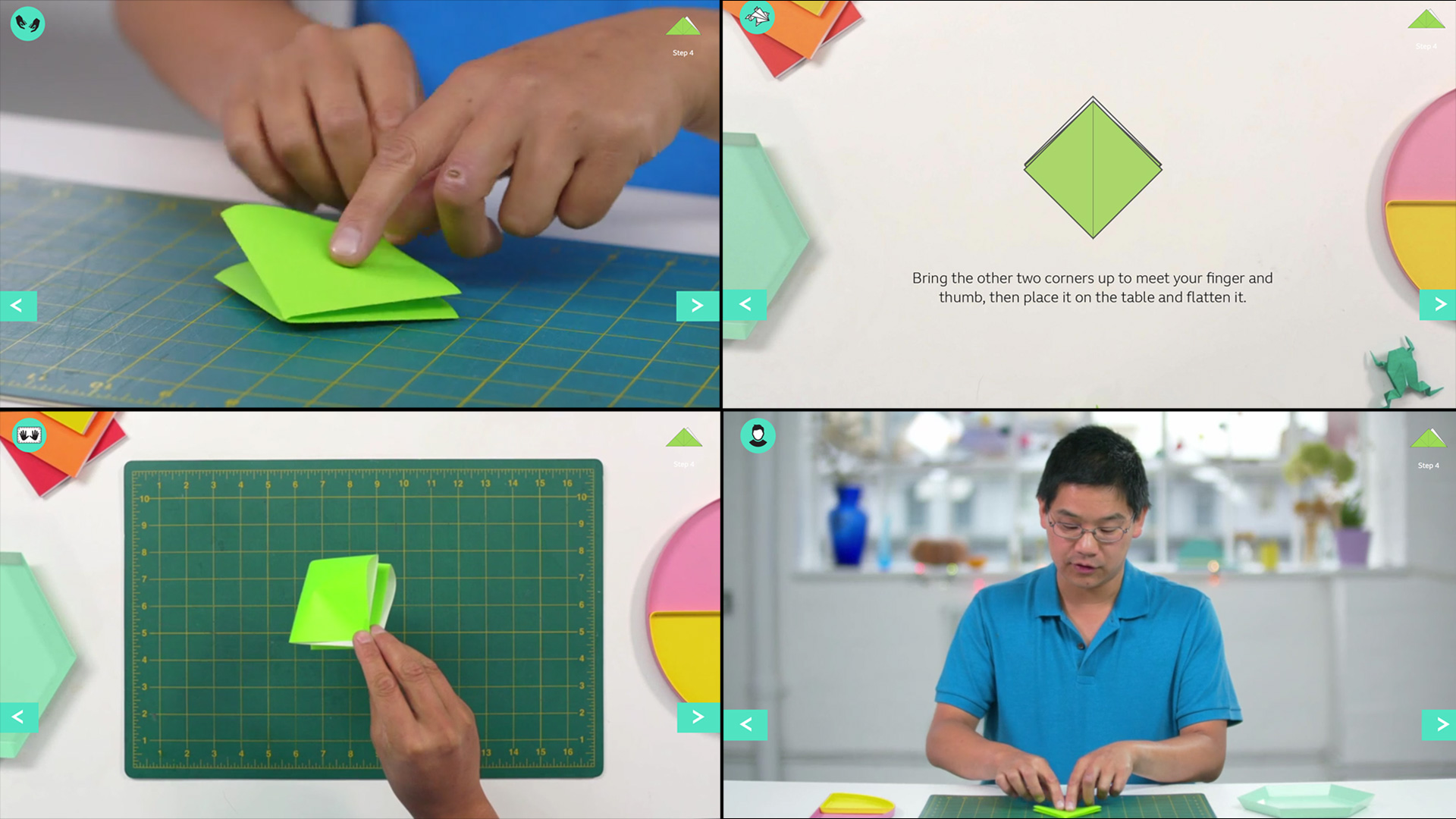 We segmented the footage according to the complexity of each fold in order to create a step-by-step guide, and described the experience using our object based media data model.

We then built our object-based media player, making sure everything we built was reusable for future projects. It’s an ongoing challenge for us to find a perfect workflow for designing & delivering an object-based experience, with a constant tug between bespoke, single project work and reusable, multiproject work. We believe we've struck a good balance, but we’ll still be checking over what we’ve done to fix anything that’s a bit too ’origami frog shaped’. As ever, when you’re up against a deadline, you occasionally need to make a compromise.

Towards the end of the project we had enough time to tackle desktop and multiple tablet vendor versions. We’re really pleased that we ensured that as many people as possible could use the make-along, providing an equivalent experience on a wide-range of browsers and devices from laptops, to iPads, to Kindles. We’ve also packed the player with analytics so that we can understand how people use it on BBC Taster.

We've learnt tons about engaging with production teams, from sharing and translating ideas to aligning with production timelines. One of the most interesting things we've found is how open the teams we've worked with have been, from capturing metadata about their processes – something which can assist us in our research - to extoling the benefits of object-based media to colleagues and producers.

The best thing is being able to share the work with lots of people through Taster, where we'll get honest feedback about whether audiences find having more control valuable.

Also we'll be ramping-up our efforts on our production tools and collaborating on more experiences that use an object-based philosophy on top of an OBM data model.

Read the first post in this series which explains how we made the Make-along.