Almost exactly a year after launching our first UHD HDR trial for BBC iPlayer, we are excited to be launching a second UHD trial comprising all seven episodes of Blue Planet II in UHD HDR on Sunday 10th December. All that’s necessary to view the series on BBC iPlayer is a compatible UHD TV and a suitable broadband connection.

This time last year we were planning to run the BBC’s first UHD HDR trial, giving us our first chance to test some of the technologies we feel are central to the future of high resolution TV.  These include Hybrid-Log Gamma, a version of HDR we invented with NHK to address the needs of broadcasters, and DVB-DASH (PDF), an open-standard for Internet streaming.

Our first task was to test how feasible it would be to get a full programme onto BBC iPlayer and into people’s homes. We identified some issues with DVB-DASH implementations that would have meant few people would have been able to watch the programme on their devices. So instead we decided to make a short four minute clip available to show the potential of the technology to audiences.

Crucially, it also allowed the HDR and Adaptive Bitrate Streaming teams at BBC R&D, along with the BBC iPlayer team, to work closely with device manufacturers to solve the interoperability issues our testing had identified.

The audience feedback from last year’s trial was fantastic, and exceeded our expectations. Even with only those four minutes of content, we were delighted to learn that there is a real audience appetite for better quality pictures, and more of them. 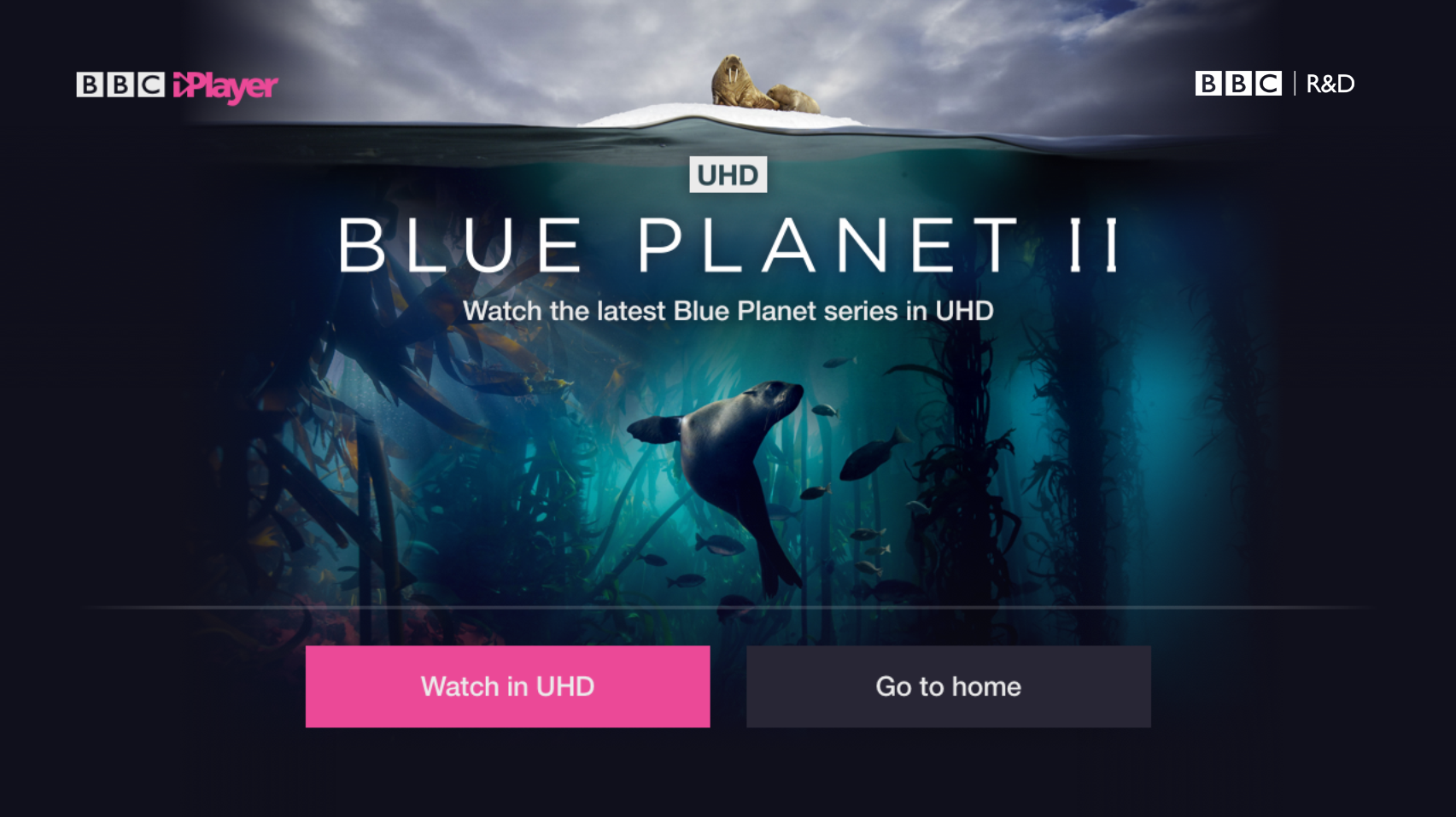 However, the big success from the trial was that it also signalled to TV manufactures that we are committed to the DVB-DASH and Hybrid Log-Gamma (HLG) HDR technologies that underpin BBC iPlayer’s UHD streaming. Thanks to our initial trial, the hard work of our colleagues developing Freeview Play and iPlayer, and our support of industry “plugfests”, from having just a handful of devices compatible with our vision for UHD a year ago, there are now around 400 devices from all major TV manufacturers.

It was, unsurprisingly, a stunning watch, with breathtaking colors and clarity.

As the BBC iPlayer bitstreams use the HLG HDR format viewers do not necessarily need an HDR TV to benefit from the higher UHD resolution and wider colour gamut of the UHD iPlayer bitstreams. Not only is HLG capable of delivering fantastic pictures to HDR screens, but the same HLG signal is also able to deliver high quality “compatible” pictures to standard dynamic range (SDR) UHDTVs, that support the BT.2020 wide colour gamut.

The backwards compatible nature of the HLG signal with SDR UHD TVs increases the size of the audience that’s able to benefit from UHD HDR production. But that’s not the only reason we worked with NHK to develop the HLG HDR system for television, as we all believe it is better suited to TV production workflows and home viewing environments than other systems. More details can be found on our High Dynamic Range project page. 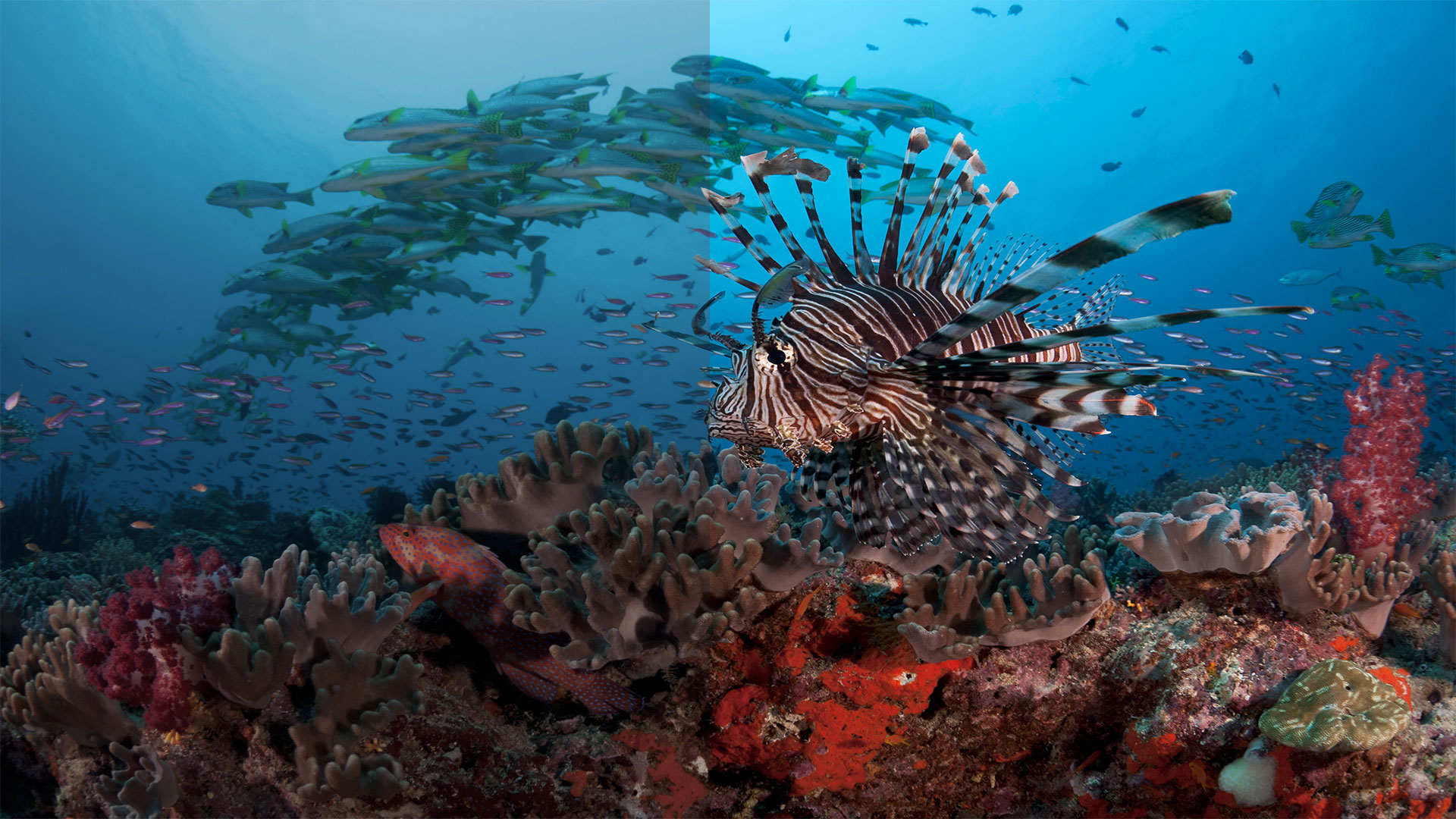 A simulated illustration of the kind of difference between Standard Dynamic Range and High Dynamic Range pictures on Ultra HD TVs.

In addition to supporting wide colour gamut, home devices also need to support the DVB-DASH streaming protocol in order to access the UHD iPlayer trial. Adopting the DASH open streaming standard will, in due course, allow us to target the widest possible range of devices. DASH is already part of the Freeview Play and DTG D-Book specifications, and support for DASH is increasing in non-TV devices too.

Just as they did for high definition, with support from BBC Worldwide, the BBC’s Natural History Unit has pioneered UHD HDR production at the BBC. And if HD production is anything to go by, we should expect to see other programme departments start to experiment with HDR as well.

Although not as complex as delivering a linear broadcast channel, getting UHD HDR content onto BBC iPlayer still presents significant challenges. The workflow used for last year’s Planet Earth II trial was entirely within R&D infrastructure. Our goal with these trials is always to leave the BBC with a better operational capability for the next trial.

We began planning this year’s Blue Planet II UHD HDR trial over the summer, but it was only the first week of November when all seven episodes were finally delivered on an encrypted hard disk drive to BBC R&D in UHD HDR. The UHD version of the series was post-produced in HLG HDR, so we did not need to convert between HDR formats to get it onto BBC iPlayer. However, we still needed to HEVC encode seven one hour UHD programmes - with each programme taking about a day to encode. This is because we need to create up to 11 different versions at different image resolutions, meaning we can target different bandwidth internet connections. Each version is known as a “representation”. We also include stereo audio encoded as AAC-LC at 128 kbit/s. The complete list of encoded representations that we have been using for our UHD HDR testing is shown in the table below. The lowest resolutions are not necessarily made available to all devices. 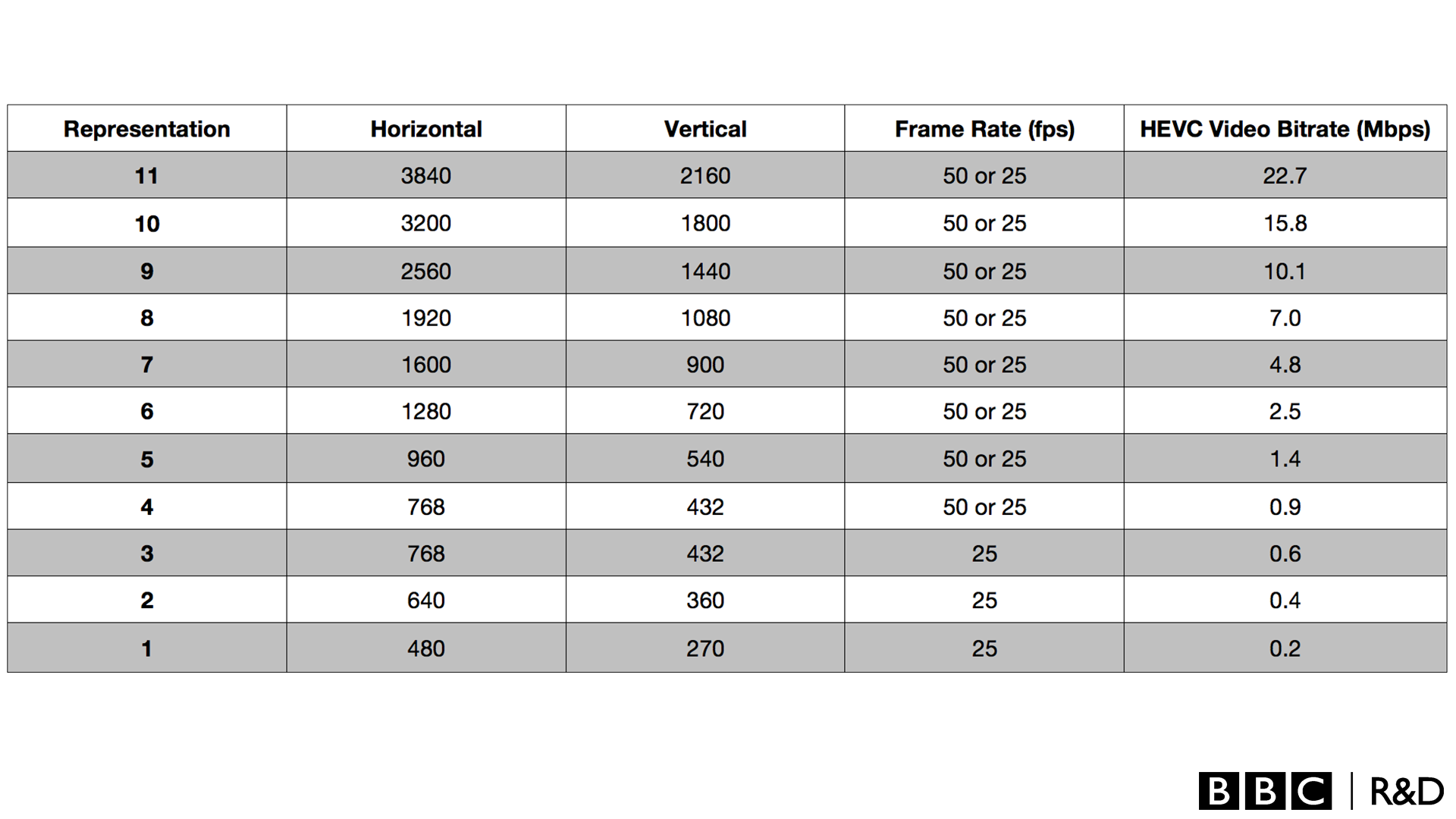 Blue Planet II was produced at 25 frames/second, so only 25 fps representations were produced.

We use HEVC (Main 10 Profile, Level 5.1) compression as it supports the 10-bit data path required for the HDR television signal. It is also more efficient than the older 8-bit AVC/H.264 compression used by the majority of the industry for HD streaming, including our existing BBC iPlayer services. The move to HEVC allows us to reduce the bitrate for a given resolution. So, thanks to the DVB-DASH adaptive bitrate streaming, the resolution delivered to viewers on limited bandwidth connections will also improve. The highest HD quality we currently deliver on iPlayer is 1280x720 at 50 fps (720p/50) at around 5 Mbit/s. By using HEVC, we can increase the resolution to 1600x900, and add both wide colour gamut and HDR for the same bitrate. So even if you have broadband below 20 Mbit/s your UHD TV should still be able to get better resolution, wide colour gamut and HLG high dynamic range.

Finally, after HEVC and AAC-LC encoding all representations of the programmes, they were packaged as DVB-DASH “segments” using R&D developed software, and handed over to our colleagues in BBC Media Services for hosting and linking into the BBC iPlayer TV App.

All HLG capable devices we have tested will identify the HLG signalling within the HEVC bitstream and automatically switch to an appropriate HDR mode, although some devices will allow a manual over-ride via the menu settings. Some HLG capable devices may also show a temporary graphic to indicate that they have switched mode. Alternatively, accessing the TV’s picture settings menu may also confirm that the TV has switched to the HDR mode. Most HLG capable devices provide different HDR picture settings to suit personal preference, but we recommend selecting “HDR Cinema” or “HDR Movie” mode where there is an option, as that usually delivers a picture that is as close as possible to that intended by the programme director.

Over the coming months we’ll be working closely with our colleagues in BBC Media Services to add a UHD HDR encoding capability to their existing iPlayer encoding platform, allowing UHD content to be processed without the need to use R&D’s specialist encoding and packaging tools. This will be a significant legacy of the trial, and again improves our operational capability for the next one.

Looking ahead, we are particularly interested in developing live capabilities both in our workflow and home devices, recognising that bitrates to the home will initially be 50% higher than we are able to use here. But this will fall as HEVC encoding capability improves with increased computational resources and algorithmic development. We also hope to be able to support surround sound in future trials, but that may require some further development work with manufacturers, and more testing to ensure a good audience experience.

But for the time being, we are immensely proud to have played a key part in delivering the spectacular Blue Planet II series to BBC audiences, in the highest possible picture quality.

Evening Standard - 4K, Blue Planet, and the future of streaming