The Nearly Live Production project has now been active for 2 years, first focussing on conceptual prototypes at the 2015 Edinburgh Festivals, returning in 2016 working with the IP Studio project team to develop IP broadcasting capability to support this new style of low-cost production. As we enter 2017, this type of tool is ready to leave the lab, and we’re working with software development agency Isotoma to combine our proof-of-concept IP broadcasting system with their robust software engineering knowledge to produce a browser-based vision mixing interface to support low-cost production run by a single operator.

Doug Winter has been leading the team based in our North Lab at MediaCityUK and has been blogging his experiences from his perspective of working with R&D and giving an external perspective on the new world of IP broadcasting.

This is the first in a series of posts about some work we are doing with BBC Research & Development.

The BBC now has, in the lab, the capability to deliver live television using high-end commodity equipment direct to broadcast, over standard IP networks. What we’ve been tasked with is building one of the key front-end applications – the video mixer. This will enable someone to mix an entire live television programme, at high quality, from within a standard web-browser on a normal laptop.

In this series of posts we’ll be talking in great depth about the design decisions, implementation technologies and opportunities presented by these platforms.

What is video mixing?
Video editing used to be a specialist skill requiring very expensive, specialist equipment. Like most things this has changed because of commodity, high-powered computers and now anyone can edit video using modestly priced equipment and software such as the industry standard Adobe Premiere. This has fed the development of services such as YouTube where 300 hours of video are uploaded every minute.

Video Mixing is the activity of getting the various different videos and stills in your source material and mixing them together to produce a single, linear output. It can involve showing single sources, cutting and fading between them, compositing them together, showing still images and graphics and running effects over them. Sound can be similarly manipulated. Anyone who has used Premiere, even to edit their family videos, will have some idea of the options involved.

Live television is a very different problem
First you need to produce high-fidelity output in real time. If you’ve ever used something like Premiere you’ll know that when you finally render your output it can take quite a long time – it can easily spend an hour rendering 20 minutes of output. That would be no good if you were broadcasting live! This means the technology used is very different – you can’t just use commodity hardware, you need specialist equipment that can work with these streams in realtime.

Second the capacity for screw up is immensely higher. Any mistakes in a live broadcast are immediately apparent, and potentially tricky to correct. It is a high-stress environment, even for experienced operators.

Finally, the range of things you might choose to do is much more limited, because you can spend little time setting it up. This means live television tends to use a far smaller ‘palette’ of mixing operations.

Even then, a live broadcast might require half a dozen people even for a modest production. You need someone to set up the cameras and control them, a sound engineer to get the sound right, someone to mix the audio, a vision mixer, a VT Operator (to run any pre-recorded videos you insert – perhaps the titles and credits) and someone to set up the still image overlays (for example, names and logos).

If that sounds bad, imagine a live broadcast away from the studio – the Outside Broadcast. All the people and equipment needs to be on site, hence the legendary “OB Van”. 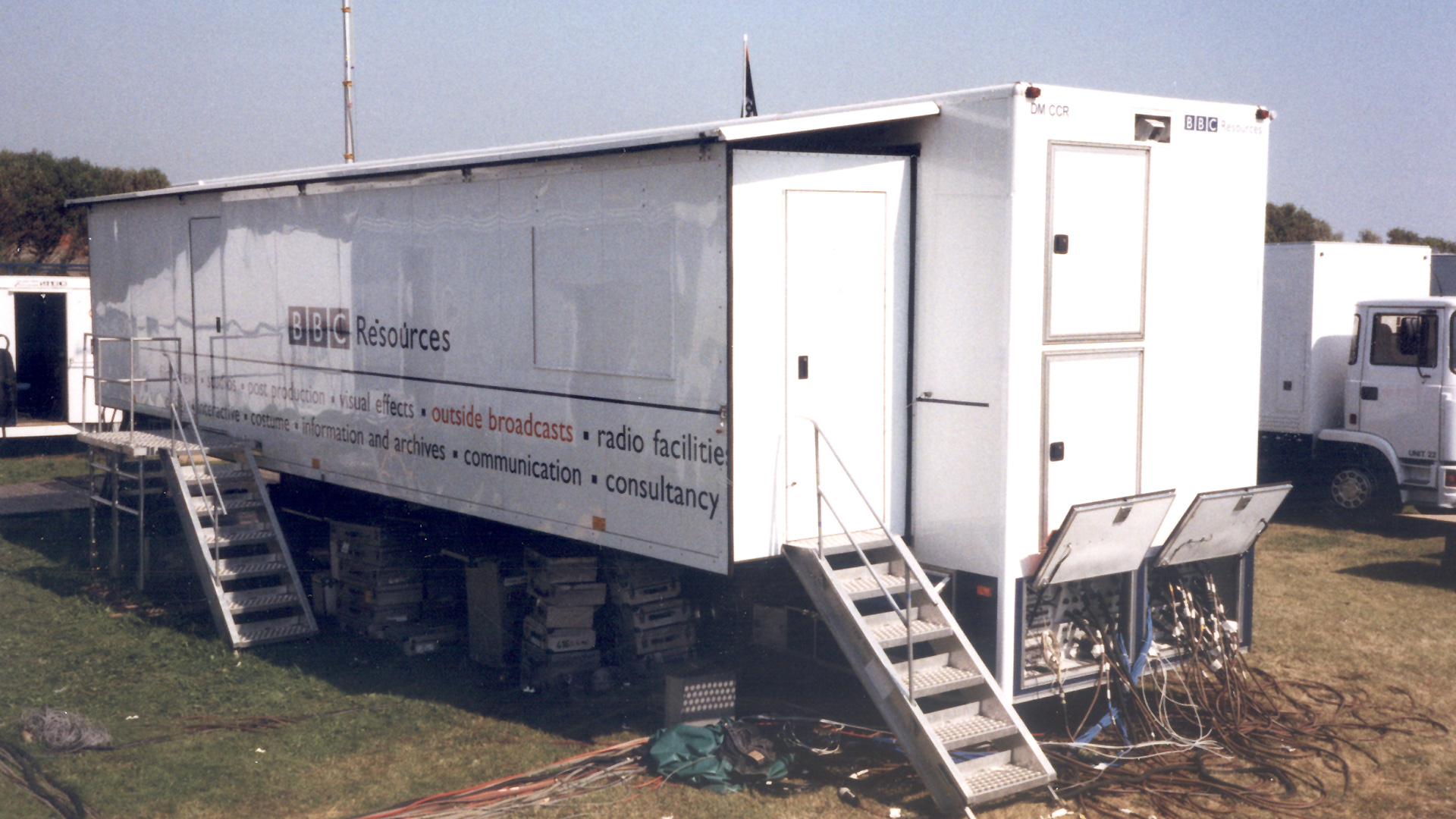 Inside one of those vans is the equipment and people needed to run a live broadcast for TV. They’d normally transmit the final output directly to air by satellite – which is why you generally see a van with a massive dish on it nearby. This equipment runs into millions and millions of pounds and can’t be deployed on a whim. When you only have a few channels of course you don’t need many vans…

The Internet Steamroller
The Internet is changing all of this. Services like YouTube Live and Facebook Live mean that anyone with a phone and decent coverage can run their own outside broadcast. Where once you needed a TV network and millions of pounds of equipment now anyone can do it. Quality is poor and there are few options for mixing, but it is an amazingly powerful tool for citizen journalism and live reporting.

Also, the constraints of “channels” are going. Where once there was no point owning more OB Vans than you have channels, now you could run dozens of live feeds simultaneously over the Internet. As the phone becomes the first screen and the TV in the corner turns into just another display many of the constraints that we have taken for granted look more and more anachronistic.

These new technologies provide an opportunity, but also some significant challenges. The major one is standards – there is a large ecosystem of manufacturers and suppliers whose equipment needs to interoperate. The standards used, such as SDI (Serial Digital Interface) have been around for decades and are widely supported. Moving to an Internet-based standard needs cooperation across the industry.

BBC R&D has been actively working towards this with their IP Studio project, and the standards they are developing with industry for Networked Media.

In the next blog post I’ll describe some of the technologies involved, and how we’re approaching the project.