BBC iPlayer will stream four stunning minutes of Planet Earth II footage in the highest quality the BBC has ever broadcast. The experimental footage will be available in Ultra HD and Hybrid Log-Gamma (HLG) on compatible connected TVs and set-top boxes from today until early next year.

Filming Planet Earth II provided the perfect opportunity to capture the BBC’s world-class documentary making in unprecedented quality. The BBC iPlayer test footage follows a jaguar emerging from the shadows to stalk prey and the mesmerising effects of rain dropping on tiny animals and their habitats, including a range of greens and a frog in a shade of red never before seen on a TV.

The experiment is an early but important step toward streaming high-quality Ultra HD programmes on BBC iPlayer in the future. Central to the trial is the inclusion of HLG, which the BBC sees as an integral part of future Ultra HD programming. Where Ultra HD improves image quality by increasing the number of pixels in a TV set, HLG takes this one step further by providing better quality pixels.

"Yes, it is pretty jaw-dropping."

As a form of High Dynamic Range, HLG works by enabling images to be shown in extremely high contrast. This provides greater sharpness, extended detail in the shadows and dark areas of the picture, a wider range of colours, and more natural and brighter highlights and mirror-like reflections.

The public Ultra HD and HLG test on BBC iPlayer allows the corporation to better understand how the technology affects existing infrastructure and workflows. It also allows the team to identify the various obstacles and challenges to streaming full length programmes. 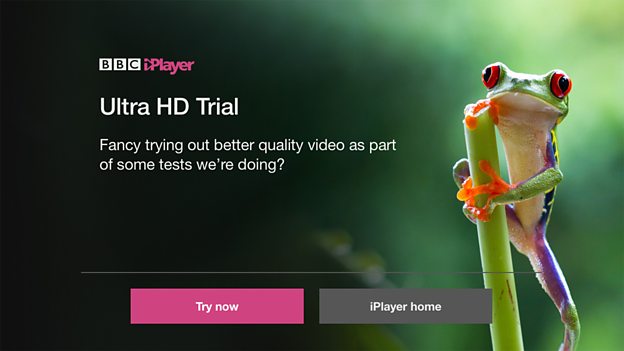 Phil Layton, Head of Broadcast & Connected Systems, BBC Research & Development, says: “Increasing the dynamic range of TV images makes a huge difference to how real the images appear to viewers – it’s closer to looking through a window than watching a standard TV set. Crucially, HLG works with existing TV technology and workflows making it ideal for broadcasters, and audiences, all over the world.”

Dan Taylor-Watt, Head of BBC iPlayer, says: “The extra quality HLG brings to Ultra HD needs to be seen to be believed. It’s still early days for the technology but this experiment puts us in the best possible position once audience demand is there. This year we’ve brought live events like the Euros and Olympics to iPlayer, introduced new personalised features and now we’re giving people a glimpse of what the future may hold.”

"Motherboard can confirm the experience was mind-blowing"

HLG was developed by BBC R&D and Japanese broadcaster NHK to address the complex needs of TV broadcasters. It’s also based on open standards to ensure all audiences can enjoy the best possible Ultra HD experience in the future. HLG was recently included in the International Telecommunication Union’s (ITU) HDR-TV standard.

The BBC is using an experimental stream in Ultra HD and HLG, where the content is graded in HLG and is being streamed as an HLG signal. On supported devices you will be able to watch four stunning minutes of footage from Planet Earth II in Ultra HD and, in time, HLG. One of the aims of the trial is to work with TV and set-top box manufacturers to enable HLG support and we will update this list as they become available - the list has recently been updated to include details of how to view the trial on Virgin and Sky Q boxes.

Recombu - What is BBC HLG and how can I watch it?