With a transition to IP networked production infrastructure under way within the TV production and broadcast industry, new challenges have presented themselves which simply weren't a consideration when using bespoke physical interconnects. We've been trying out approaches to solve these problems in a time-efficient way through practical collaboration with industry.

For a number of years the TV production and broadcast industry has had a desire to shift away from the broadcast-specific physical layer interfaces of SDI, AES3 and similar. The aim is to take advantage of the potential efficiency and cost savings offered by mass-market commodity IT infrastructure, whilst exposing new creative opportunities afforded by the flexibility of Internet Protocol (IP) network interconnects. Whilst a number of standards-based IP media devices now exist, interoperability between them can be limited to the interchange of video and audio, with no universal approach to their control and other core functions. As a result of this, the configuration of a large multi-vendor media network is a distinctly manual process.
Standards bodies are working to solve this, but with an industry itching to deploy this technology today, the standardisation process can be slow. In an effort to inform and accelerate this process, the Advanced Media Workflow Association (AMWA) is promoting a practical approach to proving technologies through its Networked Media Incubator project.
The Incubator kicked off in September, with BBC R&D contributing a number of foundational specifications from the IP Studio project in the following areas:
These topics cover areas which are critical to the industry's adoption of IP technologies for existing workflows, but additionally aim to make the most of the new creative opportunities afforded by this transition. By building in strong identity and timing for media at the foundations of the approach, we enable a raft of new content experiences which broadcasters may wish to explore in the future.
Following a period of familiarisation and time for participants to develop prototype implementations, BBC R&D hosted the first Incubator workshop in Centre House earlier this month. 11 organisations took part in the event, with reference implementations provided by the IP Studio project. Participants brought a range of devices to the event, primarily in the 'edge device' class (SDI to IP and vice versa for example), but also in the fields of connection management, vision mixing and network switching. The aim for all participants was to demonstrate an implementation of the provided specifications, showing compatibility with the reference senders, receivers and discovery infrastructure provided. 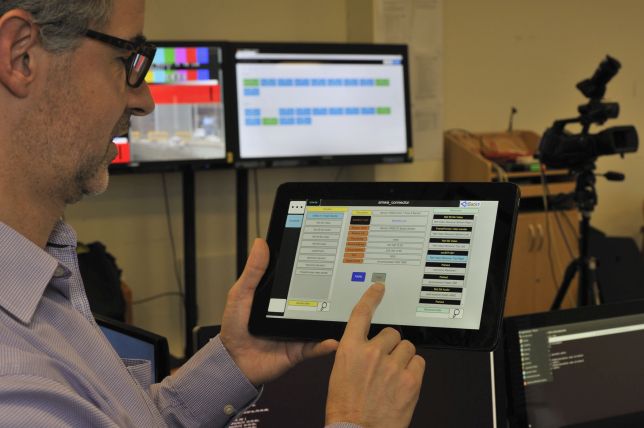 A device-agnostic control interface interacting with the shared APIs to choose video flows displayed on a multiviewer
The level of collaboration, and as a result the general atmosphere at the workshop was a credit to all involved. Whilst companies involved are in many cases competitors, there was a distinct feeling of coming together to reach a common goal. Where issues were encountered, all present were happy to share their experience to ensure everyone got the most they could out of the event.
Progress made within the workshop was impressive, with some manufacturers arriving at the start of the week with implementations that dropped in and 'just worked'. By the end of the week, all participants had successfully demonstrated their interoperability with the reference discovery system, and their ability to have multicast video and/or audio flows routed between devices using the connection management APIs. These results are incredibly promising, and provide the industry with a proven set of specifications to consider for adoption as part of future standards.
The specifications implemented as part of this process are due for public release shortly, and AMWA will be offering a further opportunity for more organisations to participate in a workshop in due course. For further information about this or anything else in this blog post please contact the IP Studio team.