The aim of this project is to help people - initially younger audiences from 16-24 years old - to deepen their understanding of a news story or event and allow them to create their own exploratory journeys.

A key factor for our work is that we want to create use cases for people with limited time available to explore news stories on the mobile while they are out and about. The popularity of services like Snapchat is an example of changes in users’ behaviour on mobile devices. Users are increasingly consuming news stories in a snackable format. The challenge is to provide the news in a quick, snappy format while also providing the opportunity to deepen their understanding when needed.

This project is part of R&D’s work in object-based media and new ways of telling stories on the internet. Content can be created and delivered using a set of individual media assets with metadata describing their association and then put together in different ways.

We looked at interesting products in this area and found (the now defunct) Circa and AJ+ to be the closest offering to our atomised content model. Circa was writing atomised news stories in a format that enabled quick updates to stories. On the AJ+ mobile app each content type for a story sits within a ‘card’ - cards are then assembled into stacks on the home screen. The strength of the app is the use of mixed media like text, video, photos, info-graphics and polls to explore a story .

In this first iteration of our project, we started by generating several concepts exploring how to show a story in varying levels of details. We picked two ideas that had the most potential and met our criteria.

The concepts were fleshed out, user journeys were tested and tweaked to improve the user experience, and subsequently, the two ideas were developed as fully functional prototypes. One is a card-based iOS app that gives an overview of a news story on a 'spine' of cards made of compelling, full screen photos with a couple of lines of text summarising the event. Users have the opportunity to explore more cards on certain aspects of the story. The other is a video-driven Android app that uses chapterised videos and text captions as the core experience while allowing users to insert additional video chapters into the main timeline where they want to know more. This creates a custom user journey of the news story.

This video shows the two prototypes' main interactions and features.

We explored how to break down news stories into component parts and then describing them with structured data so that we can re-assemble them back together in interesting ways. We looked at ways of leveraging the potential of atomised content to expose the core events of a story while allowing users to 'dig deeper' if they wish. 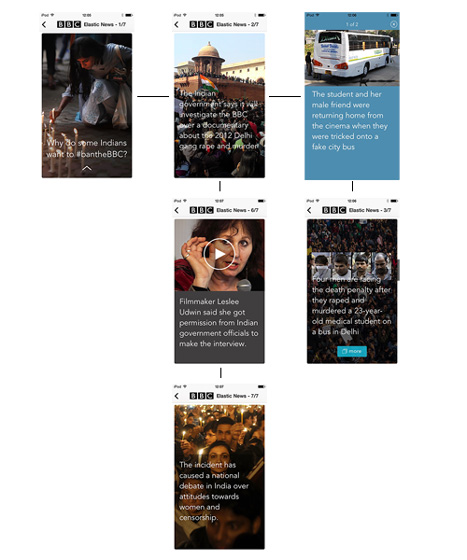 During this phase, we refined our understanding of atoms: news stories broken down into events, events broken down into small, self-contained 'pieces' of information. These mixed media can link to other atoms and other news storylines. 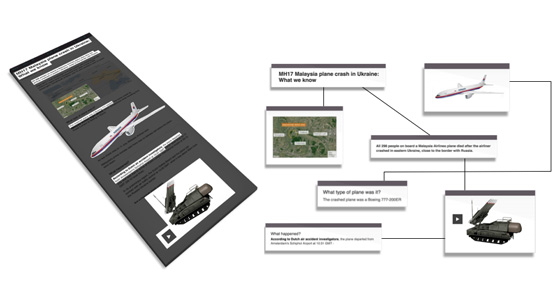 As well as providing summaries and deeper information we feel this approach could lead to news becoming tailored to the user by re-arranging and presenting the atoms depending on personal preferences, context and devices. For instance, if bandwidth drops on the mobile, a video atom describing an event could be replaced by a picture with text captions or an audio version if the user has headphones plugged in. Or if we know someone has already read lots about this storyline we can remove all the “what happened previously” atoms.

We chose to build these prototypes as native apps for optimum performance and user experience. The video prototype needed to be able to seek to various cue points in a seamless manner, while the card based prototype made use of background tasks to preload content upfront for the user.

We worked with Mohamed, a journalist in BBC news, to create a couple of stories in the format required for these prototypes. This first attempt at creating atomised news with a journalist produced some interesting results:

The prototypes were tested with a sample target audience - an even mix of male & female between 16 and 24 years old. We chose to recruit both light - not really into news and only checking sporadically - and heavy - checking the news several times a day and across several media (TV, mobile, website or newspapers) - users to better understand news consumption on mobile devices across a wider audience spectrum. Although we are currently targeting light users, we will want to eventually create a scalable, flexible structure for news stories using atomised content that works for all kinds of users.

Both prototypes tested well and demonstrated their strengths and weaknesses:

Overall, our top-level recommendations from this user testing were:

The next iteration of our project will be taking the best features from both prototypes and recommendations from the user testing. The next prototype will also address data structure challenges as we collaborate with BBC News Labs.