The PC has marched from the desktop into our pockets and become the smartphone: an even more personal computer. Now consumer electronics manufacturers are offering us smart watches: wearable computers with modern features such as touchscreens, cameras, Internet connections and contactless payment systems. The BBC and the rest of the media industry have responded to the smartphone and tablet revolution with apps that make it easy to find content that was already being created for other media. For example, the iPlayer apps offer content (mostly) from BBC TV channels and radio stations, and the BBC News, Sport and Weather apps provide convenient, well-designed ways to access information that users might previously have obtained from BBC websites.

Smart watches present some new opportunities. When we look at the way that they and their apps are being designed, we see a focus on brief interactions and simple functionality—informed perhaps by the likely impact of a century of wristwatch use on users’ expectations, and by the limited screen size and user input capabilities of a wrist-worn device. Some existing media forms could make an easy transition to the new platform: newsflashes, goal alerts and weather forecasts, for example. Others, such as long-form written articles and videos, seem ill-suited. But what opportunities for completely new forms of content do smart watches present to organisations like the BBC?

Researching the possible implications of new technologies for the BBC and its audiences is one of the key purposes of BBC R&D, so we carried out a short piece of work to think about those opportunities, with the hope of inspiring future research into experiences that will inform, educate and entertain future smart watch users in ways that fit naturally with the capabilities and purpose of those devices.  We also wanted to think about how these future forms of content might be designed—how will the watches present them to the user, and how will users interact with them?  How can designers create rich experiences on devices with such small screens and limited user input capabilities?

We developed four concepts, producing “mock up” designs that show possible future experiences that the BBC could offer to smart watch users.  We tried to ensure that the concepts would all be practical with today’s technologies, but we did not create them with specific devices in mind—it’s the user experiences that interest us here rather than the specific products and technologies that will enable them. 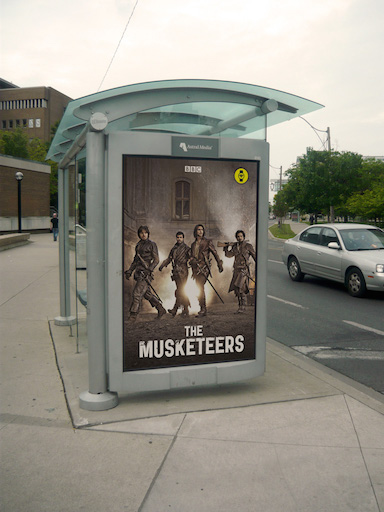 The poster advertising industry has been giving passers-by the opportunity to interact with poster advertisements using mobile phones for a decade now, offering an easy way to access a related app or website, or a direct download of a promotional audio track, video or still image.  We imagine here something slightly different—a simple but engaging interaction between a poster and a passer-by via their smart watch that is richer than a simple media download, but much simpler and more tightly scoped than a typical website.  We imagine in this instance that the poster is located at a bus stop—a location with a natural audience for experiences lasting a minute or so.

The experience starts with a user pausing by the poster and observing the icon indicating that more information is available via their watch.  Proximity to the poster causes a similar icon to be displayed on the screen of the watch — they touch the icon to initiate the experience.

A branding screen appears to reassure the user that they are receiving the experience they expected, and by tapping “more info”, the branding slides up to reveal the experience’s home screen.  This gives them some key information (such as the quickest way to watch the next episode of the programme being advertised), and four interaction areas spaced around the edge of the watch screen to perform other related functions—offering a synopsis of the programme for people who are unfamiliar with it, information about the actors cast in the show, and action links that could bookmark the series to make it easy to find in iPlayer, or schedule a recording of the series on the user’s Digital Video Recorder at home.  We imagine here that the user interacts with the experience by tapping these links, and that the various screens slide across the watch face in response—like a slide being moved under a microscope, the watch screen becomes a window onto a larger two-dimensional space.

A user opts in to receiving alerts from a “Behind the Scenes” app when they are in locations where interesting events have occurred—in this case, events relating to the BBC.  We might imagine that the user has given their permission for the app to look at their iPlayer favourites to find out which programmes they are interested in.  The first screen the user sees confirms the location for which information is available—in this case, Trafalgar Square.  They tap the bottom of the screen to be taken through a short list of interesting events that took place in this location.  In one case (the “Doctor Who” example), an icon is shown indicating that more information is available via the user's smartphone.  Tapping it causes an appropriate response on the user's phone: perhaps launching iPlayer and showing a short documentary, or showing a relevant website in the phone's browser.  When the list of events at the current location has been exhausted, nearby locations for which information is available are shown.  Selecting one causes the watch to offer walking directions to the location in question, extending the experience into a walking tour.

User interaction with this experience is simpler than the previous one: as presented here, a series of screens is shown to the user in sequence, with no mechanism (and little need) to offer the user much in the way of choice.  In practice, it might be better to allow users to move in either direction through the list of events associated with a place, and perhaps collect events at places which they have visited for future reference.

Location-based experiences such as this are not novel, but simple examples like the one described here are particularly suited to smart watch devices, given that they will involve occasional interaction with a location-aware device during longer periods of walking around.

One of the simplest interactions a user can have with media of any form is expressing interest or approval in it—the “Favorite” button on Twitter or the heart on Instagram, for example.  The BBC's Playlister service allows users to build music playlists by expressing interest in individual tracks they hear on BBC radio stations.  In addition, the BBC has recently launched it's own “Love” service to allow users to indicate their appreciation for a wide range of BBC content.  Smart watches could provide a convenient way to perform this kind of function, and we show here an example that focuses on bookmarking radio content.

Initially the watch acts as a remote control for an iPlayer radio app on the user's smartphone. The user can adjust the volume, and pause and resume playback. They can also tag or bookmark a particular track while it is playing.  In these mock-ups we show the playback controls persisting throughout the experience, but equally they could be overlaid by the bookmarking interface.  When the user bookmarks a track, they are shown a confirmation screen.  Users can also browse through their list of bookmarks and use it to change the content delivered to them via their phone.

Fitness apps are common on smart watches, as manufacturers position their devices as companions to a healthy lifestyle.  In 2013, BBC Sport launched their “Get Inspired” project to encourage uptake of sport across the nation.  It inspired us to imagine a BBC smart watch app that takes advantage of the BBC's access to professional athletes to encourage users to become more active.

In this example experience, the user can choose between four different sports.  We imagine that they choose “cycling”; they can then choose from a selection of challenges, each planned in collaboration with a well-known athlete, and pitched at a suitable level for the user based on their prior performance.  After a motivational quote from the athlete, the challenge commences and the user is presented with relevant information about the challenge and their performance while they partake in it.  Afterwards, they can compare their performance to that of the athlete, and share details of the challenge with friends, family or a personal trainer by social media, instant message or email.

Smart watches are far from being a mainstream consumer product at present, and only time will tell whether they gain the widespread adoption that smartphones and tablets have before them.  Both the capabilities of the hardware and the way people use them will doubtless evolve over time, and their future as a platform for BBC content is difficult to predict.  It seems clear to us though that the potential is there for innovative, well-designed experiences, and we look forward with great interest to future developments in this area.