Ian Forrester and Jasmine Cox were part of the space wranglers team for Mozilla Festival this year. Space wranglers are given a large section of Ravensbourne Art College to curate a weekend of workshops and activities on a particular theme. Along with Jon Rogers from Dundee University, they headed-up the 'Open Web of Things' track at the festival and invited workshop proposals on the theme of a physical web. Ian & Jasmine devised a pop-up Ethical Dilemma Café, where visitors were offered free smoothies and popcorn in exchange for accepting a set of terms & conditions; consenting to have their personal data tracked in the café.

Over the last few months the team evaluated 50 publicly submitted talks and workshop proposals, and settled on a core set of 19. The schedule was a mix of practical sessions from hacking with sensors, mindreading, lock-picking, to mimicking animal behaviors using javascript controlled robots, and more discursive sessions from data ethics to science fiction in the Internet of Things.

We also hosted sessions by international speakers, including a team of designers and engineers from Mozilla Japan. Marcella Sabino spoke about saving households in Brazil with the Internet of Things in: 'Green Intelligence', and Avinash Kumar led a session on 'Quacks, Messiahs, & Street Doctors: An Internet of Local Medicine in not-so-digital India'. 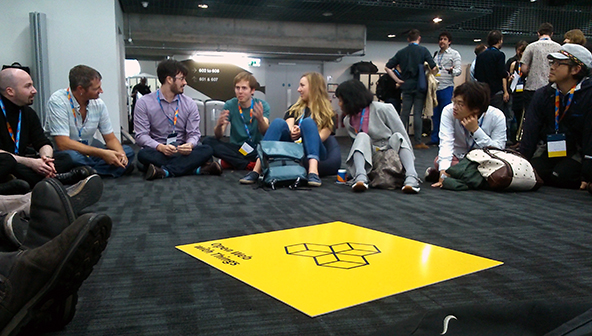 Workshop facilitators discuss the plan for the festival weekend

We also included a new area called the Ethical Dilemma Café, which included a space to show physical work in progress and completed prototypes. Before entering the café, visitors were confronted with a notice, warning them that by crossing an arbitrary boundary they were giving away all of their personal data to the 'café', and potentially malevolent 3rd parties. The language used was deliberately obscure and in direct contradiction to the wholesome premise of the café, un-clearly stating that the management held rights to all information exchanged within the space. For allowing us to liberate personal data, we offered smoothies and popcorn, and decorated the space with a physical wiki suspended from string. As one visitor put it  "Popcorn and Juice with strings?" 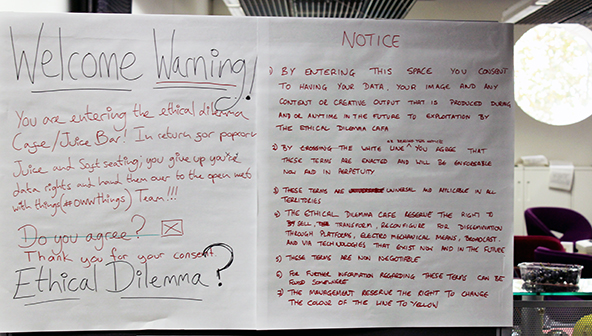 Terms and conditions of entry to the Ethical Dilemma Café

We rigged this café to highlight and make-physical the dilemmas faced online all the time; free services at the price of your personal data. We wanted it to be a bit of fun as well, the temptation of warm popcorn and juicy smoothies was too great for most, and nearly everyone accepted our EULA (End-User Licence Agreement), something we nearly always agree to and dismiss when installing software on our digital devices. The artificial white line (which was actually yellow) was easy to step over and recieve a tasty reward. Once in, personal data was capured using The Walls Have Eyes installation and printed out for posterity on a dot-matrix printer, the reams of continous paper were then hung on strings, you could say we were airing our dirty laundry in view of the public! An audio recording system was also installed, it was created by Matt Shotton and Frank Melchior, it sampled the conversations at coffee tables, and complied a playback broadcast every half-hour. 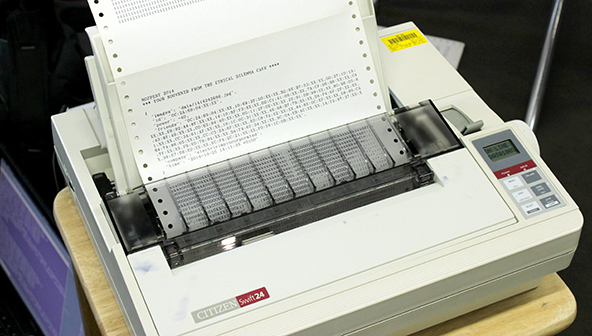 Security is an often over-looked aspect of new connected products and Internet of Things hacks. There is a sense that soon everything we touch will be connected, with an ‘Internet of Things’ blanket that connects all animate and inanimate objects. And it’s no joke to imagine our children living in connected homes, playing with toys that can identify them and read them bedtime stories. We wanted MozFest visitors to reflect that perhaps we’re stumbling into this, without truly considering the ethical and security implications of making everyone and everything connected.

Only a handful of people refused to enter the café. One particular pair of visitors, a father and young son, were split in their decisions to embrace free smoothies. The father was wary of the risks and refrained from crossing the line, however his son immediately placed an order for a smoothie. After a short disussion, with the father explaining the dilemma, his son rejected the smoothie. 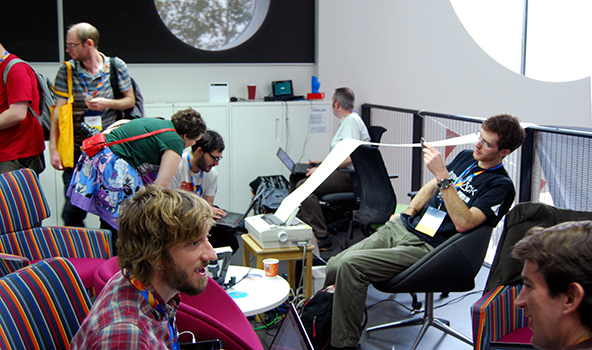 Regular visitors to the café

It wasn't all about tracking and profiling our customers, the café was also a great place to hang-out, alongside the surveillance activities Joel Porter and Daniel Burnett showed Tangible Playlists work from a recent Creative Exchange project. Hattie Foster from Penguin Randon House invited café visitors to settle down with a good book, and listen to an augmented physical copy of Stephen Fry's 'More Fool Me' as part of the YourFry project. Ali Napier from Dundee University's new 'Make Space' had brought along a 3D printer, and RCA student Natasha Trotman exhibited her tangible data interactive installation. 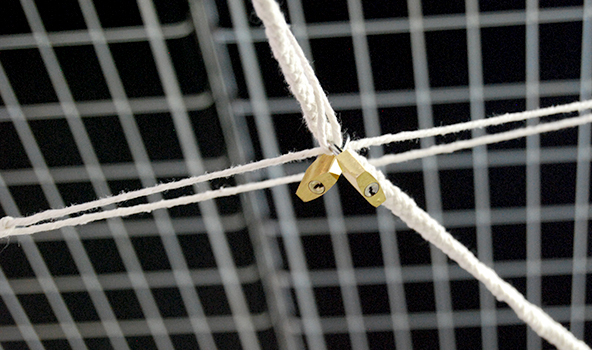 The physical wiki was suspended on strings connected with locks

A physcial web connected the exhibits in the space together, and included padlocks which visitors could try to unlock using brute force, lock-picking skills or finding the right key! This chimed well with one of our facilitated workshops around lock-picking, which was so popular people kept doing it throughout the rest of the festival. We always knew it would be a well-attended workshop but even this surprised us, with people learning and passing on the knowledge to others to try their hand. Even at the closing plenery people were furiously trying to pick locks, until Babak Javadi took the tools away! 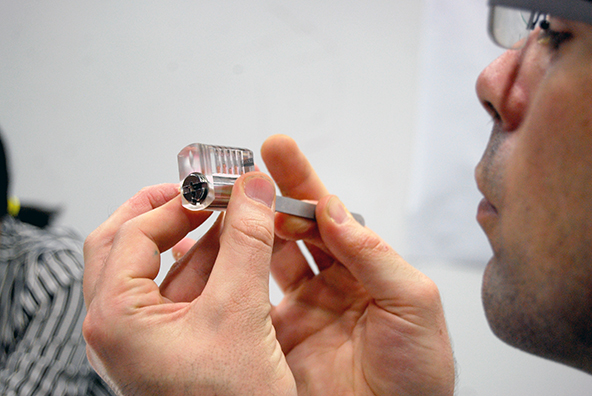 Lock-picking skills were taught at one workshop 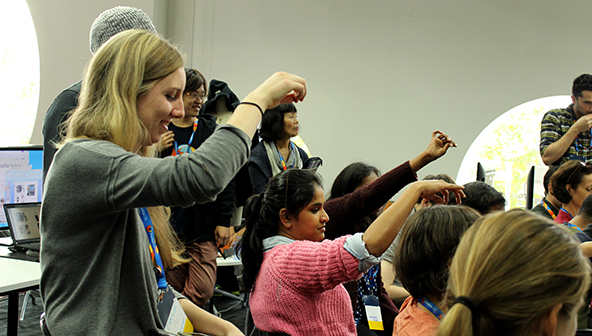 Another popular workshop was Stuart Nolan's mind reading web. A great deal of human communication is subconscious yet the existing web supports only conscious communication. Recent developments in thought identification technologies are opening up new ways of interacting, playing, working, and learning that use our subconscious responses. Stuart's workshop explored what the 'Mindreading Web' would feel like, and playfully explored this question with physical techniques, and pioneering Victorian mindreading craft, teaching how to effectively read another persons mind by sensing small subconscious muscle movements. 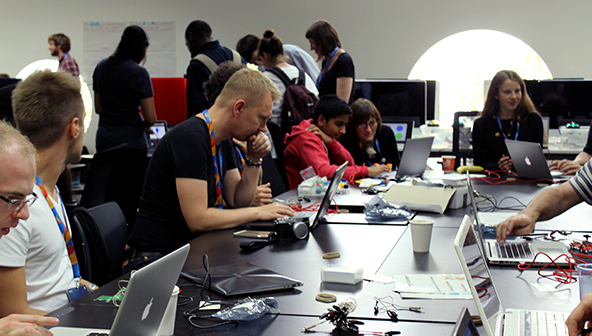 Some of the practical sessions helped MozFest visitors to create their own 'home-made' sensors. The Tech Volunteers from Warwick University transformed cardboard, tin foil and other household materials with Scratch and PicoBoards, to sense and connect physical creations to the web.

We hosted a fantastic team of workshop facilitators and volunteers, who worked tirelessly to elevate an already brilliant festival to an outstanding one, and we more than matched our ambition to promote discussion and consideration for a more transparent open web with tangible things living inside it! 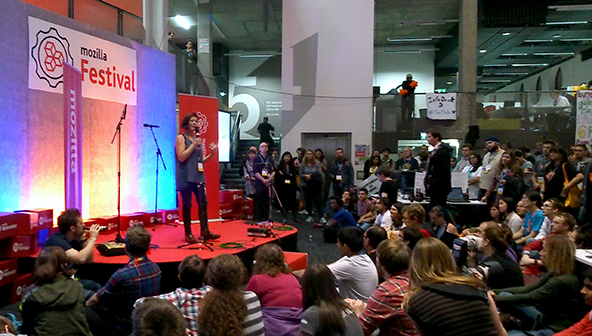