BBC Research & Development recently demonstrated higher frame rate (HFR) technology at its public Commonwealth Games showcase at the Glasgow Science Centre (GSC) . The purpose of this exhibit was to demonstrate the potential benefits to picture quality of watching sport at higher frame rates.

A Bit of History

A lot of aspects of the technology behind a television system have changed over the decades, since the introduction of monochrome 405-line systems in 1936, to the switch-over to digital TV across the UK in 2012. However, one aspect of the TV systems that has ironically remained “static” is the frame rate, where it has remained at 25 frames per second (fps or Hz). Interlacing is used for the majority of our broadcasts, where only the even or odd lines (fields) of a frame are sent, at a rate of 50 fields per second.  This effectively doubles the temporal resolution, but even at the conventional field rate of 50 fields per second, motion blur and judder are very much apparent on video where there is lots of motion, such as with sports content.  With higher frame rates (100fps or higher), motion blur is significantly reduced, producing sharper images, which provides a much more natural and immersive viewing experience. An illustration of the motion blur improvements at higher frame rates is shown below. 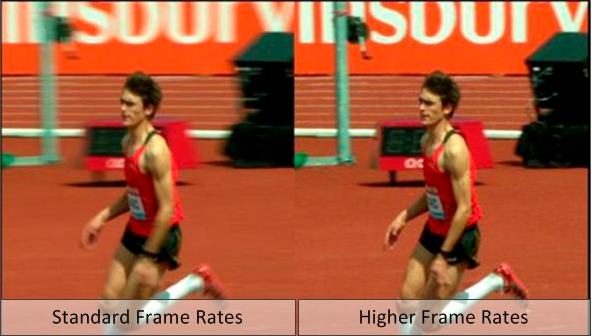 HFR setup at the Commonwealth Games

The demonstration at the GSC was probably the world’s first large scale public demonstration of high frame rate television. Previous demonstrations in our work on HFR so far have been limited to conferences or workshops, where the delegates have been from the broadcast community, such as IBC. This was our first opportunity to find out what average viewers thought of higher frame rate TV.

For the capturing of HFR content, we had our production equipment set up at either the SSE Hydro or Hampden Park in Glasgow. Our HFR camera, the For-A FT-One camera is designed for use in slow-motion (slo-mo) action replays: it is a 4k resolution camera, capable of recording a 10 second shot at 900fps into its internal memory uncompressed. Typically, in a normal sports production, the camera is set to record at 100fps or higher, the captured sequence is then replayed at 25fps, thus producing the slo-mo effect (x4 slow down). Instead of using the captured sequence as a slo-mo clip, we are playing the clip at the full capture speed, thus obtaining high frame rate video. The extraction of the sequence from the camera is rather complicated due to the huge amount of data involved. Uncompressed 4k video at 100fps is about 24Gbits/s, this is about a DVD (9GB) worth of data every 3 seconds. There is no way of extracting this data in real-time from the camera, instead we have to play the sequence out slower, at 50fps, over a quad-link 3Gbit/s SDI interface and capture the material to a PC. A series of high speed SSD drives are required in the PC, which need to be linked together to provide the data bandwidth. 8 drives were linked together to provide 4TB of storage, enough capacity for a full session shoot and enough data bandwidth to capture the material.

Once the clip is captured, it can be processed for playback. Currently, there are not many HFR (>60fps) displays in existence, all of which are only HD resolution (or very slightly higher). At the GSC, we used 2 ceiling mounted Barco F85 projectors. The projectors were set up to run at HD 100fps and 50fps, driven via a PC. The HFR camera was configured to capture clips at 400fps. Even though we cannot show 400fps, the clips were recorded at this high rate to allow experimentation with the material at a later date. For the demo, each clip was processed to create a 100fps and 50fps version from the higher frame rate version, at HD resolution. The down conversion of the clips was done in a way to model the physics in the camera, so the down-converted clips are a true representation of would be achieved if the camera was configured at 100fps or 50fps instead. The processed clips were then transported across the internet to the GSC for demonstration. As this was not a live production, new clips were processed and transmitted to the GSC as they became available. The demo was constantly updated with new clips throughout the showcase, so a good variety of clips were available for demonstration from sports including: rhythmic and artistic gymnastics, athletics, boxing, netball and badminton.

The demo at the GSC was generally well received. A large portion of the public could see the benefits of higher frame rate straight away and were very impressed; others needed some prompting on where to look and eventually could appreciate the difference, while others couldn’t see the differences at all, even with lots of prompting, however, the latter were a much smaller minority, about 5% of the visitors. A question that was asked repeatedly was the difference between the 100Hz, 200Hz or higher TV’s they have at home and this demonstration.

To clarify, the signal that your TV receives from your TV aerial, cable or satellite is always 25fps (or 50 fields per second). If your TV claims to be 100Hz or higher, it is doing motion interpolation on the image: the TV is taking the 25fps and intelligently guessing what’s happening in the scene to create new frames to be inserted between the existing frames to produce the 100fps or higher video.

Although motion interpolation can have some benefit on picture quality and motion portrayal, it is not a replacement for true higher frame rates, much like standard definition channels up-scaled to HD by the TV are not a replacement for actual HD channels. The algorithms within the televisions can be highly sophisticated, but things can commonly go wrong as shown here: this shot was photographed from a TV that has motion interpolation. 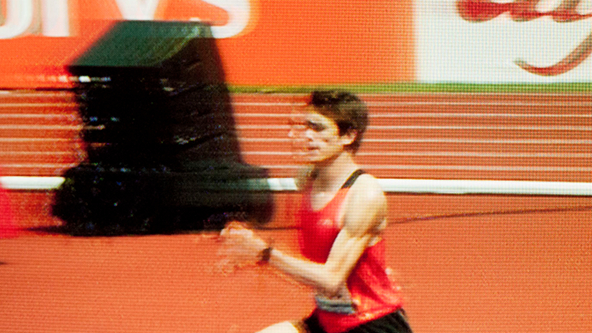 Due to the complex movement in the video, the motion in the image has been badly predicted for the interpolated frames, and lots of image breakup, distortion and ghosting is present in the interpolated frame. These artefacts are common with TVs that interpolate and can be quite distracting for some viewers. Also, the interpolation can only be as good as the input, so if the source content has lots of motion blur, it cannot be removed to produce sharper images, free of motion blur and judder after the processing, regardless of what you have seen on US forensics dramas.

The work on higher frames has been ongoing for a number of years at BBC R&D, but has recently become quite popular. 100fps (and other higher rates) have been submitted to international bodies for agreement, and it looks likely that it will be accepted into the ITU BT.2020 standard. However, higher frame rates are just one aspect of what might go into a new UHDTV service. There are lots of other parameters to consider, and work is ongoing throughout the international community. These include:

Higher Dynamic Range (HDR) – The ability to see both bright and dark parts of a scene at the same time. HDR pictures are more natural and colourful; they provide realism to video that cannot be achieved by simply increasing the resolution only. Lots of work is currently happening in this field, with BBC R&D leading or contributing to this this work internationally with our research partners and standards bodies.
Wider Colour Gamut – The ability to produce colours on the screen that normally cannot be reproduced on conventional screens.
Higher Bit Depth – Moving from 8-bit processing to 10-bits or higher.
Higher Spatial Resolution – This is increasing the number of pixels on the screen. Current HD is 1920x1080 pixels, for UHD-1 the proposal is 3840x2160 pixels. You will find TVs with this higher resolution in the shops today.
Better Audio – More immersive and advanced object based or multi-channel audio systems.

Each aspect needs to be considered carefully to ensure all of our viewers are able to benefit from the improvements of a new broadcast system, and not just those enthusiasts with large TVs or a multi speaker audio setup. It’s too early to say exactly what will be included in future TV standards, but watch this space for more information.

BBC R&D would like to thank Barco for their assistance in this project, without them the demonstration would not have been such a crowd pleaser.