As part of its presence at the Commonwealth Games, BBC Research & Development currently has a number of ultra high definition (UHD) television screens at both the Science Centre in Glasgow and New Broadcasting House in London showing live coverage of the games. These screens are open to the public for the duration of the Commonwealth Games and free to view for visitors between 10am and 5pm in Glasgow and 12 midday to 3.30pm in London.

The pictures and sound for these screens is being delivered over the internet - from capture, through the full production chain, and finally to decoders and displays in the demonstration areas. This entire process normally requires very specialised and expensive television broadcast equipment but in this case it is all being handled using normal IP networks and commercially available computing equipment. Below you can see a short video produced by R&D engineer Alia Sheikh which explains the work the department has been engaged with in this area and the reasons why BBC R&D thinks IP delivery is the future for TV delivery.

For the Commonwealth Games BBC R&D’s IP TV delivery infrastructure is spread over a number of different locations to demonstrate the flexibility that an IP based production system brings. While pictures and sound are being captured in the venues, the audio gallery providing the commentary is in London and the television production gallery is located in Glasgow. Below you can see how our IP based end to end infrastructure is spread across the UK to deliver UHD TV to our public demonstration areas. 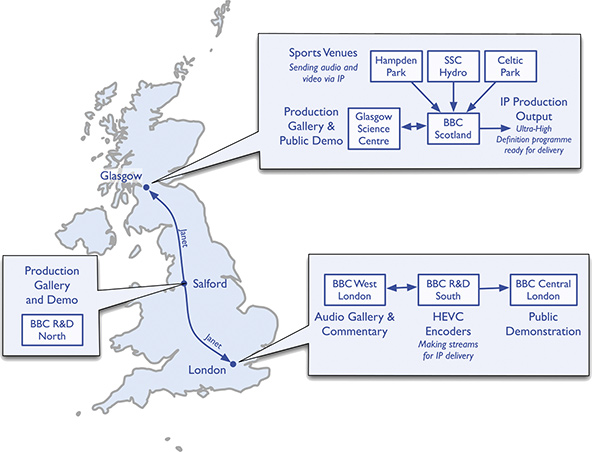 While delivery of television by IP is on the increase, a lot of people still receive their television using traditional transmitters and receivers and will do so for some time to come. Not all of the UK has reliable high speed internet connections so alongside IP delivery, the department is also demonstrating the transmission of UHD content over the existing Digital Television Transmission (DTT) network. BBC R&D are working with the rest of the broadcasting industry to ensure that the standards exist to distribute UHD content to as many people as possible no matter the delivery method.

Motion Blur - The Challenges of UHD

Beyond the challenges of delivering UHD content to people’s homes there’s also the issue of how to get it working properly once it gets there. One challenge is that with higher visual definitions motion blur becomes more of a problem for video images, especially with fast moving subjects like the athletes at the Commonwealth Games.

One solution is to increase the frame rate of the television (the rate at which the image on screen is refreshed) from 50fps to 100fps. To sharpen motion, you can also shorten the camera shutter speed, but at conventional frame rates this leads to judder. A frame rate of 100 fps enables the eye to fuse motion in a realistic manner, even with a short shutter opening and is also high enough to avoid visible flicker. BBC R&D is involved in ongoing discussions with other European broadcasters to create standards for UHD frame rates. The image below shows a comparison of shutter speeds of 1/100 and 1/300 of a second. 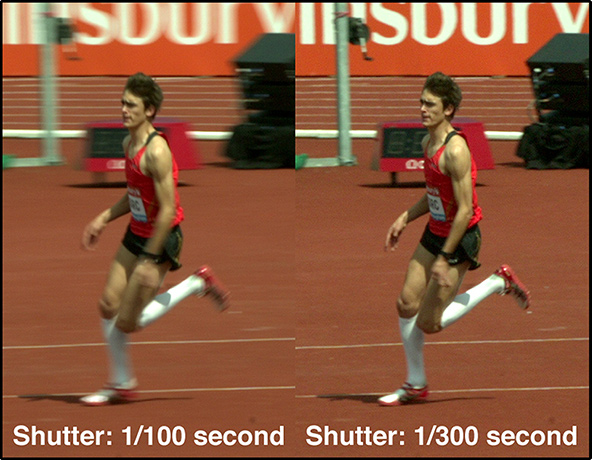 Along with the technical challenges IP-delivered UHD TV presents to the engineers at BBC R&D, it also provides a host of new production and editorial opportunities. One major advantage of building an IP based system is how configurable it is.

A television studio is a collection of very specialised pieces of equipment, very often with only one purpose each - a vision mixing desk for example or a preview monitor. Moving from a hardware to a software based system means that devices can be reconfigured to the needs of different production teams quickly and at little expense. The gallery production equipment in R&D’s experimental IP based television production gallery uses consumer computing hardware so a tablet can be a production schedule one day and a sound mixing desk the next. Or both. This reconfigurable nature of IP based production drastically reduces cost and increases working flexibility. 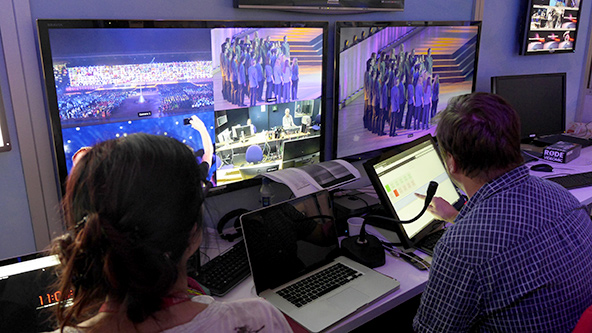 The BBC has always delivered high quality crafted television, first in black and white, then colour, using both analogue then digital delivery methods and most recently moving from standard definition to HD. UHD TV and IP based production are another evolution of the art form that provides the organisation with yet more exciting opportunities to make the best television we can and deliver it to audiences in increasingly cost effective ways. BBC Research & Development’s work ensures that when the UK is ready to switch to UHD, the BBC will be as well.

To take a look behind the scenes at a working IP television production gallery please visit us at the Glasgow Science Centre between 10am & 5pm for the duration of the Commonwealth Games. You can also watch live UHD coverage of the Commonwealth Games delivered both over IP and using digital television transmitters. Finally you can get hands on with some of the exciting new experiences that UHD video and IP delivered TV make possible including a chance to look around a 3D live video of the Hydro Stadium using the Oculus Rift headset.