TV White Spaces are the gaps between the Freeview transmissions that deliver TV to your antenna at home. At BBC Research and Development’s showcase at the Glasgow Science Centre, we are demonstrating the use of TV White Spaces to provide extra spectrum to deliver multimedia to content to portable devices .

The BBC R&D showcase at the Glasgow Science Centre is currently showing visitors how broadcasting systems of the future might work, from capturing content in ever increasing quality, producing compelling programmes, through to delivering the finished product to our audiences. One of our demonstrations shows how TV White Spaces (TVWS) could be used to provide extra radio spectrum to deliver multimedia content to portable devices. TV White Spaces are the gaps between the Freeview transmissions that deliver TV to your antenna at home.

If you watch or listen to BBC programmes (for example, via iPlayer) wirelessly at home on a laptop, smartphone or tablet PC, you will probably use a Wi-Fi connection via your home broadband router. Every individual Wi-Fi connection uses up spectrum capacity; if the trend to view “on demand” over Wi-Fi continues there is a risk that the Wi-Fi system will become increasingly congested, leading to more buffering and failed connections.

Ofcom, who regulate the spectrum in the UK, have embarked on a process of allowing the TV White Spaces to be re-used by low power devices on an unlicensed basis. There is, however, a danger that any device operating in the UHF TV band could cause harmful interference to existing licensed users. BBC R&D, together with our colleagues in BBC Distribution, has been working closely with Ofcom to try and ensure that the release of TV White Space spectrum is compatible with maintaining reliable Freeview TV coverage.

Since Ofcom announced its plans, a number of uses for TVWS have been proposed, including broadband connections to rural communities and wide area networking to support so called "smart cities" and the “Internet of Things (IoT)”. Some of these applications are currently being tested in a series of white space pilot trials organised by Ofcom.

Because of the way that Freeview is broadcast, the number of usable TV White Space channels will vary in different parts of the UK - in some cases there may be no white space at all. The TV White Space is also used for radio microphones in TV studios, outside broadcasts and theatres. Events such as the Commonwealth Games make heavy use of these services and further reduce the amount of White Space available for new unlicensed uses. We have test equipment on hand at the Glasgow Science Centre that shows the amount of White Space that is typically available. 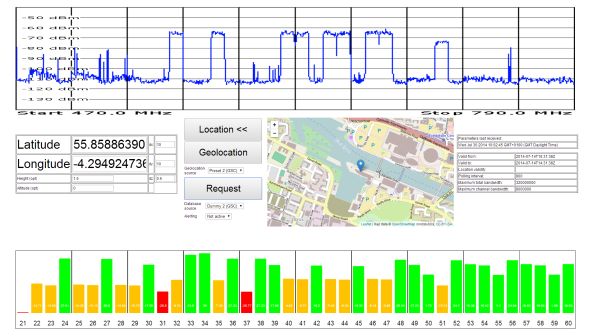 As well as liaising with Ofcom to protect TV reception, BBC R&D has been thinking about how white space technology could be used to benefit our audiences; the newly available spectrum could provide opportunities for innovation, making BBC content more widely available. Our prototype system, currently operating as part of our showcase at the Glasgow Science Centre, uses TV White Space to deliver BBC content wirelessly. A TVWS transmitter could be embedded into an Internet-connected set-top box or smart TV, which would act as a gateway to deliver live or on-demand programming to a variety of devices in the home. As well as reducing the strain on Wi-Fi, the lower frequencies used for TVWS offer other advantages; they propagate better in a home environment than Wi-Fi frequencies, providing better indoor coverage (or, the same level of coverage at a lower transmit power).

Because the availability of White Space channels cannot be guaranteed in every location, our solution for TV White Space might in the future form part of a wider distribution system incorporating other systems such as Wi-Fi and cellular. Your smart device might even be able to switch seamlessly from a broadcast provided over 4G to one over a TV White Space channel, as you move from outdoors to inside.

You’ll be able to find out more about TV White Space and see our prototype multimedia system in action at BBC R&D's live demonstration area in the Glasgow Science Centre until 3rd August.