In 2012 the BBC pioneered a new type of live, multi-platform broadcast at the Olympic Games in London. Making the games available across TV, radio, online, on mobile and through the red button, the BBC redefined what audiences could expect from the coverage of large live events and this style of presentation is now taken as the norm for the BBC’s coverage of events like Wimbledon, Glastonbury and the World Cup.

The BBC is currently gearing up for the Commonwealth Games in Glasgow where once again audiences will be able to keep up with events across a number of different mediums. Away from the TV, radio and web coverage however the Commonwealth Games also gives the BBC an opportunity to explore how it might cover such events in the future and provides a live test-bed for some of the broadcast technology the organisation has been developing over the last few years. Step forward, BBC Research & Development.

For the duration of the Commonwealth Games BBC Research & Development will be running a second broadcast in parallel with the one supplying your TV, radio and web content. You won’t be able to receive this second broadcast in the home as the technical infrastructure doesn’t exist yet to deliver it but you’ll be able to come and get a taste of it at our public showcases in Glasgow and London.

The BBC R&D blog will be covering the projects that have contributed to this “other” broadcast in greater detail over the course of the games, giving you an insight into the kind of things the department is working on, the people involved and the rationale behind why we do what we do. In the meantime here’s a brief rundown of the projects we’re taking to the games and what you can expect if you come visit us at one of our demonstration areas.

What is ultra high definition? Put simply it’s sharper, clearer TV pictures with better colour representation and smoother motion. Think about the move from traditional CRT TVs to High Definition flat screen panels and you’re getting the idea. In reality it is of course much more complex than that and there are a many factors the BBC has to consider when in order to move to a UHD broadcast model. Currently the technology is in its infancy and there are a number of different UHD formats out there. For the Commonwealth Games BBC R&D is working with a UHD standard capable of broadcasting pictures with up to four times the resolution of standard High Definition. You’ll be able to come and see the games in pin-sharp UHD for the first time at our public showcases. 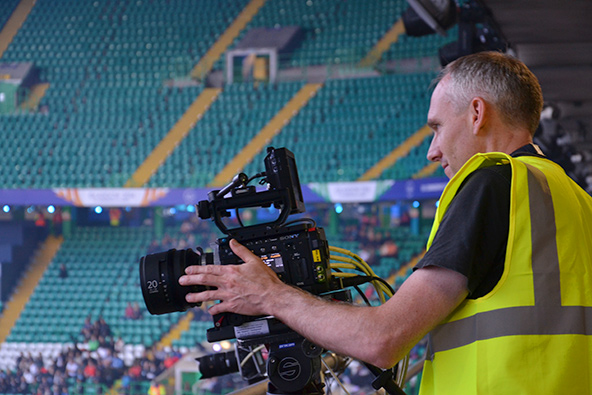 One of the factors affecting UHD TV is that as the resolution increases, the rate at which the image refreshes on the screen (the frame rate) also has to increase to avoid flicker and maintain the resolution of moving images. The High Frame Rate TV demonstration in the Glasgow Science Centre will show that this is even advantageous at “regular” HDTV display resolutions, let alone for UHDTV. A frame rate of 100 frames per second enables the human eye to fuse motion in a realistic way and is also high enough to avoid visible flicker.

In 2010 BBC R&D began to imagine what a television broadcasting system based around internet delivery might look like. Producing and delivering TV over IP rather than traditional television transmitters and receivers brings with it a number of benefits to audiences and the broadcast industry including more flexible ways of working, increased output, reduced costs and the possibility of entirely new forms of content. At the Commonwealth Games BBC R&D will be testing out its vision for a new IP broadcasting system which aims to take advantage of the increasing speed and ubiquity of internet networks and IT technology.

Producing and distributing TV over IP also enables a new technical infrastructure and working practices. As a demonstration of how IP delivered TV might be made in the future, The Clyde Suite in the Glasgow Science Centre will host an experimental IP Production Gallery where you can see what goes on behind the scenes. We’ll be talking more about this work in a later post. 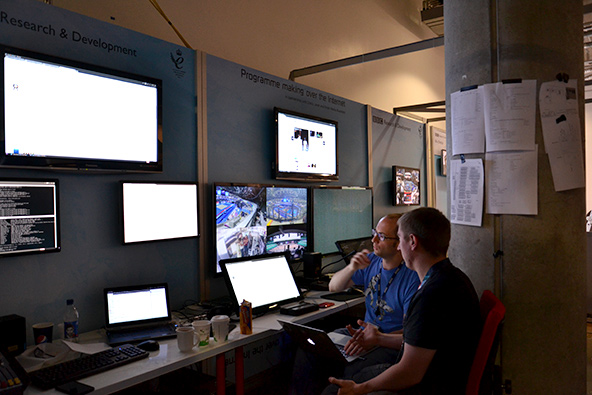 As well as demonstrating what a traditional broadcast experience might feel like in the future BBC R&D will also be showcasing some of the work it’s been involved with in developing entirely new audience experiences:

The Augmented Video Player prototype will be showing what can be done when programme makers have easy access to streams of metadata that they can use to make their content richer. An example of in-vision data during the gymnastics coverage at the Commonwealth Games will overlay the performances of gymnasts with details of each movement they perform, providing an extra layer of information and understanding for the viewer.

Exploring From your Home

The Venue Explorer allows you watch live video feeds on your tablet and then zoom into the images and pan around. A fixed, wide angle camera supplies UHD video from venues which means there is no loss of resolution as you manipulate the image. The audio is automatically remixed to correspond to the area being looked at, and graphical overlays provide data about what you see. At our demonstration areas in Glasgow and London you will be able to use Venue Explorer to explore the athletics stadium at Hampden Park. 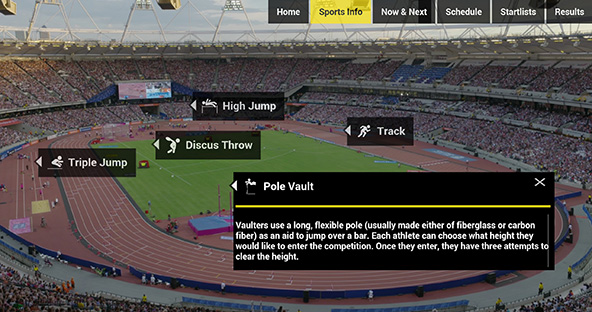 Further opportunities to explore the Commonwealth Games venues will be presented through our work with Virtual Reality technology. The Oculus Rift headset allows navigation of 360 degree videos simply by moving your head. By combining this method of navigation with the department’s ongoing research into 3D audio you’ll be able to experience being in the audience at The Hydro Stadium as the events there unfold.

Making our content available to people on the move is becoming increasingly important to the BBC. Many people consume BBC on mobile devices from browsing bbc.co.uk on their smartphones to watching iPlayer on their laptop or tablet. To enable the standard of service audiences expect from the BBC, research teams have been exploring a mobile 4G broadcast model that has the potential to deliver video in a consistent quality, without buffering, to many users simultaneously. 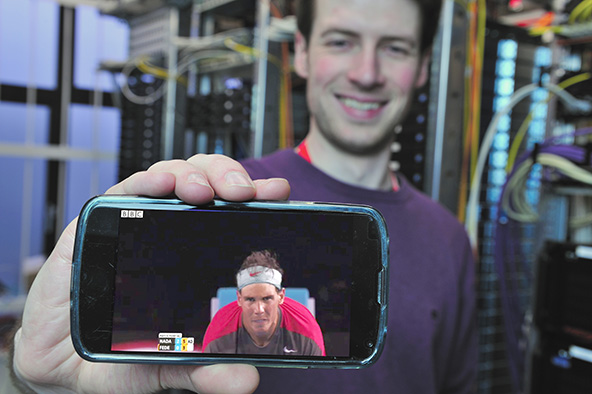 TV White Spaces are gaps between the channels currently used by Freeview transmitters. With careful planning other services can be fitted into these gaps. BBC R&D is very interested in how the new spectrum provided by White Spaces might be used - delivering broadband to rural areas, providing more room to expand Wi-Fi in your home and many other applications. At our display in Glasgow, you'll be able to come and find out where the White Spaces are and view our demonstration that uses TV White Space to deliver multimedia content around a home.

So in brief that’s what BBC R&D will demonstrating at the Commonwealth Games over the next few weeks. To experience the first ever UHD TV broadcast of a Commonwealth Games delivered over IP and get hands on with some exciting new audio/video experiences, please come and visit us between 10am and 5pm in the Glasgow Science Centre’s Clyde Suite or the Media Cafe in New Broadcasting House in Central London.

The demonstrations in Glasgow will be staffed by R&D engineers for the duration of opening hours whereas our London experience is self guided. However there will be R&D staff on hand between 11am and 2pm in New Broadcasting House if you have any questions. For more on what the BBC as a whole is doing at the 2014 Commonwealth Games please join in at the BBC at the Quay festivities. Make sure to also keep an eye on @BBCRD for updates from us during the Commonwealth Games.