At BBC R&D we are investigating spatial audio systems which we believe can deliver more improved listening experiences for BBC audiences. There is a lot of interest in spatial audio in the industry and there are many different systems being considered. We have published two freely-available datasets which can be used in evaluation of spatial audio systems, a set of audio files and a set of impulse responses.

The metadata in the SAQAS files uses the Audio Definition Model (ADM), which was recently developed and published by the European Broadcasting Union (EBU). Our team has been heavily involved in this work. The ADM describes the technical format of the audio data which allows it to be correctly rendered, as well as the content of the signals and relationships between them. Not only will it mean each track can be correctly rendered, but also allows object-based audio to be represented, where the characteristics of the audio tracks can change over time. The ADM is included as XML in the BWF files using a new extension to the file headers. However the ADM is not restricted to use within BWF files and could also be represented in other formats such as JSON.

A set of five files is currently available. The aim is to develop these over time to form a comprehensive library of test scenes for evaluating spatial audio codecs, rendering algorithms, and reproduction systems.

The files are provided with a Python software library to allow playback using an open-source spatial audio rendering application, the SoundScape Renderer. The software provides a reference implementation of reading and writing the ADM with BWF files. The files can be read and played back to a target loudspeaker or headphone system using the rendering techniques available with the SoundScape Renderer. 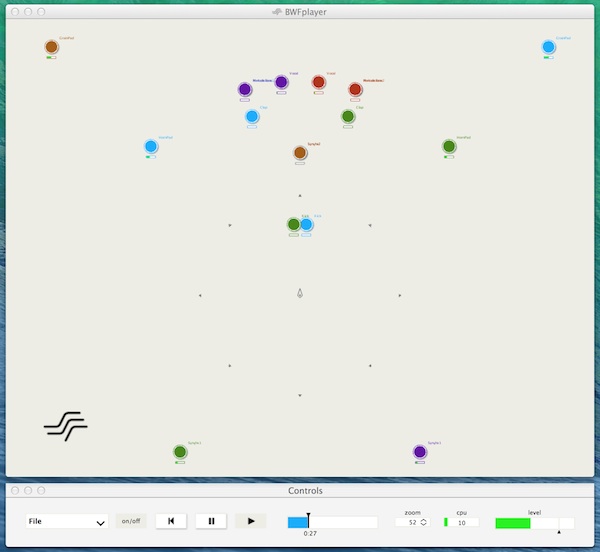 A SAQAS file being played back with the SoundScape Renderer

SBSBRIR stands for the Salford-BBC Spatially-sampled Binaural Room Impulse Responses. This dataset was created in collaboration with Darius Satongar at the University of Salford. It is a library of impulse responses measured using a dummy head microphone. These are called binaural room impulse responses (BRIRs) as they capture both the binaural response of the head and ears and the response of the room. BRIRs can be used to simulate loudspeaker systems using headphones.

The SBSBRIR set was measured in the listening room at the University of Salford's Acoustics Research Centre. This room meets the requirements of ITU-R BS.1116, meaning it is suitable for critical listening tests. These requirements cover a range of acoustic properties of the room, including background noise levels and reverberation time. 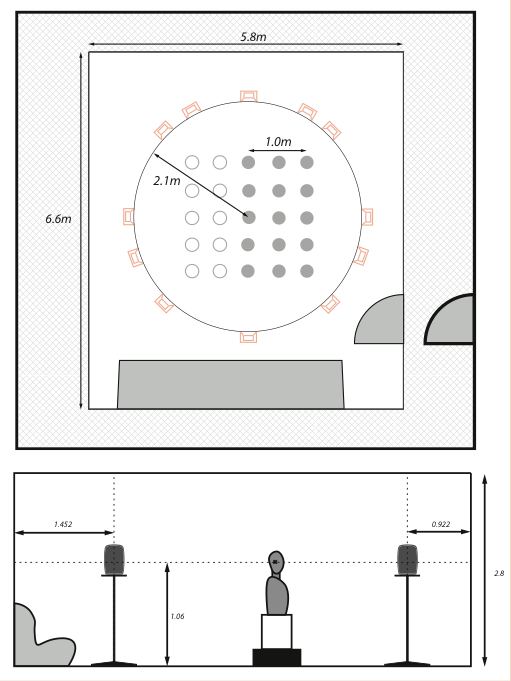 Twelve loudspeakers were used in the measurement, they were placed in a horizontal ring at positions commonly used in spatial audio systems. Measurements were made with the microphone system at 15 different positions within this ring, at each position it was rotated in 2 degree steps. This results in a set of 32,400 BRIRs that can be used to simulate the loudspeaker reproduction across the listening area including head rotations. The BRIRs can also be used to analyse loudspeaker reproduction using models of the auditory system.

The SBSBRIR data is available as WAV files and in the SOFA format, a new format for describing acoustic measurements. The SBSBRIR data can be used with the SoundScape Renderer to simulate loudspeaker systems. A set of example configuration files for the software have been created. Combining this with the SAQAS files and the Python software to play them, loudspeaker reproduction of a spatial scene can be simulated at various listening positions using headphones.

We hope that these resources will be useful to the research community, as spatial audio systems are developed and evaluated.