A summary of how you interacted with our trial immersive football experience from Wembley Stadium in May. The picture shows receivers used on the day to collect the sound gathered from our microphones.

Many of you might have seen our previous post on the Radio 5 live Football Experiment a few months ago. The experiment allowed you to choose the balance between the crowd and the commentary and where in the crowd the sound came from.

So how did it go? Well, there was a much greater demand for it than we were expecting. Over 5000 listeners tried to tune in when we only had enough capacity for 1000 at any one time. We increased capacity a little during the match, so 2800 people eventually managed tohave a go. Sorry for those people that didn’t get a chance to listen in. Those that were able to listen really liked it. 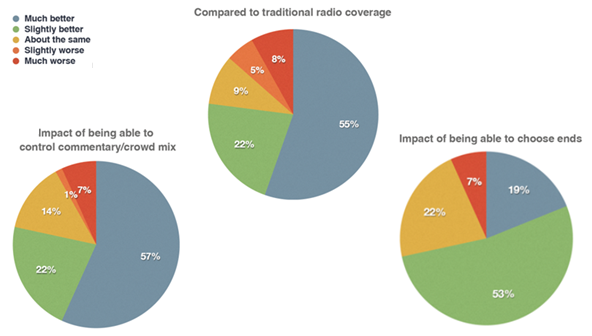 Most people liked being able to choose which end the sound came from, though when nothing was happening on the pitch it was a little difficult to tell the difference between the Palace and Watford fans. Most people thought it was a big improvement on traditional radio coverage and people really liked being able to change the balance between the crowd and the commentary. 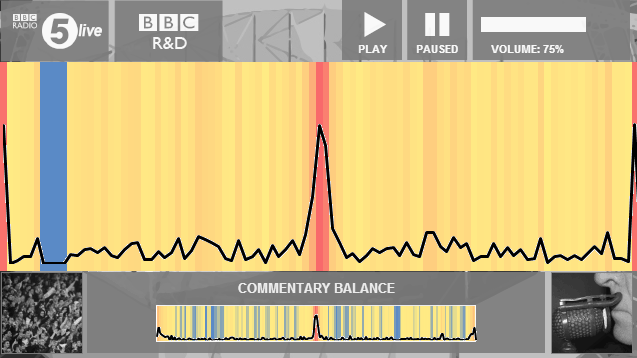 Did people move the controls when something happened on the pitch? No. Basically, when people started to listen they would play with the controls for the first minute or so, choose the experience that suited them best and stick with it for the rest of the match.

Many have asked whether we will be doing it this season. Well, probably not yet. This experiment was done using the computational equivalent of a cardboard box and a bit of sticky tape. We had to restart the server 20 minutes into the match and we never quite solved how best to get the three separate audio sources to people synchronised, so there is a bit of work to do yet, especially on the infrastructure such a service would need. But because the feedback was so positive, to use a cliché: watch this space!