Hello I’m Jasmine, a designer working on the Internet of Things in R&D. We thought it was about time we gave you an update on some of the things we’ve been working on recently, in particular our connected fob for radio.

One sector of The Internet of Things (IoT) concerns embedding digital behaviour into everyday objects, and giving them networking technology and a digital presence.
Our work aims to explore how IoT connected physical objects can deliver more valuable experiences than screen based interactions. Our research for the last few months has focused on prototyping a connected fob for real-time interaction with BBC radio content.

Radio has an implicitly active audience. It has natural advantages in that it’s live, personal and mobile, with strengths in the live experience, connectivity and topicality. However experiences with radio whilst driving are exclusively a one way deal, 21 million people each week* listen to the BBC in their vehicles, but can’t easily interact with their favourite station. *[RAJAR Q1]

In fact in a recent morning episode of the Radio 1 Breakfast Show, Nick Grimshaw expressed his frustration whilst driving, at having to pull over to search for the title of an unknown track. Our prototype attempts a solution to this problem… 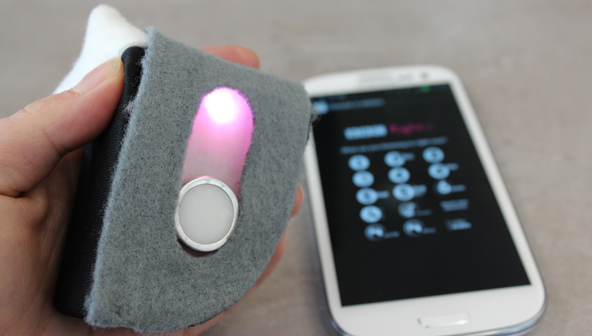 The connected fob is designed to be a single-function, single-touch device that connects via Bluetooth to your smartphone and then posts the action to a web service based on IRFS's RadioTAG and RadioTagBot prototypes.

Myself and Cefn Hoile have built a demonstration of a simple one-squeeze interaction that triggers a series of web-based tagging events to populate a bookmark-list of tagged moments for radio. At the very moment you want to identify a track and save it for later, you have an immediate skimmable or ‘eyes-free’ interaction at your fingertips.

The fob was built using a very small Arduino compatible circuit, with tactile buttons, a vibration motor and a Bluetooth module. When squeezed in almost any orientation, the fob communicates serially to an Android app, sending a ‘tag’ action. The fob gives instant haptic feedback to the user, and confirms a successful communication with the app by changing the sequence and colour of an RGB LED.

Currently, ‘tags’ are time-stamped and posted to the RadioTagBot prototype via twitter. In most cases RadioTagBot replies to the tweet with a track name or programme title and a link to the moment of audio once it is available for playback through iPlayer radio. The user can then navigate to this content quickly when they aren’t driving.

An aim of the project is to have both app and fob as customisable elements that can be mixed in different ways to achieve highly personalised user experiences. For example the fob would contain or facilitate interchangeable hardware, allowing you to write custom firmware to control sensors and actuators without having to create your own protocol. This would also mean that the app portion of the service would be completely configurable by the user. In an “If This Then That” fashion we can define a customised functionality, which links to one of a number of web services. 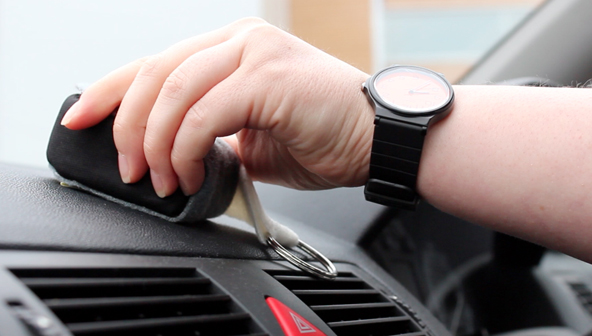 The next phase of this project will assess the fob’s safety, usability, and viability as a physical interface onto online BBC services. We’ll test the use of a one-touch object in various positions inside a driving simulator, and its resulting impact on a driver. We also aim to conduct a longitudinal study to analyze the situations and contexts when it is useful to have a connected fob.

We will also determine the direction of our continued research for such single-touch devices, whether they deliver more valuable experiences, and if they have mainstream appeal or are more orientated towards niche configurability.

This work has come about through the FIRM partnership, funded by EPSRC. FIRM itself is a partnership between the BBC, Salford University, Lancaster University, Goldsmiths University, NorthWest Vision & Media, BT, and with collaboration from MIT and Focus Innovation.