My team at BBC R&D has been working on new techniques and applications of computer-based image processing for TV production for many years, and it is really rewarding to see some of this work recognised in the form of a Queen's Award for Enterprise in the 'Innovation' category, for our contribution to the Piero sports graphics system.

The work that led to the Piero system has is roots in the Prometheus project that started way back in 1999 (showing just how long it can take R&D work to reach fruition!). Prometheus was a project to look at ways of creating and delivering live 3D content - and that means real 3D models, not just stereoscopic views of a scene.

One technique we developed allowed a rough 3D model of a scene to be created using a single camera, by inferring the depth of people using the assumption that their feet were in contact with the ground, and knowledge about the location and angles of the camera. We looked at whether this could be used for sports analysis, by allowing a view of a scene to be reconstructed from a viewpoint some way away from the real camera, for example to provide a view of a key incident in a football game from a top-down perspective or from the viewpoint of a linesman. Images of the players were extracted from the image (using chroma-key to separate them from the green grass), and automatically placed at the appropriate locations in a virtual stadium model. This was combined with virtual graphics drawn on the pitch to illustrate things like offside lines and player tracks.

We produced a prototype system to prove the concept, and licensed the patent and underlying software to Red Bee Media who went on to produce the Piero sports graphics system. The system was named after the Italian painter and pioneer of perspective, Piero della Francesca. We also worked closely with BBC Sport and BBC Outside Broadcasts to ensure the system was practical and met the needs of sports producers. 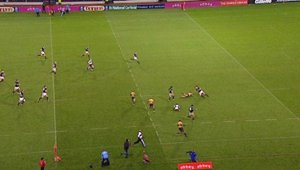 A raw image comes into Piero for processing. 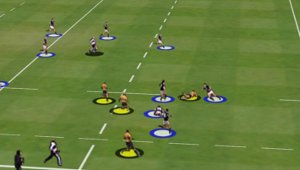 After processing additional info is embedded with the action, and can be viewed from a new angle.

Piero went to air for the first time during BBC's Match of the Day, on Saturday 25th September 2004, and has been in use by the BBC for both football and rugby coverage ever since. We have continued to develop new technology that has been incorporated into Piero, for example a method to track camera movement using image analysis, initially using pitch lines and later using more general image features, allowing it to be used for a wide range of sports without needing to rely on motion sensors on the camera mountings. Red Bee also continued to develop the system, adding a range of 'tied-to-pitch' graphics for other sports, and adding features such as a touch-screen interface and the ability to add 3D player models. Piero won an IBC Innovation Award in 2006. It is now used in over 40 countries around the world, and at last year's World Cup in South Africa, over 85% of all analysis effects used in the world feed came from the Piero system.

I'd like to thank my colleagues at BBC R&D who have worked with me on this project over the years, including Peter Brightwell, Jigna Chandaria, Robert Dawes, Hannah Fraser, Oliver Grau, and Chris Pike. I'd also like to thank the Piero team at Red Bee Media.

BBC R&D - Use of 3-D techniques for virtual production