A few months ago BBC Childrens 'Blue Peter' programme asked us to help them to capture a dry-slope skiing event at Ski Rossendale, north of Manchester, on the 15th February 2011. This was a high jump Guinness World Record attempt on a quarter pipe. We're partners in the i3DLive project and we quickly realised that this would provide the ideal tools for the program and for the Guiness World Records people to get the measurements they needed. BBC R&D took along 16 High Definition cameras to capture the jumps of nine different athletes, and captured it using our Distributed Capture and Processing System. After the on location recording, free-viewpoint video render techniques were then used to visualise the skiers jumps, and to observe their performance from every imaginable angle. 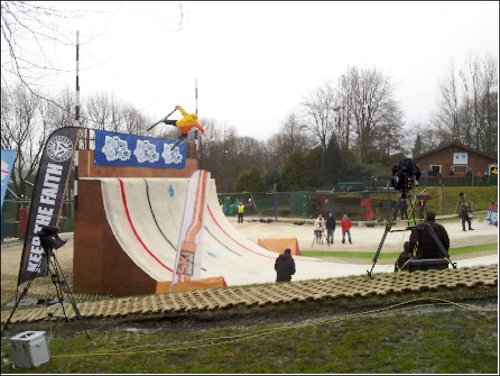 A number of technical challenges had to be solved to capture the event under the sometimes harsh conditions. This technique was previously developed for use in controlled studios and for sports like athletics and football where the pitch and ground has specific markers laid out. Examples of the technology at work on such sports can be seen on the iView project page. 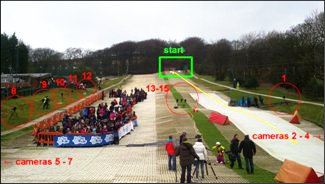 Figure 2: Our cameras arrayed along the ski slope

A new camera calibration technique was developed: The camera calibration determines the exact position and orientation of the cameras, as well as the focal length and distortions. This information is crucial to combine the single 2D camera images back to a coherent 3D reconstruction. For this purpose LEDs suspended from a long rod were used and software developed by BBC R&D extracted the exact camera parameters from that. 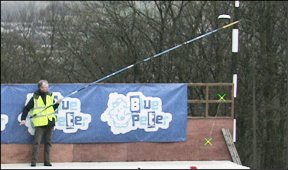 Segmentation or keying in the cluttered outdoor environment proofed difficult. A new segmentation technique developed in i3DLive by 'The Foundry' was used to generate clear keys of the action. A 3D model the action was then used by techniques developed by BBC R&D and Surrey University.

Two different approaches from BBC R&D and Surrey University for the rendering were finally used to generate novel views of the action. The free-viewpoint video was used to visualise the jumps, how the height were measured and to show the audience how much 'air' there really was between the skiers and the pipe. 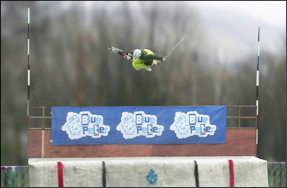 Figure 4: a virtual view of the jumper

The programme was broadcast 1st March 16:30 on BBC One and a selection of clips combined with other spectacular camera footage from the event can be seen on the Blue Peter web-site