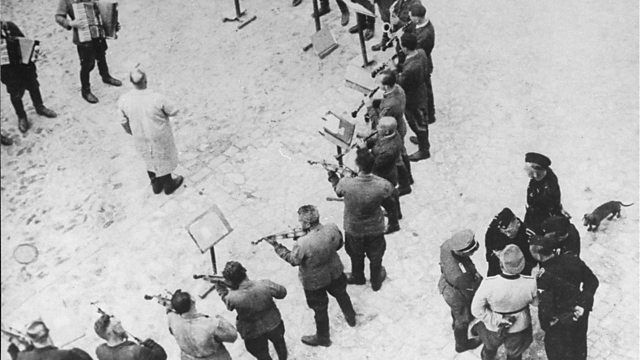 Music that survived the Nazis: Part one

The wealth of music during the Nazi era including secret sessions by Jewish musicians and others that evaded official scrutiny.

There is a common misconception that music under the Nazis was either ‘Degenerate Music’ to be suppressed or propaganda music that was officially sanctioned. Historian Shirli Gilbert shows that there was a wealth of different music-making during this period, including secret sessions by Jewish musicians and others, that managed to evade official scrutiny.

In this first episode, she explores the music of the Jewish Culture League, as well as the work of Lukraphon and Semer, two Jewish record labels active at this time. This includes a huge range of works recorded in Nazi Germany, from orchestral pieces to cabaret songs to religious singing of enormous beauty.
Contributors include Alan Bern, Ben Fisher, Martin Goldsmith, Lily Hirsch, Rainer E. Lotz and Sasha Lurje.

Image credit: Members of the orchestra at the Janowska concentration camp perform while standing in a circle around the conductor, Yacub Mund, in the Appelplatz [roll call area]. Courtesy of the United States Holocaust Memorial Museum.