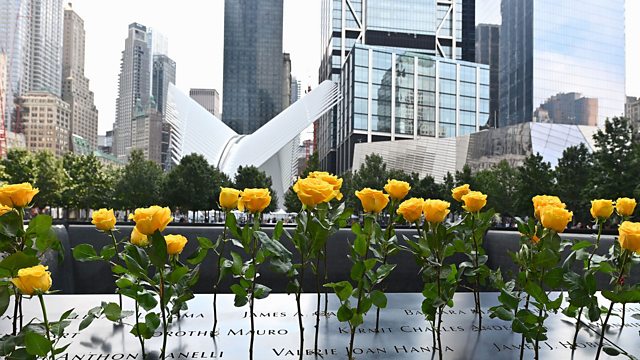 9/11: The day that changed our lives forever

New Yorkers and others remember how they coped with the trauma of 9/11.

Twenty years on from the 9/11 terror attacks which left 3,000 people dead, New Yorkers and those affected by the events recall where they were and how they have managed to process the horror of what happened. Presenter and New Yorker Joan Mastropaolo, now a volunteer at the 9/11 Tribute Museum takes us on a tour of the 9/11 memorial and explains what it means to her.

Former US poet laureate Billy Collins recalls how writing and performing the official memorial poem – Names - helped him and others reflect on the individuals who lost their lives in the immediate aftermath. Annie Thoms, a teacher from one of the schools close to ground zero explains how High School students, forced to evacuate amid the confusion, recorded and eventually performed individual stories of fellow New Yorkers caught up in the attack. Three-hundred firefighters died on 9/11 and journalist Ann Nelson recalls how she turned her own experience of befriending a fire chief struggling to deal with the events into a duologue eventually performed on stage in the shadow of Ground Zero - and in a film starring Sigourney Weaver.

Wajahat Ali, a 20-year-old student at the time recalls how 9/11 changed his and the lives of fellow Muslims overnight. He would create a drama reflecting on how the lives of Muslims in America were affected by the backlash. New Yorkers like Ray Birge, who was under the tower when the first plane hit, talk about how telling their stories in the 9/11 Memorial Tour helps them cope with the trauma that never goes away.