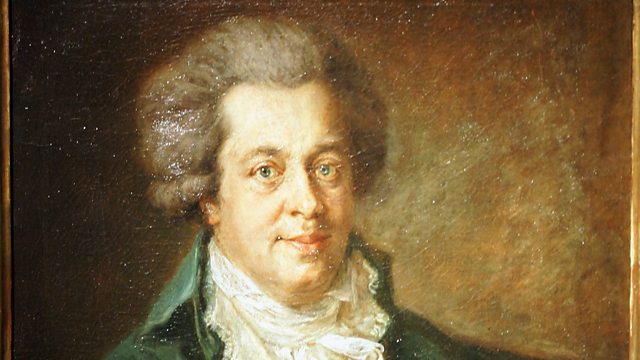 How Mozart's Requiem, written when he was dying, has touched and changed people's lives.

Mozart's Requiem, written when he was dying, has touched and changed people's lives. Crime writer Val McDermid recalls how this music helped her after the loss of her father. Hypnotist Athanasios Komianos recounts how the piece took him to the darker side of the spirit world. And a friend of ballet dancer Edward Stierle, Lissette Salgado-Lucas, explains how Eddie turned his struggle with HIV into a ballet inspired by Mozart's music.

Basement Jaxx used the Requiem in their live shows and on their album Scars - Felix Buxton reveals his love for Mozart and the divine nature of the Requiem.

And Mozart expert Cliff Eisen takes us inside the composer's world: how the orchestra and choir conjure visions of funerals, beauty, hellfire and the confusion of death. He recounts how Mozart was commissioned to write the piece by a nobleman who may have intended to pass off the work as his own. The stern challenge faced by people trying to complete the piece are described by composer Michael Finnissy, who himself wrote a completion of the work.

The Requiem was performed at the funerals of many heroic figures - Beethoven, Napoleon and J F Kennedy, among others. Gordana Blazinovic remembers one extraordinary performance during the horrors of the Bosnian war - a show of defiance and grief from the ruins of Sarajevo City Hall.