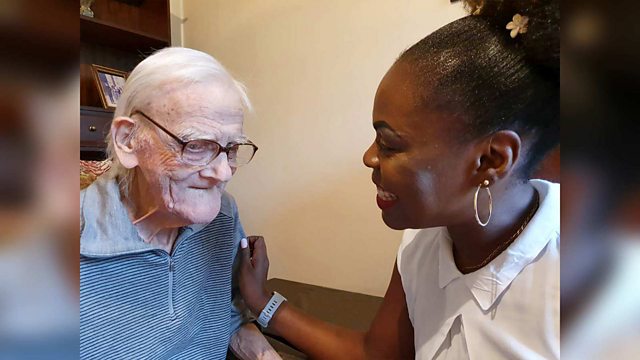 Meet the foreign care workers who look after Britain’s elderly and disabled people.

Well over 400,000 elderly and disabled people in Britain rely on home care, and many of the care workers are from other parts of the world: Africa, the Middle East, South Asia and Eastern Europe. Some are highly qualified professionals, but have moved into badly paid care roles because they are finding it hard to gain a foothold in their own professions in the UK.

As the population ages, these care workers are providing an ever more vital service. Yet their voices are very rarely heard. Blanche Girouard accompanies some of them on their rounds to hear their stories.

We meet Ziad, was once a lecturer in Economics at Damascus University. Forced to flee the war in Syria, he now lives in London as a refugee – and, unable to find work in academia, he has become a carer to an elderly Pakistani Muslim who has suffered multiple strokes.

Vedah was a nurse in Zambia, but decided to become a care worker because the role offered her the opportunity to move to the UK. She has experienced racism from clients, but still likes her work: putting a smile on a client’s face, she says, is her greatest reward.
And there’s Magda, who left her children behind in Poland when she came to Britain 13 years ago. Originally a music therapist, she could not find work in her own field and became a live-in carer – a highly demanding role that left little room for her to live her own life. But it led to an unexpected offer.

China and the virus