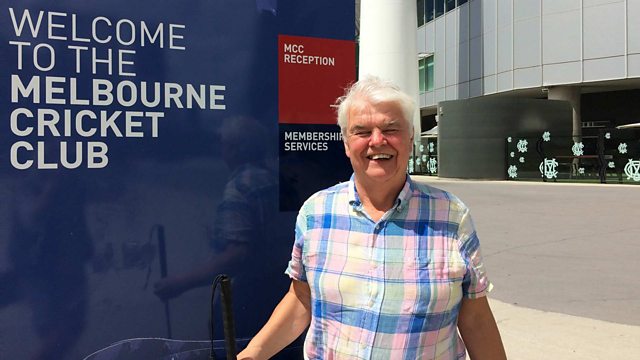 Melbourne: The sounds of the city

The Documentary Sounds of the City
Episode 2 of 2

Peter White, blind since birth, explores Melbourne through the sounds he hears.

Peter's latest spot of tourism takes him to Melbourne. As a blind child, all of Peter’s images of far-off cities were sounds, not pictures in a book; so as a huge sports fan, Melbourne felt so familiar as he listened on his crackly radio to cricket commentaries which sounded like they’d come from under the sea. So when he had the chance to capture the iconic sound of Melbourne for this series, the Melbourne cricket ground, was his first stop.

In the spirit of the Ashes, he went with David, another blind cricket nut and a native of the city. He was as excited as Peter was to explore the sports museum, wandering up and down the vast terracing. Like all of the best tours they then sneak onto the hallowed turf, treading where Bradman and Botham trod; sadly, also in the spirit of the Ashes, they were chased off the hallowed turf by a formidable lady, who said they hadn't got the right permissions.

No such access problems on Melbourne’s version of the golden mile, where Peter indulged another obsession: funfairs. He risked it although suffering from food poisoning at the time, and discovered that the screams of Aussie girls are much like those at Blackpool. The guardians of rollercoasters always seem to worry about letting blind people on, apparently forgetting that they’re not going to be steering them and, not seeing the huge dips, have less to fear than everyone else.

But the real joy of Melbourne is the outdoors, and the delight of wandering around with a microphone chatting to people. He meets a couple who'd emigrated twenty years earlier from Coventry who not only invited him to take a trip on their boat around the harbour, but also let him steer: such generosity, or foolhardiness! They were enjoying a day's fishing, but sadly Peter didn't catch anything-except the food poisoning, that is!