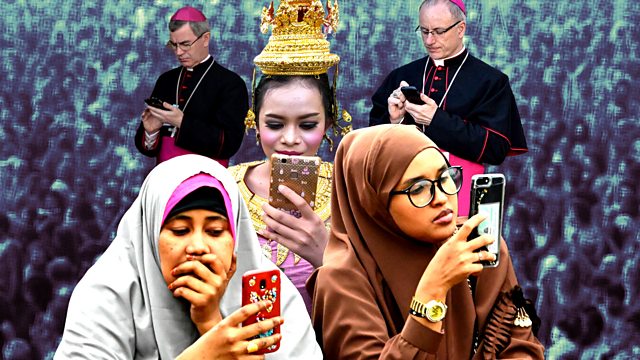 There are thousands of religious apps offering to help you worship in the right way. In the first of a new season exploring the digital world and the spiritual world, Sophia Smith Galer considers whether they’re a quick convenience, or a legitimate means of getting closer to your God, and asks if they are all really as pious as they seem?

Search iTunes, Google Play or the App Store and you will find thousands of apps offering to help you practise your religion. And as our smart phones become more and more essential to daily life, millions of us are downloading.

But is this just convenience? Or a new way of practising our faith?

In the US, the ‘OneTable’ app aims to bring young Jews without their own religious community, to celebrate the Friday night ritual of Shabbat. The app connects them with others in their area and it’s currently reaching up to 100,000 participants in 185 cities across the states. But for Orthodox Jews, using new technology is strictly forbidden.

In the UK, in the last year, the Church of England’s prayer apps were accessed more than five million times. But the church is incredibly worried as actual attendance is still falling.

But can using religion apps be a spiritual experience in itself?

Many major faiths have invested millions in religious apps to help them engage with young people who they feel are turning their backs on going to organised services. But is it always clear to users when a religious organisation is funding an app? And security research has also shown that overall, Bible apps have more malware than gambling apps!

Heart and Soul investigates whether some religion apps are stealing your data rather than cleansing your soul.

Finding and losing my faith online—Religion in the Digital Age