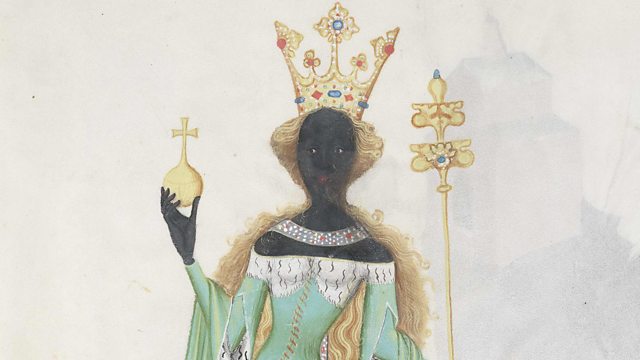 The Queen of Sheba

Why the legendary monarch still inspires people, especially young women, across the globe.

Three-thousand years ago, according to legend, a beautiful and wealthy queen embarked on a long journey to visit a celebrated king. He was King Solomon, and she was the Queen of Sheba.

The Queen of Sheba is the great eastern muse, shifting shape, race, appearance, according to the beholder. She may be historical, or she may be mythical, but she is still world famous.

In the Bible, she asks hard questions of King Solomon and leaves only after he gives her all that she desires. In the Koran, this pagan sun-worshipping queen is converted by Suleiman to the one God, Allah. In the Ethiopian national history, called the Kebra Negast, the Queen of Sheba returns from Jerusalem with a son by Solomon called Menelik, who founds the great royal dynasty of Ethiopia. A Scottish historian swears he can prove that she was actually Egyptian, a rewriting of the bearded pharaoh Hatshepsut.

There are other versions of this story too, spun from folklore and recreated by Hollywood. The Queen of Sheba is a temptress, a belly dancer, a witch. She has hairy legs, or an animal foot. She is part spirit, part woman. In Flaubert, she lustfully tempts poor St Antony, the monk in the desert. Beyonce performs in homage to her. Soaps, hotels, restaurants, aeroplanes are named after her. In Yemen and in Ethiopia, she is a symbol of national pride, and children are named after her. In Britain, haughty or flashy behaviour may be met with the sarcastic rejoinder: “Who does she think she is, the Queen of Sheba?” Nobody could be as magnificent as this mysterious queen of the south.

So what do we really know about her, so celebrated in religion, and in art and in life? Did she exist, and even if she didn’t, why does she exercise such a powerful hold on our imagination?

Sarah Sands traces the queen’s journey along the ancient spice route from the south through the Red Sea towards Jerusalem. She talks to the experts who know her story well – such as academic and writer Marina Warner who has studied her influence on feminism and folklore; Eyob Derillo from the British library, who speaks of her significance to Ethiopia; and Mustafa Khaled, the former Yemeni diplomat who regards her reign as a golden age for his country.

Sarah meets the contemporary “Queens of Sheba”, the writer, director and cast of an exuberant and defiant show about female and black empowerment; and the young and eloquent Yemeni art student who looks to the Queen of Sheba for hope for herself and her homeland.

And finally, the dean of Canterbury Cathedral, Dr Robert Willis, tells the story of the two ancient stained glass windows on the North Aisle. One depicts the Queen of Sheba meeting King Solomon. The next, the nativity scene. Two pilgrimages in search of power and glory, two different answers to hard questions. Who was the Queen of Sheba? She went on a journey, but was she also the expression of all our journeys? The journey may be geographical, intellectual, emotional or spiritual.

Who do you think you are, the Queen of Sheba? For at least some contributors to this programme, the answer may be yes.