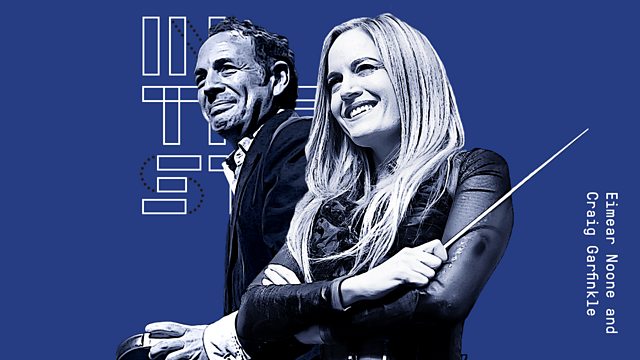 Eimear Noone and Craig Garfinkle: Composers in isolation

Composer and conductor team Eimear Noone and Craig Garfinkle race to complete a film score from their temporary lockdown studio in rural Ireland.

Cellist Matthew Barley connects with composer and conductor team Eimear Noone and Craig Garfinkle, as they race to complete a film score from their temporary lockdown studio in rural Ireland.

Eimear and Craig create soundscapes and soundtracks for feature films and video games, including the global hit World of Warcraft. Early in 2020 Eimear and Craig and their two young children travelled from the US to Dublin to compose and record the score for the animated movie Two by Two: Overboard. They recorded the first half of the score in February but then the Covid-19 restrictions radically changed their plans. They had to leave Dublin with what little equipment they could carry and head to Eimear’s family home on the West Coast of Ireland.

With an out of tune piano, limited IT resources, no access to a recording studio or live musicians, and the delivery date looming, the pressure is on. From trying to write upbeat music at a moment of crisis, to managing the baby’s nap time and homeschooling while working out the perfect chord progression for a scene of utopia, Craig and Eimear are navigating new territory. Will they do it?

All musical excerpts are courtesy of Moetion Films