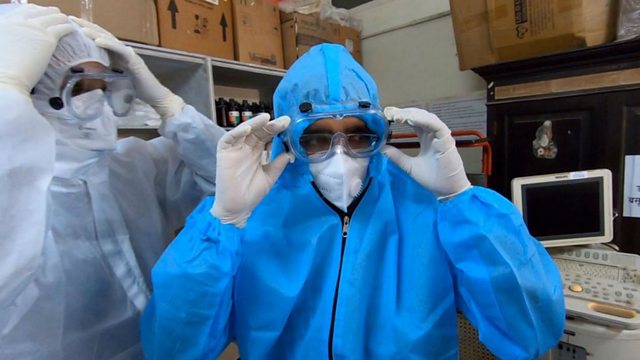 Filming from behind 5 layers

Stifling humidity, and sweating in PPE: filming with the staff of a Mumbai ICU.

India's financial capital Mumbai is its worst affected city with 70,000 confirmed Covid-19 infections and more than 5,000 deaths. BBC Marathi's Mayuresh Konnur filmed doctors and nurses in The King Edward Memorial hospital ICU to find out how they are coping. It was a challenging story to report.

The price of mocking Myanmar’s military
Last year members of a satirical drama group, the Peacock Generation were jailed for mocking the military, and still face additional charges. They were performing "thangyat”, a mix of poetry, dance and song traditionally used to criticise those in authority. Soe Win Than of BBC Burmese explains why this one fell foul of the government.

Salisbury poisonings remembered
A recent BBC series dramatized the nerve agent poisoning of Sergei and Yulia Skripal in 2018. Watching it brought back memories for BBC Russian’s Olga Ivshina, one of the first journalists on the scene in Salisbury.

The political power of K-pop fans
K-pop fans have been making headlines with their political activism. They've been involved in both the Black Lives Matter campaign and President Trump's rally in Tulsa, where they registered for tickets with no intention of attending, contributing to an embarrassing number of empty seats. David Cann of BBC Korean has been looking into K-pop activism.

The herders caught between two armies