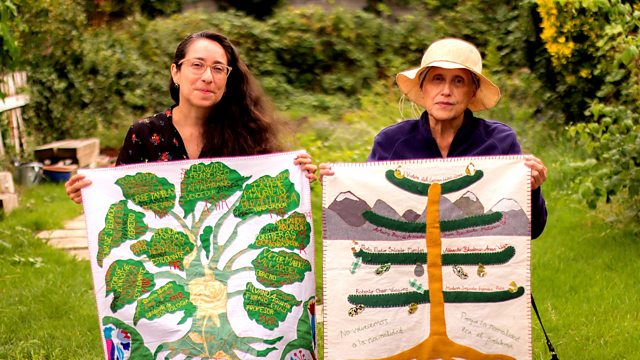 Sewing to protest in a Chilean prison camp

Activist and medical student Cristina Zamora found a creative way to survive after being taken from her baby daughter by dictator Augusto Pinochet's security forces in 1974.

Just two months after Cristina Zamora had given birth to her baby daughter in 1974, she was taken by Augusto Pinochet's security forces and thrown in jail where she found a creative way to cope. Embroidery, knitting clothes and stitching tiny love letters helped political prisoners like Cristina to survive. Afterwards, Cristina didn't discuss her nightmarish experience but over 40 years later when her daughter, Jimena Pardo, saw the prison crafts in an exhibition, Jimena plucked up the courage to ask her mother about her early life. Determined that the horrors of the dictatorship were never forgotten, Jimena set up a sewing project called Bordando por la Memoria (Embroidering Memory).

The exhibition is called 'Crafting Resistance' and can be seen here: https://warwick.ac.uk/services/library/mrc/archives_online/exhibitions/craftingresistance/photos/

The 'bride and groom of the Syrian revolution’

Disco and drama: the story of Ride On Time