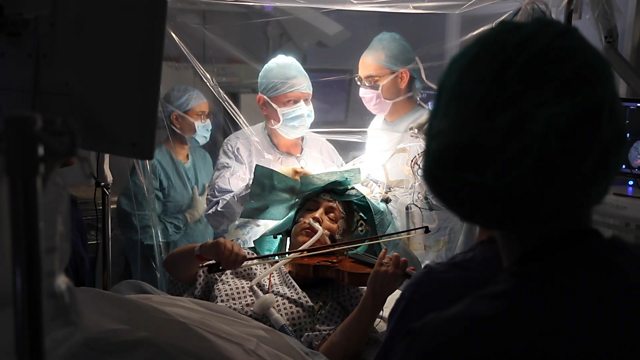 I played violin during my brain surgery

Violinist Dagmar Turner performed scales and improvised tunes while a tumour was removed from her brain so that surgeons could preserve her ability to play music.

In January 2020, Dagmar Turner was woken up in the middle of her brain surgery and handed a violin. It was her idea. She was an amateur but committed violinist and was willing to go to drastic lengths to keep playing the instrument. Dagmar had been diagnosed with a brain tumour in her right frontal lobe. It was dangerously close to areas of her brain that were responsible for coordinating delicate movements in her left hand - essential for her musical talent. So she sought the help of Dr Keyoumars Ashkan – he was a respected neurosurgeon but also an accomplished musician, so he understood her love of music. Dr Ashkan agreed to perform an incredibly rare procedure where Dagmar would play the violin during surgery so that he and his team could remove only brain tissue that would not damage her music skills.

Susanna Blackwell is a Swedish-American marine biologist who studies the effect of man-made sounds - from ships, drilling, anything unnatural – on marine animals. It’s brought her into very close contact with narwhals – these are incredible looking beasts sometimes known as the ‘unicorns of the sea’ because the males have a great long tusk.