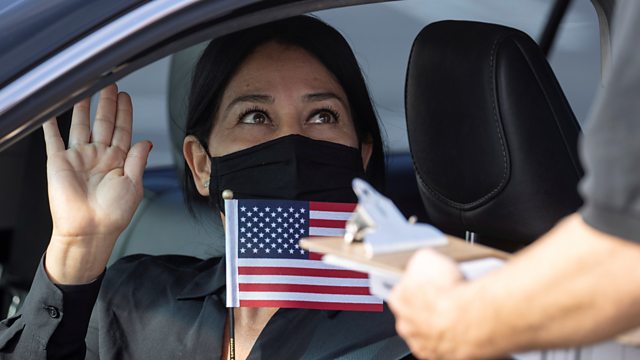 President Trump's crackdown on immigrants is popular with his core voters, but less so with corporate America.

President Trump's crackdown on immigrants is popular with his core voters, but less so with corporate America.

Manuela Saragosa asks whether this nation of immigrants is about to vote to close the door to the American Dream for millions of foreigners. Among them are Indian IT workers who have been left in limbo by the sudden suspension of H-1B visas, as relayed by immigration lawyer Poorvi Chotani of LawQuest.

Theresa Cardinal Brown of the Bipartisan Policy Center says there is widespread agreement among voters that the immigration system is "broken", less so on what needs doing. Mark Krikorian of the Center for Immigration Studies think tank says President Trump hasn't gone far enough. In contrast, Britta Glennon of the Wharton business school says that even the lighter restrictions under the Obama administration drove high value jobs out of the US.

(Picture: A new US citizen is sworn-in at a naturalisation ceremony in Santa Ana, California Credit: Reuters)

US Elections: What it means for healthcare

US Elections: The end of Reaganomics?