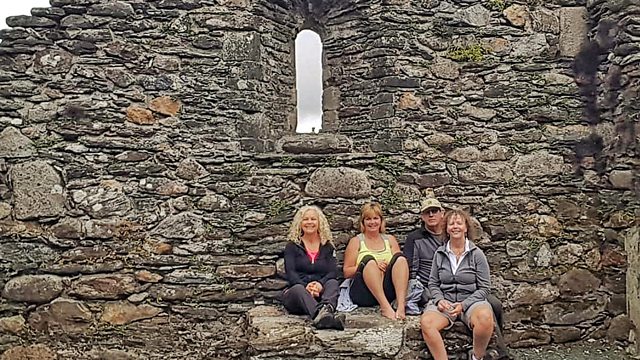 The pilgrim paths of Ireland

Manika Bébhinn Ramsay’s husband, Alastair, died suddenly in 2007. Walking along an ancient pilgrim path, St.Kevin’s Way in County Wicklow, Bébhinn recalls the horror of coping with a sudden bereavement and tells presenter Regan Hutchins how pilgrimages helped her to cope with her grief and how they have brought a new meaning to her life.

These old Ways of the Saints are being restored as increasing numbers of people - believers and non-believers alike - seek them out.
Traditions and rituals associated with the pilgrim paths continue and new ones are added as Ireland finds its spiritual footing for the 21st Century.
Along the path of St.Kevin’s Way Regan joins other pilgrims to hear how they are drawn to the Old Ways to resolve inner conflicts and to make peace with the often chaotic modern world.

We hear how paths such as St.Kevin’s Way, are being organised to reach increasing numbers of pilgrims and tourists alike and how they open up some of the hidden treasures of the Irish countryside. Spirituality is at the heart of these routes and the practice of walking along them has brought strength and peace to travellers across the centuries.