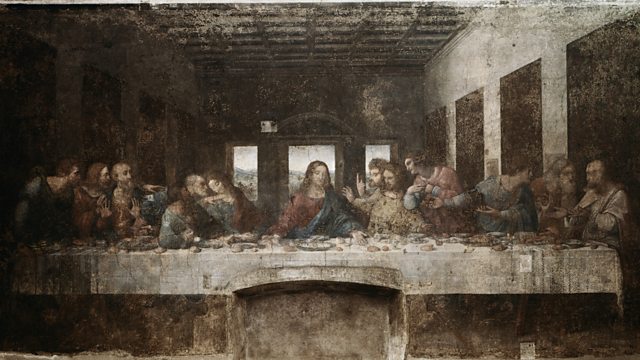 This year is the 500th anniversary of the death of Leonardo Da Vinci and marks that start of a major series of international exhibitions celebrating his life and work. In this edition of Heart and Soul we’ll explore the creation and continuing impact of one of the most important and famous religious paintings in the world – Leonardo’s masterpiece – The Last Supper.

Da Vinci began The Last Supper around 1495, the fact that it’s survived more than 500 years is a miracle in itself. Da Vinci used a new technique to create vibrant and life-like portraits of Jesus and his disciples, but from the start it required contestant retouching. Various invading armies have abused it and even tried to cut the plaster down to take as a trophy. A century ago the painting was in such poor repair that it was feared it would be lost completely, but still it endured, fragile but undiminished and more than 300,000 people a year queue for strictly limited tickets to see it.

Art historian Elizabeth Lev tells the story of The Last Supper and decodes the religious imagery that has so entranced the world. Da Vinci has depicted a seminal moment in religious faith and history. Jesus is seen reaching for the bread and wine – this was the first Eucharist – arguably the birth of Christianity. The Last Supper ushered in the Renaissance and changed forever the way artists portray the relationship between Man and God.

But it is an image that is hugely symbolic to Christians around the word and Elizabeth speaks to the tattoo artist who spends hours etching it faithfully onto the body parts of people and the Mexican worshipper who shares how people around her have the image on the walls of their houses to remind themselves of the Last Supper.

My faith and my large family

The pilgrim paths of Ireland