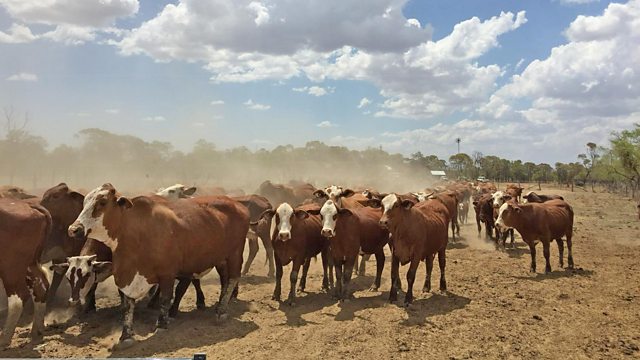 The Compass Ground Shift: The Farming Revolution
Episode 1 of 4

Ground Shift talks to the next generation of farmers in Ghana, Australia and the USA.

Anna Jones explores the challenges facing family farms in the American Midwest and the outback of Australia, and discovers how Millennial farmers are embracing change to ensure their survival.

In Iowa, Anna meets two young corn and soybean growers - Brandon Pickard, 28, and Wade Dooley, 35. Both are struggling to make a living from poor grain prices but coming up with very different ways of earning extra income. Pork or popcorn anyone?
In North West Queensland, Anna heads to a remote cattle station to meet a family that believes digital technology is the key to their future. The Harringtons run 2,000 cattle on 44,000 acres but it is not big enough to support two families. William Harrington, the fourth generation, had to try something new in order stay in the family business, so he invented a surveillance camera that monitors water troughs – saving farmers huge amounts of time and money. William’s electronics are now more profitable than the cattle.

But some things on a cattle station never change – it’s mustering season and Anna finds herself in the thick of the action.

(Photo: Cattle on the muster in Australia. Credit: Olga Downs)