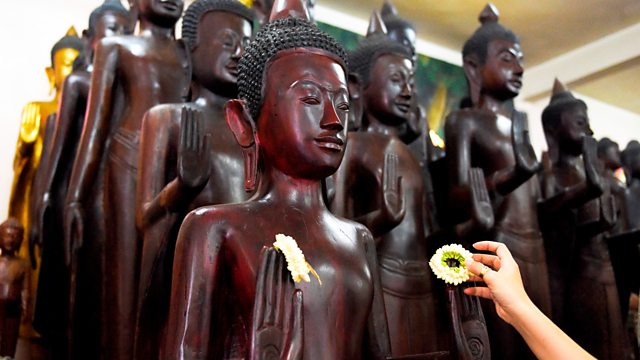 What do young Cambodians think of the way Buddhism is developing in South East Asia and what kind of Buddhism they want in their country?

Cambodia has been a Buddhist country since the 13th Century, apart from a period under the Khmer Rouge. Ninety-five per cent of the population identify as Buddhist. Journalist and blogger, Kounila Keo, brings together young people in Phnom Penh, to hear what they think of the way Buddhism is developing in South East Asia and what kind of Buddhism they want in their country. We have a panel of young Buddhists, together with a live audience, at Factory in Phnom Penh, to discuss issues such as violence, identity, healing, the position of women and gender.

How much do young people see other countries such as Japan, Myanmar, Sri Lanka and Thailand, as exemplar of a Buddhist way of life? How much should monks be engaging with the outside world? To what extent should modern monks stay in the pagodas, purifying the religion and protecting Buddhism for future generations? In what way can Buddhist principles help the development of Cambodia both economically and socially?

Our panel and audience explore questions such as these and ask how Buddhism can be relevant in the lives of young people today. How do world events affect both their Buddhist and Cambodian identity?

(Photo: A Cambodian woman prays before statues of Buddha at a pagoda in Phnom Penh. Credit: Tang Chhin Sothy/Getty Images)

Religion and climate change in Nairobi—Heart and Soul Gathering

See all clips from Buddhism in Cambodia (2)