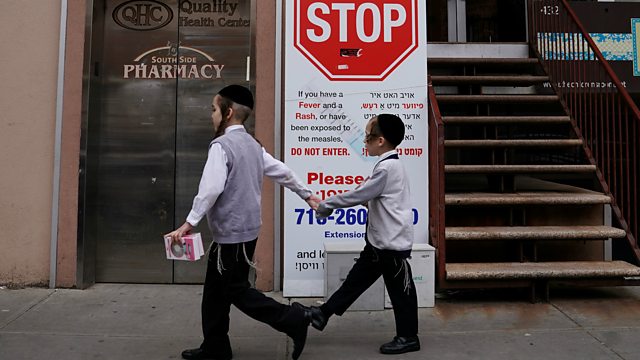 The French - the most vaccine-sceptical; US measles cases – mainly in New York’s Orthodox Jewish community; malnourished children in Madagascar at risk of death and complications

Global attitudes towards vaccinations are revealed in the Wellcome Trust’s Global Monitor survey. Our guide through the new data is Heidi Larson, Professor of Anthropology, Risk and Decision Science at the London School of Hygiene and Tropical Medicine who also leads the Vaccines Confidence Project. She says the most vaccine-sceptical country is France – because of past scares around different vaccines.

The success of vaccines means people have forgotten how measles can be fatal – and parents are now influenced by scare stories about vaccines. More than half of the 1,000 recent cases of measles in the US have been in the Orthodox Jewish community in New York city. We hear from some of the parents who still don’t vaccinate and from a family doctor about trustworthy sources of information.

Things couldn’t be more different in Madagascar where more than 1200 children have died from measles and parents walk for miles to have their children immunised. Half the country’s children are malnourished – which can increase the risk of complications if they catch measles. Vitamin A supplements are being given to help the immune system to work properly.

Next week on Discovery – could compulsory vaccines or a more subtle, psychological approach help to address vaccine hesitancy?

Photo: Children walk past a sign advising about a measles outbreak in the Brooklyn Borough of New York.
Credit: Reuters)