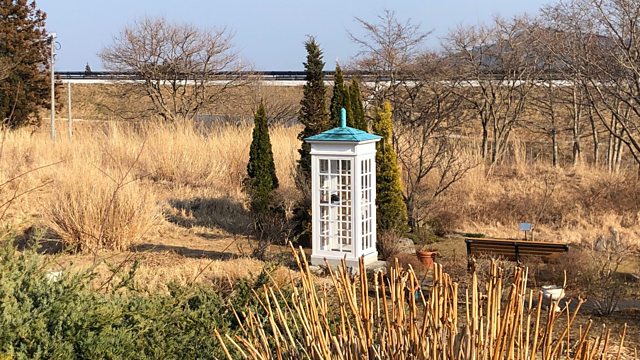 In Japan an unusual phone booth has become a place where the living can call the dead.

When an earthquake and tsunami struck Japan in 2011, 30ft (9.14m) waves obliterated coastal communities. The small town of Otsuchi lost everything including 2000 residents.

One resident, Itaru Sasaki, was already grieving his cousin before the tsunami hit. He had the idea of nestling an old phone booth on the windy hill at the bottom of his garden which overlooked the Pacific Ocean. This would be a place he could go to speak to his cousin - a place where his words could ‘be carried on the wind.’ The white, glass-paned booth holds an old disconnected rotary phone. He called it his Wind Phone.

In the aftermath of the terrible tsunami, as word of the phone spread, it became a pilgrimage site for those who had lost loved ones. In the sanctuary of the booth they would dial old phone numbers and talk to their loved ones.

Interpreter and journalist Miwako Ozawa visited Otsuchi in the weeks after the tsunami. In this programme she returns for the first time since 2011 to visit the phone and find out how it has helped people to cope with their grief.

We meet some of those who regularly visit the phone and we hear their stories and listen in to their phone calls. In many ways the wind phone typifies a very Japanese relationship with nature and death and with the invisible forces that connect us all. As the residents of Otsuchi face the slow progress of rebuilding their town and the frightening reality of future extreme weather, the wind phone is a reminder of those losses that won’t be forgotten.

A female rabbi in training

Football and belief for Egypt's Copts