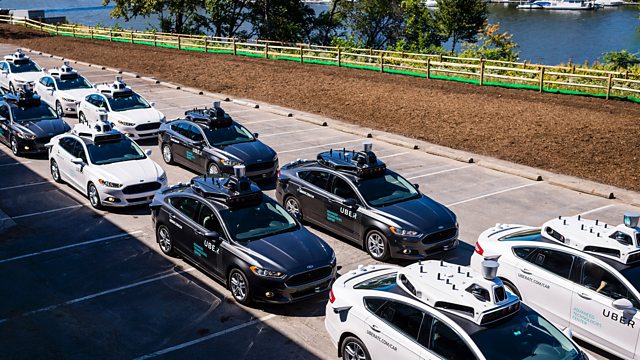 Robots on the road

Are robots about to take over our roads?

The world’s biggest car makers and technology companies are investing billions of dollars in autonomous vehicles. They believe it’s just a few years before computers with high-tech sensors do the driving for us, filling our roads with robot cars ferrying human passengers from A to B. But is a driverless future really just around the corner?

The BBC’s technology correspondent Rory Cellan-Jones travels to Arizona in the US – a hotbed for autonomous vehicle testing – to try out the robot taxi service developed by Google that’s already ferrying paying passengers around the suburbs of Phoenix, and discovers that robots still have a lot of learning to do when it comes to the tough driving conditions on busy American freeways. He also hears how Arizona locals have responded to sharing their roads with robots, and visits the Phoenix suburb that saw the first fatal accident involving a driverless car to ask if autonomous technology will ever be safe enough to gain public acceptance. Despite those challenges, we hear from car-maker Ford about its plans for a driverless car service in the next two years as car makers race to keep up with tech firms like Google and Uber in the autonomous driving space, and critics of the technology discuss how robot cars might change the dynamic between cars, pedestrians and other road users forever.

Amar: Alone in the world