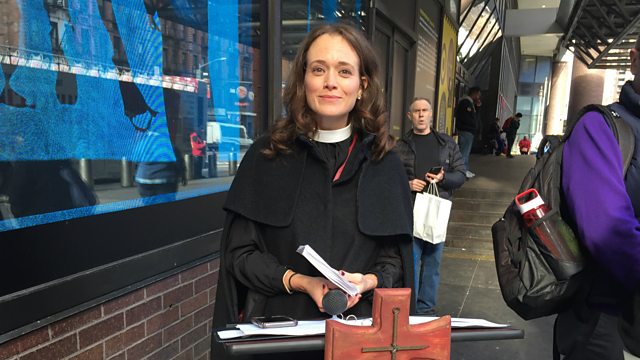 New York Stations of the Cross

In New York, a 'Stations of the Cross' bears witness to the scourge of sex trafficking.

For Easter weekend Rosie Dawson joins a group of the faithful in New York as they follow a very different Stations of the Cross - a series that bears witness to the scourge of sex trafficking - a modern form of slavery - that every year traps thousands of young girls and women in the city. It marks the start of a campaign against hugely controversial plans to make New York the first state in America to completely decriminalise the sex industry.

Rosie travels New York’s Via Dolorosa (The Way of Tears) that trafficked girls and women in New York often find themselves taking. Reverend Adrian Dannhauser is the guide on this alternative journey.

"If we legalise the industry we will go back to the days of the '70s when you had lines of African-American women lined up in Times Square like slaves on an auction block."

Rosie joins the pilgrims at the bus station and at JFK airport, the gateway into the US for so many women trafficked from abroad. We take in the notorious motel where men pimp the women they control. And finally a human trafficking intervention court, which recognises that those arrested on prostitution charges are likely to be victims of sex trafficking, violence and trauma.

Jewish and returning to Germany

Pick up your stretcher and walk!