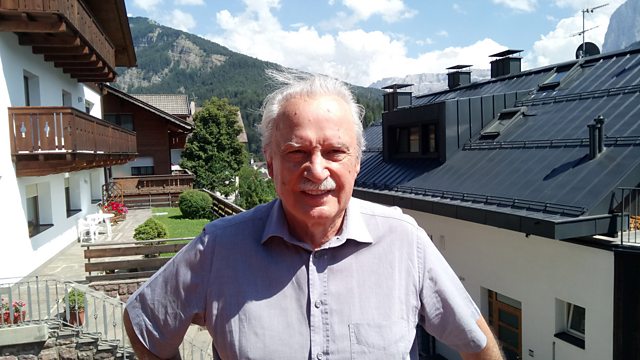 Giorgio Moroder: Together in Electric Dreams

He’s a legend who’s recognised the world over and across the generations as the pioneer of electronic dance music. And here singer, songwriter and producer Giorgio Moroder invites us into his home in the Italian Alps to talk to us about his amazing career, demonstrate his art on his home studio keyboard and remember decades at the top of groundbreaking music production.

Giorgio, who some people dub ‘the father of disco’ grew up in Italy in the 1950s. This year he turns 79 and is embarking on a world tour. His impact on popular music is huge and this programme attempts to work out what’s so special about his creations.

We hear about his musical roots and experimentation before examining what the Giorgio ‘magic’ brought to Donna Summer hits like Love to Love You Baby and I Feel Love. Her widower Bruce Sudano, who also worked with Georgio speaks about their relationship and the music.

Freddie Mercury, David Bowie, Britney Spiers, Cher, Janet Jackson, Bonnie Tyler and Kylie Minogue are among the artistes who have worked with Giorgio. He’s produced many famous hits we all know - Together in Electric Dreams with Phil Oakley, Take My Breath Away with Berlin, Call Me by Debbie Harry - and for Flashdance - What a Feeling. And his talents are all over other film music too – most notably Midnight Express and Scarface.

Meanwhile a musical about the life of Donna Summer recently played Broadway. Kaleigh Cronin who took the role of Giorgio tells us what she drew from the music master’s personality in her bid to do him justice on stage.

(Photo: Giorgio in front of his home in the Alps)

Zamrock: We intend to cause havoc