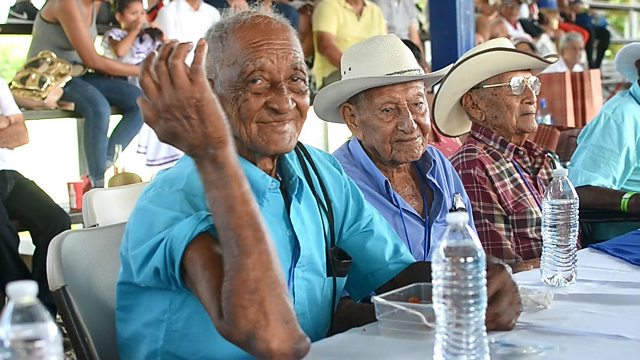 What is the secret to living healthily into very old age? CrowdScience reveals the secrets to extending our lifespans from Costa Rican centenarians and age researchers.

Human life expectancy has been increasing for decades. In many developed countries, we can now expect to live into our 80s, and it isn’t uncommon to live to 90 or even 100 years old.

But eventually our bodies fail, old age is undoubtedly a clear indicator of approaching death. This fact annoyed 79 year old CrowdScience listener Bill, who emailed in to set presenter Geoff Marsh the task of seeking out the secrets to a longer, healthier life. Bill has a personal target to live to 200 years old, so can he do it?

Well some people appear to age more slowly. In one part of Costa Rica, people commonly hit their hundredth birthday. CrowdScience’s Rafael Rojas visits these Central American centenarians to ask them their secrets to a longer life. Then, in interviews with the best age researchers around the world, including Professor Linda Partridge and Professor Janet Lord, Geoff reveals the science behind longer lifespans, and what people can do to live for longer, healthily.

(Image: A group of older men sitting together at an event, Costa Rica. Credit: Rafael Rojas)

Do green spaces make us healthier?

See all clips from How can I live a longer life? (2)