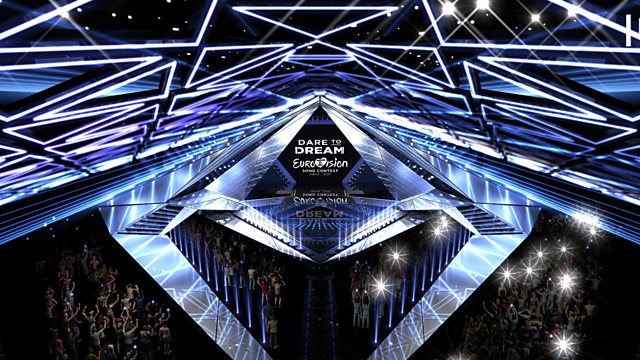 Come with us as we go backstage at the world's biggest live music event, the Eurovision Song Contest

Come with The Arts Hour Backstage to the world’s biggest live music event. The Eurovision Song Contest was started in 1956 with just seven countries taking part. This year, it’s being held in Tel Aviv, Israel and will be watched by over 185 million people across the globe. Forty one countries, including Australia, are competing to lift the coveted winner’s trophy. Even the U.S. pop singer Madonna is providing the interval entertainment.
Expect fireworks, glitter and dazzling sequins as presenter William Lee Adams goes behind the scenes during the tense and exciting rehearsal period before the semi-finals and final, to talk to the people who make these live shows the icons of glitz and glamour so loved across the world.
He’ll be talking to some of the biggest stars in European pop music taking part in this year’s show, including the multi award winning singer and co-writer of Russia’s entry Sergey Lazarev and Philipp Kirkorov, Duncan Laurence from The Netherlands, who has gone from writing songs for Korean pop stars to going centre stage himself, Tamara Todevska from the newly named North Macedonia and Mahmood, whose semi-autobiographical song Soldi, has gone viral, despite right wingers questioning if he was the right choice to represent his native Italy.
Artistic Director and choreographer Sacha Jean Baptiste, explains why she is working with performers from not one, but two countries this year
And we’ll also be talking to the contest’s Executive Producer Zivit Davidovitch, the man who describes his job as all the fun things that make a show - Head of Production Ola Melzig and the behind the scenes supremo, the man known as the godfather of Eurovision, Swedish Contest Producer Christer Bjorkman.
However the event hasn’t been without controversy, already Ukraine has pulled out and there has been much debate about holding the contest in Israel, so we’ll be finding out with historian and Eurovision fan Dr Dean Vuletic, how it’s possible to host a contest of this size, with so many countries, amidst different political agendas