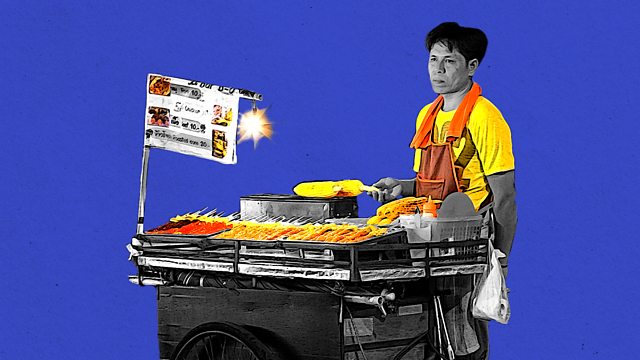 The end of the road for street food?

Why a much-loved and much-needed part of life in South East Asia is under threat.

Street food is one of the many charms of South East Asia, but there are signs this much-loved way of life and much-needed source of food is on the decline. We visit three of the region’s best-known street food areas – Bangkok, Singapore and Penang – to find out why.

A food hawker in Bangkok tells us his family’s stall, like thousands of others, was forced off the streets as part of a government move to clean up the city. Plus, Graihagh Jackson hears how these changes could have serious consequences for the city’s residents, many of whom have no kitchens at home and rely on cheap street food for their daily meals.

A family of street food vendors in Singapore, where the trade has been moved into enclosed food courts, tells us it’s long, hard and poorly-paid work, and that young people often have no interest in carrying on the tradition.

And in Penang, Malaysia, a government move to preserve local dishes by banning foreign workers may have backfired by removing a source of cheap labour vital to keeping many vendors afloat.

The mystery of mukbang