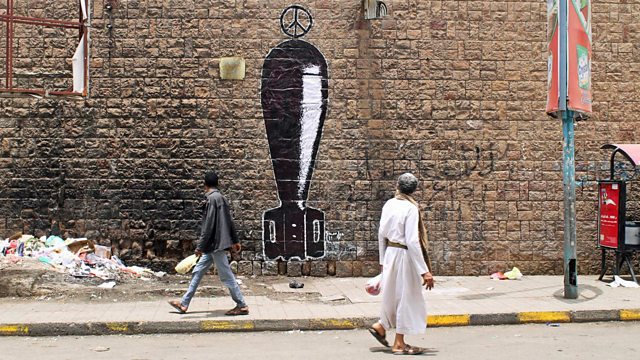 When war broke out in Yemen, Murad Subay began painting murals on the shelled and bullet-marked buildings of his home city of Sana’a.

When war broke out in Yemen, Murad Subay began painting murals on the shelled and bullet-marked buildings of his home city of Sana’a.
His colourful messages of protest and hope raised awareness of the conflict’s impact on Yemeni civilians. He encouraged passers by to join him as he worked, and together they filled ruined homes with images of peace.
Journalist Sumaya Bakhsh traces Murad’s journey as he leaves Sana’a for Cairo. International travel is rarely simple for citizens of Yemen, and we hear from Murad as he languishes in Egypt, stuck without a visa and unable to create new work. Murad is used to living and working in the toughest of conditions, but this period of inactivity is a new test for the prolific artist.
Eventually Murad receives a visa and arrives in the UK to launch a new campaign. Painting with Murad on the streets of London, Sumaya digs into his process as Murad explains why ultimately he must return to the conflict in Yemen, armed only with his brushes and spray cans.